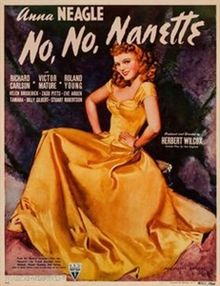 I am really not sure what to think of this movie.  On the one hand, it's perky and quirky.  On the other hand, it left me 100% unsure as to whether Nanette's uncle was a skirt-chaser or just misunderstood.  I'm bothered by that vagueness.  More about that in a bit.  Really, though, I feel like it should have been called "No, No, Uncle Jimmy."

So, when I was a kid, my mom and brother and I all watched The Lawrence Welk Show every Saturday night.  I loved it.  The singing, the dancing, the music, the costumes -- so much fun!  And one of my favorite performers on the show was Mary Lou Metzger because she was always cheery and fun, and she did a lot of the funnier songs.  At least once, she sang the song "No, No, Nanette!"  I found this video on YouTube that include it, so you can see it if you want to:

And ever since I first saw this song performed on the show, I've wanted to know what on earth Nanette was up to that people were always telling her not to do.  So when Phyl announced the Eve Arden blogathon, I looked Eve Arden up on imdb.com and saw that she was in a movie called No, No, Nanette and looked to see if it was available on either YouTube or Amazon Instant Video.  And it was, so I was like, "YES!  At last, I can find out what Nanette is up to!"

Random trivia thing:  There's another movie that's loosely based on the same play called Tea for Two (1950) that stars Doris Day and Gordon MacRae, though also with only the vaguest of resemblences to the play.  And Eve Arden is in that too!  I just found that out.  Kind of wishing I'd chosen to watch it for the blogathon instead, but then again, it's not free on Amazon right now, and this is, so... there you go.

Okay, so the plot of this particular film is that Nanette (Anna Neagle) lives with her Aunt Susan (Helen Broderick) and Uncle Jimmy (Roland Young).  And all these random, pretty girls keep getting money out of Uncle Jimmy by saying he made a pass at them when his wife wasn't around.  And Uncle Jimmy loves Aunt Susan, so he keeps paying them off, and Nanette keeps helping sort things out, and trying to keep her Aunt Susan from finding out about it all.  Except... Aunt Susan already knows.  ::cue dramatic music::

Also, there's this whole subplot where she's in love with this artist (Richard Carlson), but there's this producer (Victor Mature) who loves her too.

So it's supposed to be all cute and fluffy, except that I could never decide if Uncle Jimmy really was misinterpreted by all these women he innocently meets on a ferry boat or whatever, because there are a couple instances where he most definitely does this creepy-old-dude-stare-and-leer thing?  And so I'm really not sure?  And part of me thinks the subtext might be that he really was a creepy old dude?  But then we're all supposed to be happy when Aunt Susan takes him back at the end of the movie?

Now, the bright spot of this movie was actually Eve Arden.  She played this aspiring artist who can't paint at all well, but thinks she can, and she had these two dogs, and she pretends to have this ridiculous accent when she's actually from Kansas.  I got quite a few chuckles out of her performance.  Unfortunately, the quality of the video on Amazon (and the free one on YouTube) were so poor, I couldn't get any decent screenshots of her.  And there aren't any on the internet, really -- at least, none I could find by googling.  This is the best I could find!  She's the one in the center with the feather in her hair and some kind of feathered... purse?  muff?  thing on her arm. 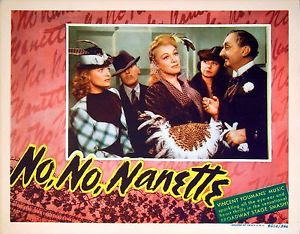 In the end, if you like Eve Arden or really daffy old movies, you might like this.  However, it's not one I feel compelled to watch again. 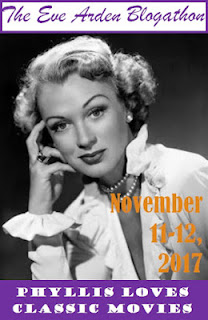