Been a while since I did one of these, huh?  Today I'm focusing on animated feature-length films.  I think it's a pretty nice mix of classic and modern, Disney and Pixar and some non-Disney too.  I've loved some of these since I was a small child, and others I saw as a teen or adult.  There's even one I just saw this past year and immediately loved so, so much. 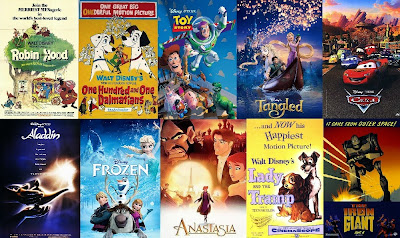 Ye olde story of Robin Hood robbing the rich to feed the poor and battling Prince John and the Sheriff of Nottingham... except, they're all animated, talking animals.  Hilarious and heartwarming and swashbuckling and wonderful.  I have loved this movie so long I can't remember the first time I saw it.

Two dalmatians and their owners stop the evil Cruella de Ville from turning 101 sweet puppies into a coat.  Much less grisly than it sounds, but at the same time, too dark for me to let my little kids watch it yet.

The whimsical, witty answer to that question of just what toys talk about when we're not around to hear them.  With a script co-written by Joss Whedon, you can't help but laugh at the characters as you fall in love with them.

Rapunzel paints, sings, wields a mean frying pan, and dances her way into the heart of an errant knave and the audience.  I first saw this last year, and after the first hour or so, I was like, "Well, this is nice."  But after the lantern scene, I was like, "I looooooooooooooooooove this movie!"  Yeah, it shot into the top 5 tier that fast.

A smirky race car gets stranded in a ho-dunk town run by an ex racing star who doesn't want the other townsfolk to know he used to be famous.  I first saw this at a drive-in theater, how perfectly fun is that?

A humble thief finds a genie, gets turned into a prince, and tries to steal a princess's heart.  I was so very nutty about this movie when I was a teen, and I just introduced my kids to it last month (minus a couple of the scarier bits).

Do I even need to tell you what this is about?  Princess Elsa accidentally unleashes an eternal winter and nearly kills her sister, but it turns out all you need is love, just like the Beatles said.  Visually stunning AND heart-warming (pun totally intended).

Two con men pass off an orphan girl as the missing Princess Anastasia of Russia.  Twist is, the orphan they pick?  Really is Anastasia.  First saw this at a friend's house my freshman year of college, during my first Thanksgiving away from home.  Love it, love the soundtrack, love the sheet music -- just a delightful movie.

A prim and proper Cocker Spaniel tames a hound dog with her innocence and loyalty to her humans.  Sweet and sentimental, yes, but sassy and funny too.

A lonely little boy befriends a giant robot, but fearful townsfolk think it's a Communist threat and try to destroy it.  This is a poignant look at growing up, friendship, acceptance, and love, and I wish more people had seen it.
Posted by Hamlette (Rachel) at 2:42 PM