I've missed doing this for a few weeks, thanks to one thing or another, but I'm back at last :-)  Today's quote comes from my second-favorite movie ever, The Fugitive (1993).  It's another movie I quote a lot, but with my kids being 1, 3, and 5 right now, I use this line the most lately: 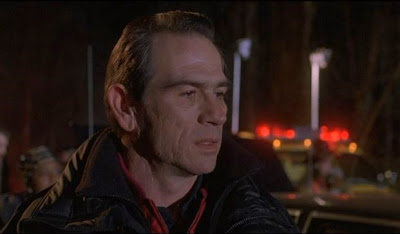 I've actually been to the place where they filmed the big train-and-bus wreck!  They used a real train and a real bus, not models, and it was the biggest wreck ever filmed to that date, IIRC.  They filmed it up on the Great Smoky Mountain Railway in North Carolina, and they filmed some of the chase stuff in that area too, like the river that Dr. Kimble swims in after he does a Peter Pan right offa that dam.

Man, I love this movie.

Click the button above to join the fun!
Posted by Hamlette (Rachel) at 9:08 AM