My camera died :-(  The one I named Haldir, that I got from Deborah Koren back when Dano was still in utero.  It's almost six years old, seen a great deal of use, and taken thousands upon thousands of pictures, so I guess I shouldn't be surprised.  Just sad.  He died right in the middle of a trip to DC with some visiting family members, and already I've missed a bunch of photo-taking opportunities, though I've been trying to capture things on my video camera (Yakima) than usual to make up for the lack.  I'm almost tempted to pull out one of my 35mm cameras (Gabriel, Marlowe, and my trusty Kodak) just to fill in the void, and may end up doing so.  Been a long time since I took one of them on an adventure, and I really want to get some shots of my daffodils that are blooming for the first time!

But anyway, thanks to a generous birthday gift from my dad, I've ordered a new camera.  It should look like this: 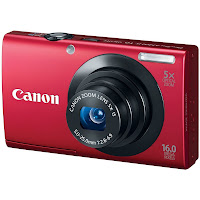 It's the Canon PowerShot A3400, and I don't know about you, but given the color and the fact that it has an A in its model number, I'm thinking it needs a very Asgardian name.  But I'll wait to decide until I actually get it :-)
Posted by Hamlette (Rachel) at 10:52 AM

Email ThisBlogThis!Share to TwitterShare to FacebookShare to Pinterest
Labels: cameras