I've seen X-Men 3: The Last Stand twice now. The first time it felt kind of disjointed, since there are really 3 storylines going at any one moment. Blipping from one to another to yet another got kind of irritating. The second time, though, I could latch onto little foreshadowings that I missed the first time. And I could anticipate the ouchy stuff and start feeling horrible about it whole minutes before it happened. I think poor Cowboy lost circulation in a couple fingers during one part.

You see, it's not a happy movie. Both times left me feeling like I was the one who'd nearly been flayed alive. But it also gave me several huge adrenaline rushes both times, and made me want to go do some slicing and dicing. If only I could figure out how to get my claws to emerge....

Some odd things happen in this movie. Mostly, there's Cyclops, who traditionally is my least-favorite X-Man (he's so whiny! So preppy! Such a pretty boy!). Cyke got broody and sexy! He should be scruffy all the time, wearing jeans and boots and letting his hair misbehave! 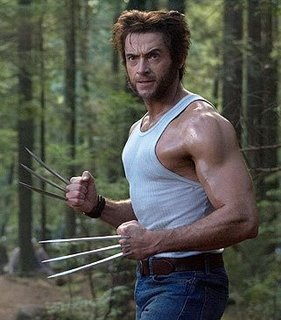 Not that I'd ever stop loving Wolverine best, of course. He's the broody baddish-boy with all the great lines. He's the one that always needs a hug. And he's been one of my three absolute-favorite superheroes since time immemorial (the other two are Robin and Spider-man, both also great with the one-liners...but Spidey from the comic books, not the movies). Besides, he's got claws. He wears jeans and wife-beaters. He's constantly scruffy. And when Hugh Jackman embodies him, he's got one of the greatest voices ever. Not to mention those Rudy-Valentino-esque nostrils. And okay, the muscles are nice too. Get nicer all the time, actually.

Anyway, yes, I quite liked X3. I didn't love and adore it the way I do X2, but it was worth seeing twice, and if someone like Noumenon or the Leatherneck wanted to go see it again and let someone tag along, I'd volunteer to do the tagging....
Posted by Rachel Kovaciny at 10:58 PM