I first saw State Fair (1945) when I was probably twelve or thirteen -- not long after we moved to North Carolina.  It was definitely after I had discovered a huge compendium of Dick Tracy comics at the library, because for years, I thought of Dana Andrews as "that guy with Dick Tracy hair in State Fair."  Which is not an entirely inaccurate description, actually.  He DOES have sleeked-back dark hair that never changes shape.
Anyway.  I've always been charmed by the fact that this movie takes place in Iowa, because I am an Iowa native myself.  Even though we moved away when I was three, my family roots are there because my parents both were born in and grew up in Iowa themselves.  So it's always been fun to sing along with "All I Owe Ioway" in particular. 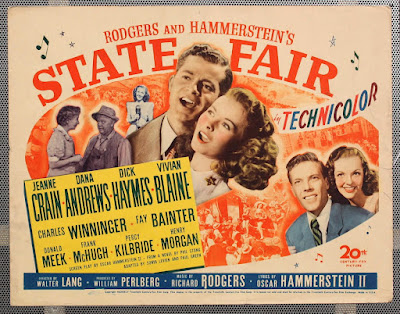 State Fair is the only musical that Richard Rodgers and Oscar Hammerstein II did NOT originally write to be a stage musical!  They actually wrote this specifically to be a movie, based on a book by Philip Stong.  The book had been adapted into a non-musical movie starring Will Rogers in 1933, but that version focused more on the father, while this focuses more on the daughter and son.  Hammerstein wrote the screenplay too, which I find pretty cool.
There's another movie version of State Fair, made in 1962, which stars Bobby Darin, Pat Boone, and Ann-Margret.  You'd think that would be my favorite version, due to the presence of my beloved Bobby Darin, and it does have some really good points -- but I actually prefer this one, over all.
It wasn't until 1969 that State Fair was turned into a stage musical.  It finally hit Broadway in 1996, and was co-directed by James Hammerstein (Oscar's son), who had produced the 1969 version as well. 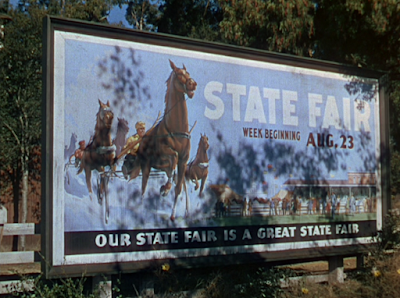 This is one of those movies that I sometimes imagine myself living inside.  I love the whole feel of it, from the tidy farm to the tiny camping accommodations at the fair to the fairgrounds.  I want to wear the costumes and ride the rides and try the mincemeat -- everything!
The story line is pretty simple: a farming family goes to the state fair filled with hopes and dreams, and not of all those hopes and dreams get realized, but most of them do. 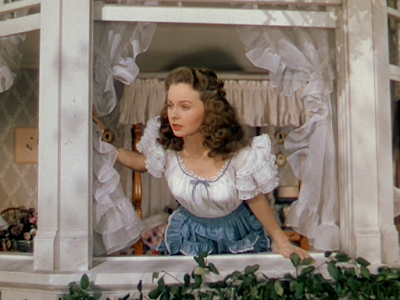 The family's daughter, Margy Frake (Jeanne Craine), doesn't quite know what she wants.  She just knows she doesn't want what she has: a very boring almost-fiance (Phil Brown) who wants to live in an ultra-modern plastic home on their ultra-modern farm and has planned every minute of their lives together before she even agrees to marry him.
It's hard for me to believe that this Jeanne Craine is the same woman who starred in Guns of the Timberland (1960).  I know fifteen years is a lot of time, but she even has different mannerisms and gestures, and her voice sounds different!  Kinda blows my mind.
Also, it's very crazy that Phil Brown, the boring almost-fiance, also plays Uncle Owen in Star Wars: A New Hope (1977).  I never would have guessed that either.  But I guess he does well at playing farmers? 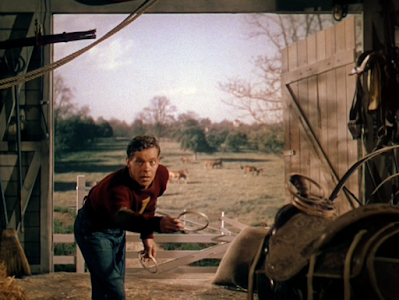 Anyway!  The family's son, Wayne (Dick Hymes), wants to prove he's not a sucker.  Last year, at the state fair, he got made fun of and played for a fool by a carnival barker with a ring-toss game, and he has spent all year practicing with his mother's embroidery hoops and his father's old saddle so that, this year, he will prove he's not a sucker. 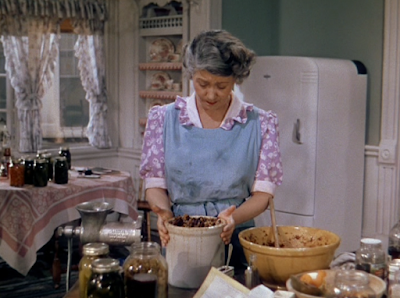 The mom, Melissa (Fay Bainter), wants to take first prize for either her pickles or her mincemeat.  She's not choosy which. 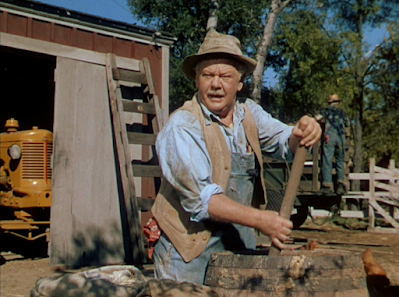 The dad, Abel (Charles Winninger) wants his prize hog Blue Boy to win a blue ribbon too.  Simple dreams for simple people living in a simpler world.  Did I mention I'd like to live in this movie?  If Margy moves out, can I have her room? 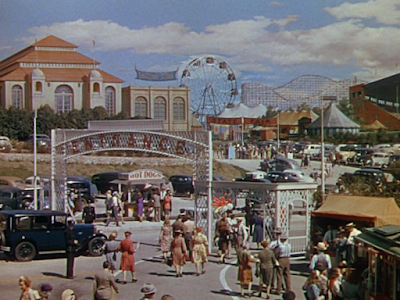 Everybody gets to the fair in due course.  I noticed something when watching this movie so I could write this review: everyone gets really dressed up for the fair.  Women are wearing dresses and hats and gloves, and the men are all wearing suit coats, often ties, and usually a hat too!  I want to go to a fair where everyone is dressed up!!!
Well, Wayne heads right out to the midway and proves himself to the same carnival barker (Henry "Harry" Morgan) who gave him a hard time the year before.  He also shows everyone in the crowd that the prizes at that game are worthless junk.  The barker doesn't take kindly to this, but a stranger (Vivian Blaine) backs him up and says her father's the chief of police.  That shuts the barker up.
Margy decides to prove to herself that she is not afraid of the roller coaster.  She used to like it, and then she got scared of it, or something.  Anyway, she gets on, and a stranger (Dana Andrews) sits down beside her, and it turns out she's definitely still scared of the roller coaster.  She spends most of the ride clutching the stranger's lapels and hiding her face in his chest.  Which, as you can see, he doesn't mind.  In fact, he thinks she's really funny.  Which she is.
After the roller coaster, he introduces himself: Pat Gilbert, newspaperman.  He's working for the Des Moines Register (an actual newspaper, btw) and covering the fair all week.  He and Margy hit it off big and go try out a lot of other carnival rides together -- strictly as research for the paper, of course.
Wayne discovers, quite accidentally, that the woman who stood up for him at the ring toss game is a singer named Emily Edwards who's with a band that's performing at the fair.  They get along just swell, singing and dancing the night away.
Not everyone gets their happy ending, though.  Oh, Margy finds what she didn't know she wanted, Melissa does better with her mincemeat than she could ever have dreamed, and Blue Boy makes Abel proud as can be.  Poor Wayne, though, discovers he's still a naive kid who's easy to fool.  And then he learns from his experiences and grows up, so he ends up okay too. 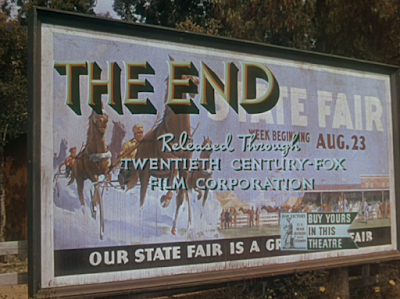 Now, as to whether or not Dana Andrews has Dick Tracy-esque hair in this movie, well, I still think he does.  See? 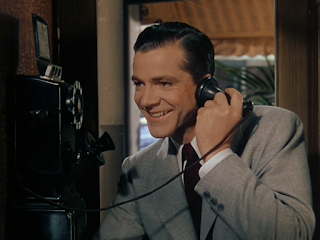 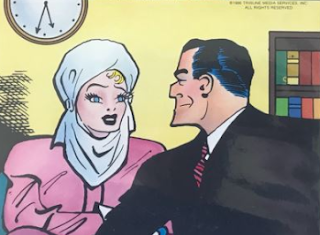 I rest my case.
Is this movie family friendly?  Mainly, yes.  There's a little kissing, the implication that Pat has a history of dating a LOT of women, and Wayne ends up getting drunk.  But there's no bad language, no tawdry or smutty content, and the only violence is one well-thrown punch.  I showed this to my kids a few years ago already. 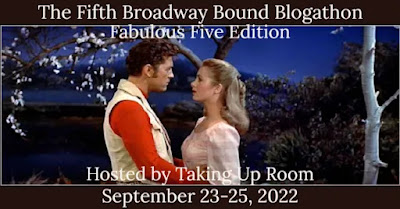 This has been my contribution to the Fifth Broadway Bound Blogathon hosted by Taking Up Room all weekend. Check out this master post for links to all the entries!
Posted by Hamlette (Rachel) at 10:48 PM