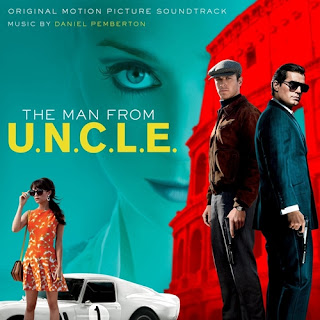 Daniel Pemberton created a fun, retro soundtrack for the 1960s-set Man from U.N.C.L.E. (2015) that perfectly suits the film's upbeat vibe. Pemberton uses lots of period songs from icons like Nina Simone and Roberta Flack, as well as what I think must be European pop music from the era. Several times in the film, these period songs begin as something playing on the radio, then swell to be simultaneously diagetic and non-diagetic, which is a fun way to suck the audience into the film. I'm not going to share any of those today, though -- instead, I'm going to focus on my four favorite original tracks. Rather than a lush orchestral sound, Pemberton chose to write stripped-down songs using only a few instruments, rather like a band in the '60s. The results are, I must say, pretty groovy.
"His Name is Napoleon Solo" has a lovely swagger, but a thread of tension and worry running through it as well. The swagger is for Napoleon Solo, who's being discussed during the scene where this plays, and the tension and worry are for Illya Kuryakin, who is being briefed on this potential adversary early in the movie. The two emotions weave around each other in interesting ways, much like the two characters when they are forced to work together.
"Circular Story" has almost a spaghetti-western sound to parts of it, which at first seems weird, cuz what does a movie about spies in the '60s have to do with spaghetti westerns? Ah, but those are called "spaghetti" westerns because they were filmed in Italy, many during the '60s, and much of this film takes place in Italy, so... it makes sense in the end. (There's even part of an Ennio Morricone song used in the movie, though it's not on the soundtrack.)
"Take You Down" gets used during my absolute favorite moment in the movie, a moment that is glorious, brilliant fun that makes me want to stand up and cheer, though in the theater I contented me with just clapping. It's one of those moments that, when I know it's coming soon, I start bouncing up and down and grinning madly. This song is a celebration of revving engines, speed, and the joy of the chase. The Morricone influence is back here too, with that opening "Wah-wah-wahhhhhh" reminding me so much of the beginning of the main theme for The Good, the Bad, and the Ugly (1966).
"The Unfinished Kiss" is about as different from the previous track as possible. It's tender, wistful, hesitant. But still strong and determined -- such a fascinating contrast!
Well, there you have it: one of my favorite soundtracks, from one of my favorite movies.  Ciao!
(This review originally appeared here at J and J Productions on September 8, 2015.)
Posted by Hamlette (Rachel) at 10:48 AM