My Ten Favorite New-to-Me Movies of 2021

It's that time of year when the world tells everyone who will listen just what they fell in love with over the past twelve months.  I already shared my top ten lists for books on my book blog, so it's high time I share my movie list too, eh?  Here are the ten movies I liked best of all the movies I watched for the first time in 2021. 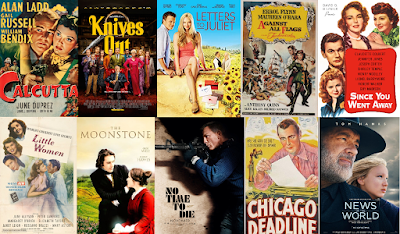 1. Calcutta (1947).  A wary pilot (Alan Ladd) gets mixed up with a dewy-eyed dame (Gail Russell) who was engaged to his recently-murdered best friend.  One of Ladd's best noir outings, and the first of his movies to hit the top of one of my end-of-year lists!  Can you believe that?!?
2. Knives Out (2019).  A wealthy mystery author (Christopher Plummer) dies, and everyone in his large and weird family (Chris Evans, Jamie Lee Curtis, et. al.) suspects everyone else of having killed him.  Only an enigmatic private detective (Daniel Craig, whose southern accent is not as bad as I was led to believe) has any inkling of the truth for a long time.  My husband and I were so wrapped up in this movie that we watched the whole thing after our kids went to bed one night, staying up until midnight (very late, for us) to finish it.
3. Letters to Juliet (2010).  A lonely girl (Amanda Seyfried) on a pre-wedding trip to Italy gets caught up in a little band of women who answer love-advice-seeking letters written to Shakespeare's fictional Juliet.  She ends up helping answer a decades-old letter, which leads an elderly woman (Vanessa Redgrave) to arrive in Italy seeking her long-lost love (Franco Nero).  My favorite thing is that I grew up watching Redgrave and Nero play Guinevere and Lancelot in Camelot (1967), and they're a couple in real life too, so seeing them together again here is just marvelous.
4. Against All Flags (1952).  A roguish naval officer (Errol Flynn) pretends to be a pirate in order to infiltrate a pirate stronghold, only to find himself falling for a strong-willed, lemon-tongued Pirate Captain (Maureen O'Hara).  Jolly good fun.
5. Since You Went Away (1944).  A mother (Claudette Colbert) stays home and cares for her daughters while her husband is away fighting WWII.  I wish I'd seen this when I was in my Joseph Cotten phase because he is just yummy here.  Not that I still don't have a soft spot for him, because I do, but... you know what I mean.
6. Little Women (1949).  Meg (Janet Leigh), Jo (June Allyson), Beth (Margaret O'Brien), and Amy (Elizabeth Taylor) March do some growing up during the American Civil War with help from their mother (Mary Astor), their next-door neighbor (Peter Lawford), and a kindly German professor (Rossano Brazzi).  Probably never going to be my favorite version of this story, but I really liked Allyson and O'Brien in particular.  Again, wish I'd seen this when I was going through my Peter Lawford phase because he's at his most charming in this.
7. The Moonstone (1996).  A young woman (Keeley Hawes) receives a fabulous jewel for her eighteenth birthday, but it disappears, and she suspects the man she loves (Greg Wise) of having stolen it to pay off gambling debts.  I was kind of disappointed by the 2016 BBC version, so I sought this one out, and I'm so glad I did!  Much better.
8. No Time to Die (2021).  James Bond (Daniel Craig) grows up.
9. Chicago Deadline (1949).  A news reporter (Alan Ladd) finds a girl (Donna Reed) dead in a cheap rooming house, finds her address book before the police do, and goes around trying to figure out what her life was like and why she died so he can write an article about her.  It's pretty noir, but not deeply dark.
10. News of the World (2020).  A man (Tom Hanks) who travels around reading the news aloud to people in small, far-flung Texas settlements takes on the job to delivering a child (Helena Zengel) back to her family.  She's been rescued from her Kiowa captors, but she'd lived with them for so long she only speaks Kiowa anymore, and she's obviously got a lot of trauma in her past.  So does he, and the two bond during the journey.  I like stories of found families, lost and damaged people helping each other heal, and westerns, so... yeah, totally dug this movie.
Posted by Hamlette (Rachel) at 4:34 PM