I have such fond memories of this movie. Watching it for the first time over Thanksgiving break my freshman year of college. Loving it so much, I bought a copy of the movie AND the soundtrack as soon as I got back to school. Sharing the movie with my parents and some of their friends, all of them expecting not to like it, and all of them enjoying it. I have most of the major songs memorized, and quite a few of the lesser-known as well. 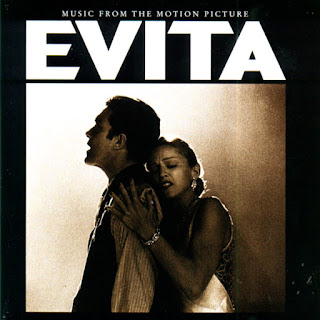 Although The Phantom of the Opera is the first Andrew Lloyd Webber musical I heard, Evita is the first I saw because it was made into a movie starring Antonio Banderas and Madonna. The movie is rich, nuanced, probably wildly historically inaccurate, and wonderful.
Everyone knows "Don't Cry for Me Argentina," so I won't say much about it here. There's a reason it's famous, though -- it's quite stirring. I'm always disappointed it's not actually about a guy named Argentina, though. I heard it before I saw the movie, but I didn't know the story line at all, so I made up what I thought it was about.  I thought it was her saying goodbye to a guy she nicknamed Argentina and telling him not to miss her.  Sigh.  Well, it was a cool idea.
One of my favorites is "Another Suitcase in Another Hall."  I like how subdued and heart-achy it is. Much of Evita is militant and brash, but this is very emotional. It's about how young Eva has to turn to being a "kept woman" to support herself, but she never stays with a man long, so she always ends up holding her suitcase, standing in a hall outside a place she's leaving.
Here's a much more fun song, "And the Money Kept Rolling In (And Out)." This one has such a great energy, and of course, lots of Antonio Banderas singing. In the musical, his character Che is the narrator, but he also interacts with other characters, he doesn't just stand on the sidelines and watch, though sometimes he does that too. It's a really nifty device, and one of my favorite things about Evita. In this song, Che is explaining how, once she's the first lady of Argentina, Eva starts this fund to help the poor, but everyone's so busy collecting and distributing the money, no one's keeping books, so there might be some corruption going on, but who cares as long as the money keeps pouring out, right?
"High Flying, Adored" is my most-favoritest song on the whole soundtrack. Che singing about how Eva has become super famous, but so easily and so young that she's in danger of becoming bored with everything. It is elegant and soaring and delicious. Eva insists it won't be a problem, she's not convinced she's that special.  Che knows better.
Even if you don't like musicals (and that's not a sin), if you're interested in politics, corruption, or the history of South America (though I've heard this is not entirely accurate), you might enjoy it. It's only rated PG, but there is a lot of innuendo, the Argentinian version of the middle finger, some rough language, and violence. You can read imdb.com's Parent's Guide for it here if you want to know more.
Also, it's a light opera more than just a musical -- nearly every line is song, as is typical for Andrew Lloyd' Webber's shows. People don't dance about and burst into song only periodically, they do that for the whole movie.
I remember reading once that, as a young man, Antonio Banderas lived in an apartment with thin walls next door to a theater where people were performing Evita, and he learned all the songs by hearing them over and over that way. So when he was cast as Che, he didn't have to learn any of the lyrics because he knew them already! That story makes me grin :-D
(The bulk of this review originally appeared here at J and J Productions on August 25, 2015.)
Posted by Hamlette (Rachel) at 4:04 PM