Time to finish off this tag!  See yesterday's post for my answers to the first nine questions. 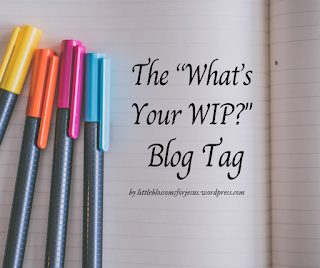 Again, here are the tag rules:
What’s your favorite scene so far (if you can tell about it without spoilers!)? Can you give us a snippet? 😉
Marta and Mr. Wendell are walking down the road while he tells her how he got his scars, and what he lost because of them.
And, yes, here's a snippet:

This time I did not stop my hands.  I wanted somehow to comfort, to reassure him.  He sounded so broken when he related those last words, so lost.  Almost, I could not comprehend that anyone could say such words about this good, kind man.  Not when he had been so hurt already.  I reached out and laid my hand on his arm.  Not like I was taking his arm to walk somewhere, but only resting it there so he would know he was not alone.
We stood there, my hand on his arm, not looking at each other, but facing the bench, the rose bushes, and the mountain.
Finally, I said, “Thank you for explaining so much.  You had no need, but I am understanding much more now.”
Slowly, Mr. Wendell reached over with his other hand and placed it over mine.  He met my gaze.  “I think I did need to.  I needed you to know.”
I wanted to be standing there forever, my hand under his, his gaze on mine.  And that was why I slowly pulled away.  I made my voice as kind as I knew how.  “I am glad to have listened, then.”  Before he or I could say more, I hurried back to the house.  Too many thoughts swirled in my head, mixing and bumping like vegetables dropped in a stew pot.  I needed to sort them out in peace.

Is the story still what you thought it would be or has it thrown you a couple curve balls?
This is making me chuckle.  The story overall?  Still what I expected.  Individual scenes?  Generally not what I expected.  It seemed like almost every time I'd sit down to write, and have an idea in my head of what scene I would work on and where it would go, the characters would smile fondly at me and steer the whole thing in a totally new direction.  Which would always be better than where I'd thought it would go.  I'm used to that happening a few times in a book, but over and over and over?  It was very interesting!  I guess my subconscious had ideas that it wasn't telling my conscious mind, but which would come out when I wrote, which was pretty cool.
I also thought some people were going to die, but now they don't.  At all.  That's super normal for me, though.  I have lost track of how many books and short stories I've written where I totally planned to kill someone off, and then I just had to pardon them because I couldn't kill them after all.  If you read one of my books and someone actually dies in it, you'll notice it's just about always a really evil villain.  I know that losing a side character along the way can up the stakes for a protagonist and whatever, but I just... have a hard time being that mean to my characters!  I love these imaginary people!
Is there a Bible verse, poem, hymn, picture, or quote that helped shape this story?
While writing the first draft, I often had part of Psalm 27 running through my head, the refrain of the way it's set to music in our church's hymnal:

That really resonated with me for Marta's story, but also for Mr. Wendell's.  And for Marta's brother Jakob, too.  They all have moments of deep fear in this book, and they all lean on the Lord for comfort and help.
When and where have you done most of the writing so far?
I kind of talked about this yesterday too, but a lot of this book has been written at a local coffee shop on Saturday mornings and/or Sunday afternoons, plus here at my house at night after my kids go to bed, whenever I have mental energy left.
Where do you get inspiration for this story?
My Great-Great Grandma Peters came to America from Germany in the late 1800s.  She went to a cooking school and was a chef in New York City before marrying a fellow German immigrant and moving out to the Midwest.  She taught her daughter Augusta all about making fantastic breads and pies from scratch.  Augusta was my dad's grandma, and she lived with my dad's family when he was growing up.  He still speaks glowingly of her homemade bread and pies.  That idea of a German immigrant with impressive cooking and baking skills just popped out at me when I was thinking of retelling Beauty and the Beast as a story with immigrants, and Marta sort of whooshed into being as a result.
As for inspiration to keep working on a book, I keep my creative juices flowing by watching a lot of movies and TV shows, reading books, and listening to a lot of movie soundtracks and Bobby Darin.  I also got a lot of inspiration from the research I did into Colorado gold and silver mining history -- that really helped Mr. Wendell's backstory and personality take shape. 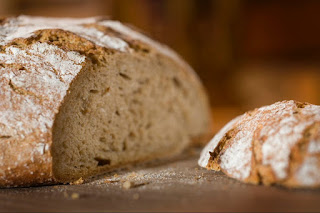 Are you a plotter or a pantser?
I'm a plantser.  If you compare a story to a tree, then I need to know where the trunk and the big branches are before I start writing, and how tall it is.  In other words, I need to know the basic plot, some major plot points along the way, and exactly how it all ends.  But the leaves and smaller branches get added as I go.  Which means I get plenty of surprises as to how we get to the end, and any subplots, side characters, things like that.
I tried outlining a book once.  Wrote up a nice, complete outline for exactly how the book would go, wrote two chapters, got incredibly bored because there were no surprises left for me, and abandoned it.  I'm also not great at just having a character and a vibe and seeing what happens.  So I'm in between the two.
Do you have a little ritual before you start writing?
Sorta?  I have a system, but it's not exactly a ritual -- I don't chant or mutter incantations or turn in a circle three times, or anything ritualistic like that.  But I do have a system!
I either make or buy something warm to drink (depending on whether I'm at home or the coffee shop).  I pull up some music on my computer -- for MRAMR, I've mainly been listening to the Quigley Down Under soundtrack by Basil Poledouris.  Then I pull up the copy of my WIP doc that's stored in my Dropbox and save it to the hard drive of the computer I'm working on.
(When I write at the coffee shop, I use my laptop, but at home, I usually use our desktop.  Since I don't always know where I'll work next, I always end a writing session by saving it to my hard drive, then to my Dropbox account.  And I always start by opening it from Dropbox and saving it to my hard drive -- that means I have two copies of my latest version at all times, and another that's close to that latest version saved on a totally separate hard drive.  Which means I almost never lose what I've written.)
If I am at home, I might light a candle.  I might not.  Then I read back over the previous scene so I can ease into the new part... and then I write forward. 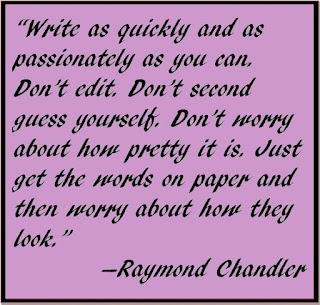 Are you thinking of publishing this story?
Absolutely!  It will be book four of my Once Upon a Western series.
What things have you learned while writing this story?
My research has taught me about mining towns, miners, mine accidents, bear attack survival, German guilds, German bread baking practices, the history of Colorado, Chinese immigrants in the 1870s, baking at high altitudes, the availability of tea in Colorado in the 1870s, prices for bread in mining camps versus towns versus cities, the Franco-German War of 1870-71, wages for servants in various areas of the country in the 1870s... I have learned a LOT while writing MRAMR!  And I always do.  That's something I love about writing historical fiction!
Now!!!  The time has come to tag some fellow writers.  Except, this tag has been around for a while, and I have been so busy the last year or so that I am really behind on reading blogs... so I don't know who's already done this, and who hasn't.  If YOU want to do this tag, then you are hereby tagged!
I hope you've enjoyed this peek behind the scenes of My Rock and My Refuge and my writing process!
Posted by Hamlette (Rachel) at 2:26 PM

Email ThisBlogThis!Share to TwitterShare to FacebookShare to Pinterest
Labels: "My Rock and My Refuge", blog tag, Once Upon a Western, writing, writing process