Glenn Ford is one of my top five favorite actors.  It took me about twenty years to realize he ranked that highly on my list, but he truly does deserve that spot.  I have never seen him turn in a performance I did not enjoy, and some of his movies are incredibly dear to my heart.  So here are my ten favorite films of his! 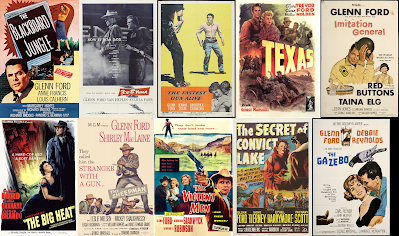 1. Blackboard Jungle (1955) A WWII-vet (Glenn Ford) becomes a teacher at an inner-city NYC high school where the other teachers have given up trying to educate the hoodlums in their classrooms.  Though he tangles with one particularly vicious student (Vic Morrow), this new teacher manages to get through to most of the students, including one bright kid (Sidney Poitier) with a big chip on his shoulder.

2. 3:10 to Yuma (1957) A down-on-his-luck rancher (Van Heflin) takes a job transporting a wily outlaw (Glenn Ford) to the train that will take him to the state penitentiary in Yuma, Arizona.  The outlaw does everything in his considerable powers to convince the rancher to let him go, resulting in a simmering suspense story that eventually boils over in a surprisingly upbeat climax.

3. The Fastest Gun Alive (1956) An unassuming shopkeeper (Glenn Ford) is secretly also the fastest draw in the west.  His reputation keeps drawing bad men to him, eager to see if they're faster than he is, which causes a lot of trouble for him, his wife, and the town they moved to recently.

4. Texas (1941) Two young Civil War veterans (Glenn Ford and William Holden) have a series of adventures in Texas as they try to make their way in the world, one of them on the right side of the law and one on the wrong.

5. Imitation General (1958) A non-com (Glenn Ford) pretends to be a general to boost morale of a group of American soldiers cut off from their own lines during WWII in France, with humorous results.  Red Buttons and a very young Dean Jones both add so much to the fun.

6. The Big Heat (1953) A widowed policeman (Glenn Ford) tracks down the criminals who murdered his wife (including a vicious one played by Lee Marvin) with help from a former pal of theirs (Gloria Grahame).

7. The Sheepman (1958) A sheep rancher (Glenn Ford) insists on raising his sheep in an area dominated by cattle ranchers, no matter how much they pressure or cajole him to be rid of the wooly beasts.  The presence of a stubborn and sassy woman (Shirley MacLaine) elevates this above turning into yet another range war picture.

8. The Violent Men (1955) A small rancher (Glenn Ford) is pressured by a big rancher (Edward G. Robinson) with a nasty wife (Barbara Stanwyck) to sell his land to them, but he gets all stubborn and refuses, and then things get violent, as you might expect from the title.

9. The Secret of Convict Lake (1951) A bunch of escaped convicts (led by one played by Glenn Ford) hide out in a snowbound farm town inhabited mostly by women (particularly one played by Gene Tierney) left behind by the men who are part of a posse chasing the convicts.

10. The Gazebo (1959) A playwright (Glenn Ford) gets blackmailed over some scandalous old photos of his actress wife (Debbie Reynolds) and decides to kill the blackmailer rather than keep paying him.  Which leads to very dark comedy that has me in absolute stitches, though my husband didn't find it nearly so funny because he said that Glenn Ford was too good at communicating fear and worry, and so my husband just kept feeling afraid and worried for him.  So YMMV. 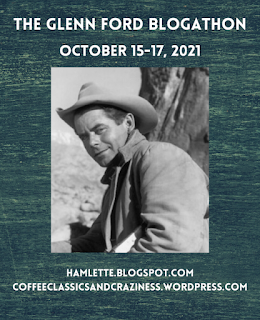 This has been my first contribution for the Glenn Ford Blogathon that I am co-hosting with Coffee, Classics, and Craziness this weekend!  Check this post for the list of contributions.