I mostly love Imitation General (1958) because it feels like an extended episode of my favorite TV show, Combat! (1962-67).  I expect the characters from that show to just come marching up over some hill on the horizon and set about helping the people in this one fix their problems.  They never do, but I feel like they might at any moment.  There are just so many similarities between the two!

For one thing, Master Sergeant Murphy (Glenn Ford) carries a Thompson machine gun just like Sergeant Saunders (Vic Morrow) has on Combat!.  The sound effects for it aren't quite the same (not so smooth and purring as Saunders'), but oh well.  It's still a Thompson, my favorite weapon of all time.  (Shh, yes, even over a Winchester repeater or a Colt .45.)

Also, these soldiers are wandering around what's supposed to be the French countryside after D-DAY, but is obviously the rolling hills of southern California outside Culver City, exactly where Combat! filmed quite a few episodes.

Not only that, but they even have fight off a German soldier played by Paul Busch, who appeared in thirty-five episodes of Combat! -- more than 1/5 of the episodes!  I mean, how can my beloved Second Squad be far away?  I don't think we even find out what outfit these soldiers are with, so I have headcanoned them into the 361st Regiment and figure they'll meet up with King Company sooner or later.
Actually, the Combat! episode "The Prisoner" has a lot of similarities to the plot of this movie, now that I think about it.

Anyway, Imitation General is called a comedy, and it does have a lot of funny parts.  But it's also a good war movie, with lots of action that's deftly executed.  And it's a pretty good character study too, looking at the way that responsibility affects people, how important leadership is, and so on.  The storyline is quite serious, it's just the way characters react to things that makes it funny.  Well, and a few sight gags, plus Red Buttons making a lot of amusing faces.

Brigadier General Lane (Kent Smith) is touring near the front lines, boosting morale with his presence and getting a more accurate picture of how the war is going.  His driver, Corporal Derby (Red Buttons), worries constantly that they're all going to be killed, and keeps trying to convince the general to go back to headquarters.  His aide, Master Sergeant Murphy, does what he can to keep them all safe, ever vigilant and ready to defend the three of them when needed.

Unfortunately, General Lane chooses to protect his sergeant instead at a critical moment, and takes a bullet in his place.  Right about then, the Krauts make a big push and cut off the American troops in that area from the rest of the Allied forces.  Murphy and Derby hide in a half-ruined farmhouse, where they've dragged the general's body to keep it out of enemy hands.

A worried corporal named Sellers (Dean Jones) wanders into the farmhouse, convinced he's got shell-shock and should be in a hospital.  Really, he's just freaked out at discovering he's scared of getting killed, and once Murphy convinces him of that, he's pretty brave for the rest of the story.  But he thinks that Murphy is a general because he's holding General Lane's helmet, and Murphy uses that mistake to boost Sellers' morale.  And then Murphy realizes that, if everyone thinks he's a general, he can rally the troops and lead them in fighting their way out of the pocket the Krauts have sewn them into.  So he sets about doing exactly that.

The trouble is, there's this private named Hutchmeyer (Tige Andrews) who knows Murphy from earlier in the war and has a grudge against him.  Most of the funniest parts of this movie come from Derby's efforts to convince Hutchmeyer that Murphy is dead, and also keep him from discovering that Murphy is pretending to be General Lane.

Various exciting things unfold, like Murphy and Sellers taking on a bunch of Germans by driving straight at them a Jeep with half a metal water tower tied to the front.  There are also several tanks involved, including one driven by the aforementioned Paul Busch.

And there's a local French girl, Simone (Taina Elg), that Murphy and Hutchmeyer both take a shine to.  Everything turns out okay in the end, I assure you, just like it would if it was one of the more light-hearted episodes of Combat!.

Is this movie family friendly?  Basically.  Simone takes a bath, so you get to see her bare shoulders and legs, as shown on the lobby card at the top of this post.  Soldiers leer at her, Hutchmeyer obviously wants to seduce her, and there's some dialog about soldiers missing/yearning for women.  At one point, a character pretends to be attacking Simone violently to convince another character to leave the premises, but it's a sham and the audience knows it.  The wartime violence is all non-bloody, like you'd expect from a 1950s movie.  I don't recall any cussing.  I would show this to my kids, and most likely will one of these days. 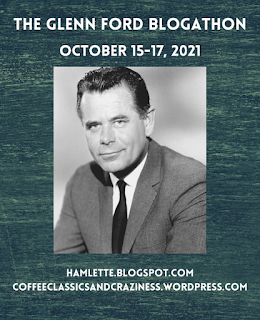 This has been my second contribution to the Glenn Ford Blogathon, which I'm co-hosting with Coffee, Classics, and Craziness this weekend.  Check out this main post to find all the other contributions!
Posted by Hamlette (Rachel) at 10:21 PM