I've loved I Love Lucy (1951-57) since I was a tween.  I saw my first episode at twelve, when my family moved to NC and we gained a video rental store that had lots and lots of classic TV shows on VHS.  Not full seasons, but "best of" compilations and such.  A couple of years later, a new TV channel started up that showed classic TV, which is how I discovered many of my favorite shows.  I Love Lucy was among the shows they ran, and we spent so many happy half-hours laughing over those as a family. 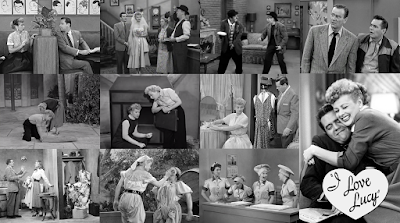 So here are my ten favorite I Love Lucy episodes.  Are any of them favorites of yours?

1. "Hollywood at Last" -- Lucy, Ricky, Fred, and Ethel arrive in Hollywood for Ricky's new job as a movie star, and Lucy sees William Holden at the Brown Derby, with ridiculously funny results.  Also ridiculously funny:  this is the first thing I ever saw William Holden in!  (After all, I was twelve and was only just starting to get into movies.)  I didn't know he was a REAL movie star, and when I learned that he was actually very famous, that made it all even funnier to me.

2. "The Marriage License" -- Lucy finds a typo on her marriage license and is convinced that means their marriage is invalid, so she makes Ricky take her back to the tiny town where they were married years earlier.  This is probably my husband's favorite episode.

4. "Lucy and John Wayne" -- (You knew this was going to be here, right?) A sequel to "Lucy Visits Graumann's," in which Lucy and Ricky have to figure out a way to get John Wayne to make new cement footprints to replace the ones Lucy stole and then broke.  I'm endlessly entertained by how many different confused and bemused expressions John Wayne goes through in half an hour.

5. "Lucy Visits Graumann's" -- Lucy decides the perfect souvenir from her visit to Hollywood would be the slab of cement with John Wayne's footprints in it.  No wonder I love Lucy!  That would be my ideal souvenir too!  Unlike Lucy, I'm pretty sure I wouldn't actually manage to steal it, though.

6. "The Anniversary Present" -- Ricky gets a neighbor woman to help him with a surprise for Lucy, but Lucy thinks he's in love with the neighbor.  I love it for the part where Lucy and Ethel try to eavesdrop from the basement but keep getting interrupted by someone yelling at her husband to eat his lunch.

7. "Lucy's Schedule" -- Lucy makes Ricky look bad in front of his boss by being late, so he puts her on a tight schedule.  Lucy then sticks to it rigorously.  Which sounds boring, but isn't.

8. "New Neighbors" -- Lucy thinks the new neighbors are plotting a murder, and she convinces Ricky, Fred, and Ethel of this.  I mostly love this one for the part where Lucy disguises herself as a chair.

9. "Lucy's Italian Movie" -- While visiting Italy, Lucy gets asked to be in a movie.  She thinks it's a movie about making wine and decides to go all Method and gets a job at a vineyard stomping grapes.  Slapstick ensues.

10. "Job Switching" -- Ricky and Fred think the girls are spending too much money, so the girls offer to switch roles with them.  The guys have to keep house, and the girls have to get a job.  This is mostly famous as the one where Lucy and Ethel work at a candy factory, but I think Ricky and Fred trying to cook and do housework is even funnier. 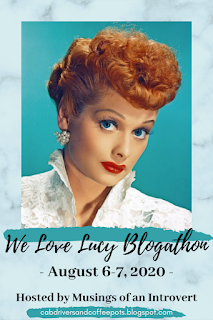 This list is my contribution to the We Love Lucy Blogathon hosted by Musings of an Introvert today and tomorrow to celebrate Lucille Ball's birthday!  I'd almost forgotten how much fun I have making these top ten lists -- keep an eye out for more in the near future!

It's been a long time since I watched I Love Lucy, and I just realized that it's high time I introduce my kids to it!  So I ordered the complete series on DVD today and can't wait to revisit this show -- and watch all the episodes I haven't seen yet!  Thanks for reminding me how awesome this show is, Carissa :-)
Posted by Hamlette (Rachel) at 3:41 PM