My Ten Favorite Episodes of "The Magnificent Seven"

Y'all knew The Magnificent Seven (1960) was a movie.  You probably even knew they did a remake (2016).  But did you know there was also a short-lived TV series back at the end of the '90s?  Well, there was!  And it's actually really fun!  I've watched both seasons twice, and some favorite episodes a few more times than that.  Maybe some day I'll review every episode like I've done for The Mandalorian so far.  But until then, you'll just have to be content with this list of my ten favorite episodes. 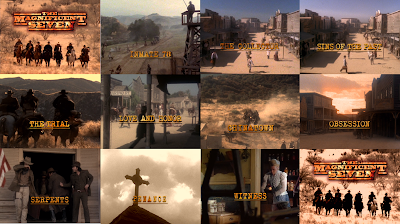 1. "Inmate 78" -- Chris (Michael Biehn) is dry-gulched and sentenced to five years hard labor on trumped up charges.  Vin (Eric Close) and the others have to figure out what happened to him.  There's a two-part episode of The Big Valley ("Legend of the General") that this reminds me of SO MUCH, and I feel like bits of it might even be an intentional homage to that.

2. "The Collector" -- The Seven help out a widow (Anne Haney) and her niece (Dana Barron) who are about to lose their home to an underhanded land-grabber.  Vin develops a soft spot for the widow, who reminds him of his mother, while JD (Andrew Kavovit) takes a shine to the niece.

3. "Sins of the Past" -- Vin's past troubles catch up with him in a big way, plus Ezra (Anthony Starke) battles with his mother (Michelle Phillips) over who will have the best gambling palace in town.  Since Vin is my favorite, and this is a fairly Vin-centric ep, it's no wonder it's a big favorite for me.

4. "The Trial" -- Nathan (Rick Worthy) is reunited with his long-lost father (Carl Lumbly), a former slave who is promptly accused of murdering a white man.  The Seven protect him from vigilantes and, together with Judge Travis (Robert Vaughn), they see to it that justice prevails in the end.

5. "Love and Honor" -- Buck (Dale Midkiff) stands up for a young woman against a cruel abuser (Jesse Borrego) and ends up having to fight a duel with swords in her defense.  It sounds far-fetched, but it works really well, especially because it lets Buck's inner nobility shine.

6. "Chinatown" -- The Seven try to protect Chinese immigrants working on the railroad from a mean overseer.  Ezra ends up buying a young woman (Kathleen Luoung) to save her from being trafficked.  This ep is especially notable for two of its guest stars: John Cho (who went on to play Sulu in the new Star Trek movies) and Brad Dourif (who went on to play Grima Wormtongue in the Lord of the Rings movies).

7. "Obsession" -- This is the final episode of the series, alas.  Chris reunites with an old flame and considers leaving the Seven for her.  But when he finally comes face-to-face with the person responsible for the deaths of his wife and son, his whole world changes.

8. "Serpents" -- The Seven find a satchel full of money in a dead man's hotel room, and Ezra wrestles with all his inner demons as he fights his desire to run off with it.

9. "Penance" -- Josiah (Ron Perelman) is the main suspect for a string of ritualistic killings, and the rest of the Seven have to figure out who is actually responsible.

10. "Witness" -- The young son of Mary Travis (Laurie Holden) comes to visit, bringing his terrified memories of his father's murder back into his mind.  Mary looks to Chris and the rest of the Seven to help protect him, and they expose her husband's murderer in the process. 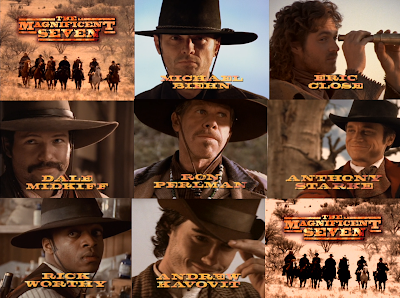 Tell me, have you ever watched this show?  Both seasons are available for free on Amazon Prime Instant Video right now, if you're looking for some Old West fun!

I'd rate the series as a whole at PG-13 -- if you've watched Dr. Quinn, Medicine Woman, then you're familiar with the basic content level, though this is a little less family friendly as it focuses on a group of adult men, not a woman and her adopted children.  Only one episode ("Working Girls") is truly skippable (though I really don't like "Wagon Train" parts one and two because Vin has an out-of-character fling with a married woman and it makes me growl at the writers).  Episodes have some low-level cussing, western violence involving fists and guns and other weapons, some kissing, and the occasional implied liaison between two consenting adults.  No nudity, but a fair amount of suggestive dialog.  Also, Josiah lives in the church and supposedly was trained to be a Christian preacher, but he's all about embracing all world religious and routinely spouts some pretty heretical stuff.  I won't let my kids watch it right now (oldest is 12), but when they all get to be in their middle and upper teens, I will. 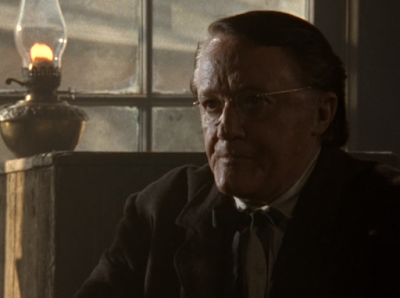 And yes, the late Robert Vaughn plays a recurring character in both seasons!  He's a circuit judge, so he's not always there, but he has some very meaty episodes.  He's the only member of the cast from the original film to appear on the show.

This is my last contribution to this year's Legends of Western Cinema Week.  If you haven't entered my giveaway or played the games I posted yet, better do so today because I'll be drawing winners for the giveaway and announcing people's game scores tomorrow!
Posted by Hamlette (Rachel) at 12:26 PM