#WIPjoy in July -- Which Character Week

The final week of the #WIPjoy prompts was the most fun for me.  It was all about contrasting characters, and Dancing and Doughnuts has a much bigger cast than Cloaked and "The Man on the Buckskin Horse," so I was able to use different characters for all of them!

Day 24: Which character is the warmest?  Coldest?

This one features a mother and one of her many daughters. 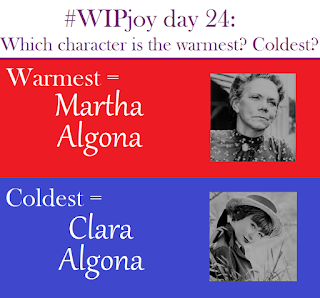 Day 25: Which character is the most religious?  The least?

I suppose technically the minister might be the most religious guy in town, but I never gave him a name or any page time, so I went with a couple of other secondary characters who, while they never outright discuss religion in the book, definitely give this impression through their actions. 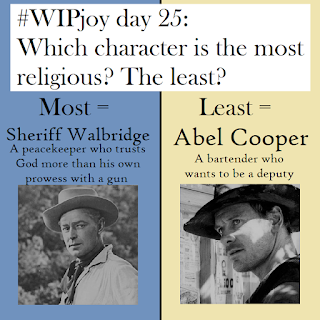 Day 26:  Which character is the most confident?  The least?

Half of this one was a gimme.  My protagonist is possibly too confident, to be honest.  The other half was tougher, but in the end, I went with a character who is quiet and stays in the background a lot because she likes it that way. 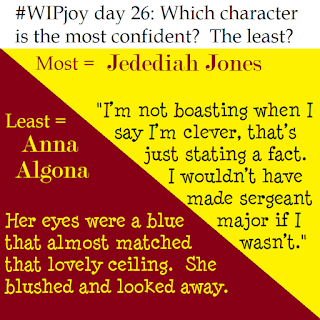 Day 28:  Which of your characters is the most chill?  Least chill?

I love this one because they tie together in fun ways -- one so worried and tightly wound because of what's happening in the story, and the other so laid-back and unperturbed by everything.  I love More Trouble, I really do -- he and his best friend just swaggered into my story right when I was starting to write the first draft, and I kept finding more and more things for them to do just because I enjoyed hanging out with them.  I had to cut them back a little, in the end, I'm afraid. 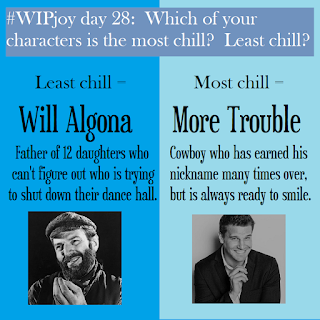 Well, I'm all done with the #WIPjoy in July challenge.  I hope you've had as much fun getting these little sneak peeks into Dancing and Doughnuts as I've had sharing them!  I really can't wait until you can just read the whole book for yourselves.  Soon!  In fact... this week, I'll be announcing the release date AND calling for ARC-reading volunteers, so stay tuned for that :-)
Posted by Hamlette (Rachel) at 6:22 PM

Email ThisBlogThis!Share to TwitterShare to FacebookShare to Pinterest
Labels: "Dancing and Doughnuts", Once Upon a Western, writing