I'm snurching this from Mary Horton at Sunshine and Scribblings.  There's an old joke that writers would much rather write and talk about their writing than actually write.  Sad, but sometimes true.  I'm in the throes of rewrites for "Cloaked" and just... needing to blog a bit instead of fix and change and add and subtract stuff today.  So let's have a bit of fun with this tag, shall we? 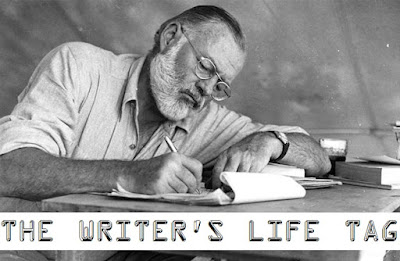 Write-fuel: What do you eat/drink while writing?  Generally, a warm beverage of some sort.  At home, I'll make a mug of tea or hot chocolate because I'm writing after my kids go to bed, and I can't have much caffeine after about 7pm or I won't sleep.  If I'm writing at Starbucks on a Saturday morning, I'll have a hot mocha of some sort, usually.  Though sometimes a cold something, if it's really hot out.  Once in a while I munch something, but that's useless calories because once I'm writing, I'm not noticing what I'm putting in my mouth all that much, so I try not to nibble while I write.

Write-sounds: What do you listen to while writing?  Bobby Darin and movie soundtracks, mostly.  For "Cloaked," I've been listening to the scores for Shane and The Big Country a lot, but also a bunch of Aaron Copland's western compositions too.


Write-vice: What’s your most debilitating distraction?  My email.  Also, Cowboy, if he's around, because he will pester me with affectionate nonsense.

Write-horror: What’s the worst thing that’s ever happened to you while writing?  I have been suddenly and deliberately attacked by spiders on several occasions, and that is terrible because I have to stop writing to hunt them down and kill them or else I will not be able to concentrate for fear that they are going to renew their offensive.

Write-joy: What’s the best thing that’s ever happened to you while writing, or how do you celebrate small victories?  As I don't know if I can choose a best thing, I will answer the second half.  I celebrate small victories by rejoicing with my best friend over hitting a word count goal or figuring out a plot problem or whatever.  Sometimes I also eat something chocolatey.  When I finish a draft of a major project, I sometimes buy myself a little something, like a book or a DVD or a coffee drink of epic proportions.

Write-crew: Who do you communicate with or not communicate with while writing?  My best friend is also my writing mentor.  We often write "together" via instant-messenger, by which I mean that we will chat for a few minutes while we each brew tea or hot chocolate and choose the music we're going to listen to, discuss story stuff a bit, and then drift off into our respective imaginary worlds.  We'll pop back now and then to say something or other, and then at the end of our stints, discuss how things went, share what we wrote, etc.  We freely share works-in-progress to encourage each other, help each other get through tough spots, brainstorm solutions to problems, etc.

Write-secret: What’s your writing secret to success or hidden flaw?  My secret to success is probably my stubborn desire to finish things.  I hate leaving a story unfinished.  I've done it, and it bugs me.  That's also my hidden flaw -- sometimes I'm too stubborn to give up on a story that isn't worth my time.

Write-spiration: What always makes you productive?  Nothing.  Nothing always makes me productive.  There are times when I don't write for days.  Or weeks.  And there are times when I sit down to write and spend ninety minutes writing 600 words.  Other times, I write 2,000 words in two hours.  Both of those happened this week.  However, the thing that generally helps me be productive is knowing what happens in the scene I'll be working on before I sit down to write.  If I don't know where it's headed, I waste valuable writing time on thinking and imagining my way through the scene, and I can do that while I'm folding laundry or brushing my teeth, so I should not be leaving it until writing time.

Sometimes, of course, I think I know where a scene is going, and then it doesn't.  Which is what happened the other evening, when my Bad Guy flat-out refused to talk about what I expected him to.  In fact, he wouldn't say anything at all for about twenty minutes, just leaned tantalizingly on a fence and smirked at me.  And then finally said all manner of things I wasn't expecting, didn't really like, and later realized perfectly set up two things later in the story.  Heh.


Write-peeve: What’s one thing writers do (or you do) that’s annoying?  Honestly, I basically never read those blog posts where people interview their characters or share scenes of their WIPs.  They make me shake my head and say, "Why?"  I don't mind chattering endlessly about the process of writing, sharing the giddy joy and the bitter pitfalls, but the things you're writing don't need to be shared with the world willy-nilly until you are finished with them.  Share them with one or two close writing friends, yes, absolutely.  I've already said that I share nearly every sliver of fiction I write with one particular person.  I often also seek feedback from a few other trusted people.  But I don't wave my half-crafted creative shreds around to attract attention, and I don't feel any need to watch others do so.

Write-words: Share one sentence paragraph from a project, past or present.

He was too late to save his men, but he could still take down the monster that had destroyed them. And if he died in the process, so be it. He had failed to do the one thing he was supposed to do: keep his men alive. That knowledge filled him with despair. Despair and rage.

(from "The Better Part of Valor," still one of the best things I've written.)

I'm not tagging anyone, mostly because I wasn't tagged with this myself.  But if you're a writer and want to fill this out, have at it!
Posted by Hamlette (Rachel) at 1:28 PM