Yes, I went to see this after all.  I'm happy to report that my misgivings were for naught, my whinings were in vain.  Gaston as portrayed by Luke Evans was not a boorish, ridiculous joke. 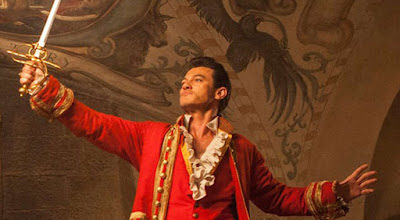 I have only seen the animated Beauty and the Beast (1991) all the way through twice.  The first time was in college, and the second was a couple of years ago when a friend loaned me her copy because it is her favorite movie of all time.  I just have never liked it all that well -- and the fact that so many people expect me to like it has irked me for a long time.  Belle loves books.  I love books.  I must be just like Belle, right?  I must love Belle!  She must be my favorite Disney princess, right?

Wrong.  And I never quite knew why Belle and I didn't click.  Today, I think I figured it out, though!  It has to do with how she spends so much of the first part of the movie insisting "there must be so much more than this provincial life."  She hates living in a small town where everyone greets her in a friendly way.  (How dare they?!)  She looks down her nose at everyone who lives there.  She laughs up her sleeve at them because they're different from her, then gets all insulted when they don't like her because she's different from them.  Like the Beast, she needs to quit assuming she's better than everyone around her and stop judging people based on their appearances.  Sure, sure, the villagers are close-minded and don't like it when girls learn to read.  But it feels like Belle has spent the whole time she's lived here feeling -- even saying -- she's better than everyone around her, and that's not going to make you any friends.  That's not a kind way to live your life. 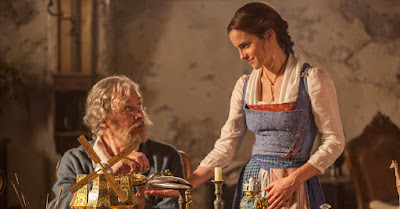 Belle, in my opinion, is not particularly nice in the beginning of this movie or the animated version.  In her own way, she's just as self-absorbed and conceited as Gaston.

Also, I happen to like small towns and open countryside.  I was ever so much happier living in a small town than I was in the two big cities I've spent too many years in.  When we bought a house, we found one with trees and a back yard and the illusion of not being in a city because I can breathe easier here.  So nope, I don't have a ton in common with Belle, folks.  EDIT:  I don't mean for this to sound like I dislike Belle!  As she grows and changes, I like her better and better.  I really enjoy how her character arc mirrors the Beast's.

Her dad (Kevin Kline) was really awesome, though.  I would totally be friends with him.  But he was not my favorite character in the film.  The Beast was. 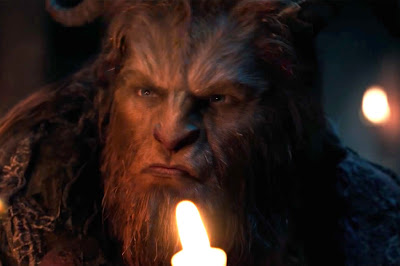 In the animated version, I liked the Beast okay.  Mrs. Potts was probably my favorite character in the animated movie, and I definitely do dig her here (Emma Thompson is high on my list of favorite actresses!).  But in this new movie, the Beast is hands-down my favorite character.  Which makes sense, right?  Sad backstory.  Lonely.  Broody.  The most Byronic hero of any fairy tale I have yet encountered.  How am I not going to like him?

So, yeah, the CGI wasn't always on.  Actually, I thought his facial animation was excellent -- it was the wide shots where his movement didn't always look natural.  Coulda used the Andy Serkis touch, I guess.  But there weren't a ton of wide shots anyway, so oh well, not a big deal for me.

But back to what was a big deal for me, namely an actor I very much admire playing a character I very much despise.  Happily, I am no longer mad at Luke Evans for taking this role because it is sooooooooooooo much better than the animated Gaston.  This Gaston has issues, folks.  He was a captain in a war, and he has come home feeling like he no longer fits in.  He's tense and edgy and dangerous. 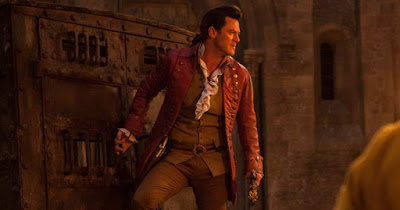 In the animated version, I find Gaston annoying and irritating.  He's not much of either here.  Yes, he pursues Belle against her repeated insistence that she won't marry him.  But he's not so much clueless as relentless.  He knows she doesn't like him, and he doesn't particularly care.  He wants her, he gets what he wants, so he's going to get her.  He's still a bully, but a believable and therefore a frightening one.

Years ago, I went from "I like Luke Evans as Bard in the Hobbit movies" to "I Need More Luke Evans Right Now" when I discovered he could sing, and sing well.  And what really convinced me I needed to go see this after all was Luke's wonderful voice.  I went to Barnes & Noble all by myself (a rare treat) right after the store opened one morning, when it was so quiet inside, I could hear the music they had playing.  Which happened to be the soundtrack to this.  And every time I knew Gaston might be singing, I'd drift toward a speaker and stand under it, enjoying Luke's voice.  By the end of the soundtrack, I'd decided to go see this after all.  And I'm glad I did.  It was fun.  Not a movie I loved, but one I did enjoy.

Though, interestingly, my favorite song is not one of Luke's, but "Evermore," the Beast's big solo.  Man, that song gets to me!  I also listen to "Be Our Guest" a lot because I just 100% love Ewan McGregor's voice.  His Lumiere was a constant delight, as was Ian McKellen's Cogsworth. 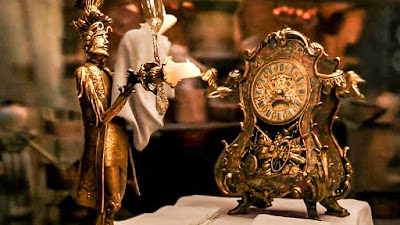 Lots of people have talked about the whole "exclusively gay moment" controversy.  Yeah, it was there, and yeah, I was annoyed.  Just like I was annoyed by the cross-dressing cowboy in Disney's The Lone Ranger (2013).  Unnecessary to the plot and only there to make a statement.  Grr.  If you want to read a really good article about not only the LGBT content, but also about the Christian themes lurking between the story's obvious layers, I recommend this one.

Is this movie family friendly?  Erm, sorta?  Scary, scary wolves.  Angry and violent villagers.  Some vague, campy LGBT content played for laughs.  I'm not taking my kids, mostly because of the scariness level.  They haven't seen the animated version yet, so I've promised I'll let them watch that because I can fast-forward through the wolves here at home.  I'll just have to close my eyes for the Gaston parts and imagine Luke Evans instead.
Posted by Hamlette (Rachel) at 7:53 AM