Look what Olivia tagged me with!  You know my love of a) movies and b) tags, so you know there's no way I'd turn this down :-D  Thanks, Olivia!

I'm going to do two answers for most questions, one for animated and one for live-action, because I can because I love too many Disney movies not to.

#1: Favorite Disney movie of all time?

Animated:  Robin Hood (1973) It's been my favorite animated movie since I was younger than Skippy. 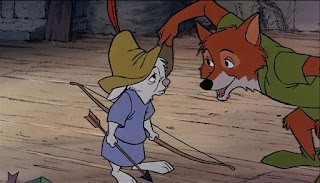 (You see, I love stories because I love the characters, so it's just about a given that my favorite movies are going to involve my favorite characters.)

Animated:  Toy Story 2 (1999), which I saw with my best friend during our college's Thanksgiving break, which I spent at her house.  We went and saw this together at a little theater, and it was such fun.

Live-Action:  Return to Snowy River (1988), which was a devastating disappointment.  It's a sequel to my favorite movie of all time, The Man from Snowy River, but I felt like they kind of removed all the things I liked and added silly things like... jousting?  And a fencing match?  In Australia?  How does that make sense?  Also Brian Dennehy replaced Kirk Douglas as Mr. Harrison, and he's too sinister.  And they gave Jim Craig (Tom Burlinson) curly hair and a different hat.  It was altogether displeasing.  Bad Disney!  Why did you buy the rights to the sequel to my movie and ruin it?  :-(

#4: What Disney item do you collect the most?

Other than DVDs?  I have a ton of Lone Ranger merch.  Mugs, journal, pens, Lego sets, the junior novelization, the soundtrack, an enormous and magnificent book all about making it... 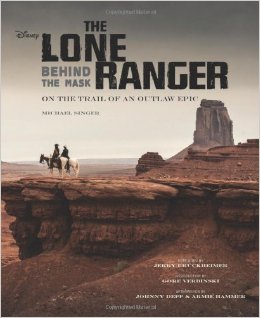 #5: What is your favorite Disney song?

#6: Which Disney voice actor would you most like to meet?

Zachary Levi, who voiced Eugene/Flynn Rider in Tangled (2010).  First of all, Zachary Levi played Fandral in Thor:  The Dark World (2013), so if I met him, he might be somewhere near, say, the set for Thor:  Ragnarok, which means... Chris Hemsworth might be around. 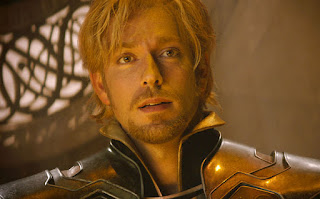 Also, I really love Eugene, so hey, that on its own would make it fun.  But then, while searching for a photo to include with this post, I discovered this: 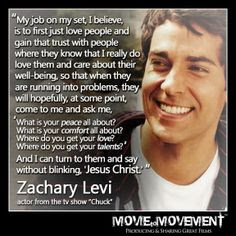 #7: Favorite Disney movie that is not a classic?

Live-Action:  The Three Musketeers (1993), just to not say The Lone Ranger again.  It's completely delicious and so funny.  Just a good romp, really!  Plus... Chris O'Donnell.  Mmm mmm mmm. 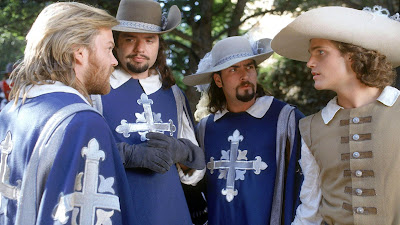 Truth is, The Little Mermaid is one of my least favorite Disney movies.  So... I don't really have a favorite?  Is Sebastian the crabby lobster?  He was funny.

#9: Saddest moment in a Disney movie?

Animated:  The song "When Somebody Loved Me" in Toy Story 2.  It's so sad, I tend to fast-forward through that part.  Growing up is my least favorite thing ever.  I hate it more than spiders and potatoes.

Live-Action:  Ella learning of her father's death in Cinderella (2015).  She was at least a little prepared for her mother's death, but her father's was a total shock, and wow, I cried a lot there.  Can't find any photos of it online, though, so here's one of her and her father when they're happy. 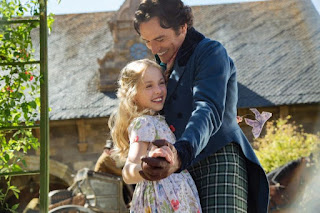 #10: Which Disney princess has the best sidekicks?

Live-Action:  Ella in Cinderella -- love those mice!  Have I ever mentioned that my three kids insist they are mice?

Bonus question: Of the lesser known Disney movies, what one would you recommend?

Animated:  The Aristocats (1970) is a sweet movie, kind of the cat-person answer to 101 Dalmations (1961), I suppose.  I prefer the latter, but the former is not as scary, and the scat-cats are super fun.

Live-Action:  The Light in the Forest (1958) is a really cool look at frontier life, and the struggles of a white boy who was raised by Indians, then reclaimed by his white family.  Lovely performance from James MacArthur in particular.

I tag... DKoren.  And anyone else who loves Disney and wants to play!
Posted by Hamlette (Rachel) at 8:01 PM