I have wanted to see this movie for about fifteen years, ever since I became fond of Richard Todd and learned that he'd been nominated for an Oscar for this.  But it never crossed my path until now.

Three things about this movie surprised me.

First, I was really surprised that this is not a love story!  Everything I'd ever read about it pointed toward this being a love-triangle movie, with Richard Todd and Ronald Reagan vying for Patricia Neal's heart.  Not so.  Oh, there's a bit of subtext here and there that makes it clear that Yank (Reagan) has a thing for Sister Parker (Neal).  And Lachie (Todd) does propose to her.  But that's not the actual point of the story.

Second, I was surprised by how much I liked Ronald Reagan!  I've only seen him in a couple other things, and he was just kind of there, completely adequate, but not very interesting.  But he's really sweet in this, and has a couple of nice scenes that got me all sympathetic with him.  Saying one thing and his face showing the opposite, that sort of thing.

Third, I was surprised by how caught up Cowboy got in the last part of the movie.  He'd been installing a new printer and changing our car's wiper blades while I watched this, so he really wasn't paying attention to the beginning, and I think he missed the bit at the beginning where the audience and most of the characters found out what was going on with Lachie.  So at the end, Cowboy got the same shock as Lachie when they made the second reveal (more on that in a minute), and instead of going upstairs to take a shower, he sat down and watched the last twenty minutes, which is pretty rare.

So anyway, The Hasty Heart is set in an Army hospital in Burma in 1945, at the tail end of  WWII.  Sister Margaret Parker runs a convalescent ward there, which is peopled by Yank (Ronald Reagan), Kiwi (Ralph Michael), Tommy (Howard Marion-Crawford), Digger (John Sherman), and a simple black man called Blossom (Orlando Martins).  Other than Blossom, they don't get names, just their nicknames for their home countries.  They're a jolly bunch, good pals that like to kid around a lot.

Enter Cpl. Lachlan "Lachie" MacLachlan (Richard Todd), a Scotsman with the world's hugest chip on his shoulder.  More of a boulder than a chip, really.  He's twenty-four and very grim and angry, convinced the camp's commander hates him and is keeping him here for no good reason.  He caught shrapnel in the back, had a kidney removed, and has since healed nicely.  As far as he can see, there's no reason in the world he shouldn't be going home now that the war is over.

What Lachie doesn't know is that his remaining kidney is failing, and he only has a few weeks to live.  He's moved to Sister Parker's ward because the guys there are so friendly, his last few weeks can be full of joy and happiness.  Everyone in the movie except him knows about his failing kidney pretty well from the outset, so I'm not spoiling you here, honest.

Lachie hates the world.  He's a foundling, no family anywhere, no friends, no desire for friends (or so he tells himself).  The men try to make nice, but he rebuffs them again and again.

But this wouldn't be much of a movie if it was just about him being a grouch, so you know that eventually, his hard shell cracks, and he makes friends.  He falls in love with Sister Parker too, for good measure.

But then he learns the truth, and...  and I hope you see this, so I'm NOT giving away the ending.  It's easy to see why Todd was nominated for an Oscar for this!  My goodness, it's a tour-de-force of emotional upheaval, and he pulls it off splendidly.  Even when he's furious with the whole world, he just so clearly needs a hug that you can't get disgusted with him.  I've liked Richard Todd ever since I saw him in The Story of Robin Hood and His Merrie Men (1952) and D-DAY: The Sixth of June (1956).  He pulls off sweet and feisty really well.  Oh, and did I mention he has this marvelous Scottish brogue in this?  Thick and proud and very nicely done indeed.  Todd played the role on Broadway before the movie, which I'm sure helped him turn in such a nuanced, believable portrayal.

My only quibble with this movie is that Sister Parker is a nurse, but is called "sister," but kisses one of the soldiers, so is she a nun behaving out of character, or is she just called "sister" as an honorific of some sort?  Makes no sense, but it's not a major point at all and doesn't detract from my enjoyment of this movie.

The costumes were about what you'd expect from a WWII movie, lots of uniforms.  Lachie wears a full Scottish Highlander getup for a little bit, which is really spiffy, but can you believe I can't find a single picture of it?  So I experimented with Windows' "Snipping Tool" and took this: 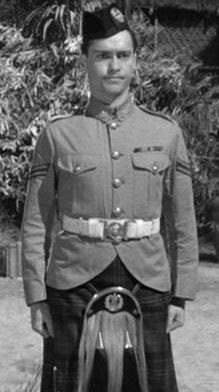 In absence of a good screencap program, this'll do for now, I guess.

Anyway, is this a family-friendly movie?  Absolutely!  There are a couple of explosions in a war setting at the beginning, but no blood or gore, and there's a chaste kiss or two, and a running joke about whether or not you're supposed to wear underwear under a kilt, but it'sj ust harmless, silly fun, not vulgar.  I would let my kids watch this, and they're only 1, 3, and 5.
Posted by Hamlette (Rachel) at 7:55 AM