Although Persuasion is my favorite Austen novel, I'd never seen a movie version of it.  So when I found a used copy on Amazon, I snapped it up.  My mom and I watched it over the last couple of nights, and I have to say that I have mixed feelings about it.

On the one hand, I think the screenwriter should be beaten about the head with hardcover copies of the novel.  Unless you are familiar with the story, you are going to be lost the first time you watch this.  Not optimal!  My mom has never read Persuasion (travesty, I know), and by the time the movie was half over, she was still unclear as to just what had transpired previously between Anne Elliot and Captain Wentworth!  Not only that, but they really made it difficult to understand that there were two Wentworth brothers, mentioning it just once in almost an aside until the news of the Wentworth marriage arrived.

But mostly, I reeeeeeeally wish they'd used some sort of voice-over narration for this movie, because Anne is a quiet character with a lot going on inside her head.  Her non-wordiness is part of why I love her, but without enough spoken dialog to convey her depths, poor Amanda Root was forced to do a lot of looking wide-eyed and thoughtful in order to get the viewers to see that she was anything other than boring.  And honestly, next to the vivacious, cheerful Misses Musgrove, she looked positively dull sometimes. 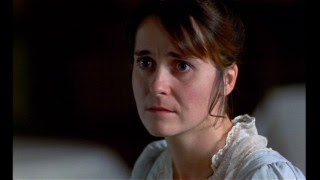 When she smiled, though, you could see why Wentworth had fallen in love with her eight years previously.  Then she sparkled and was quite charming. 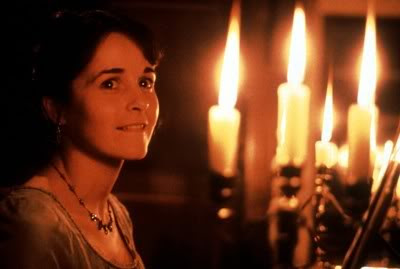 However, I forgive the movie itself for those faults because of one very important factor:  Ciaran Hinds as Captain Frederick Wentworth.

(And also because they accurately had Admiral Croft wearing his hat athwartships, but the younger captains were wearing theirs fore-and-aft, a style change that happened right about then.  Kudos to the wardrobe department!)

But back to Ciaran Hinds (whose name I have, all these years, mispronounced as "char-an" when it's actually "kier-an."  I do apologize!)  He's one of those prolific, reliable actors who pop up all over the place -- I just spotted him in "The Cardboard Box" a couple weeks ago.  I mostly remembered him from The Sum of All Fears and Amazing Grace, but I know I've seen him in probably close to a dozen things.  However, I've never seen him really play a romantic lead before, and I went into this going, "Really?  Ciaran Hinds as Wentworth?  I can't see it."  Because my personal image of Wentworth is of someone tall, broad-shouldered, athletically trim, with brown hair parted on the side, and a lean and handsome face.  A very specific image, I do admit, but remember this is my favorite Austen novel.  Ciaran's taller than average, but also kind of funny looking.  Thinnish lips, large chin, high forehead. 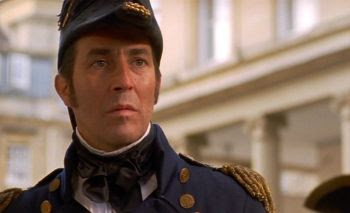 But forget all that.  Wipe it from your mental harddrive this instant.  Because he is a perfect Wentworth.  Proud, but not haughty. Dignified, but with a sense of humor.  And capable of the most wounded expressions, with eyes that are so eloquent, they could have their own lines of dialog. 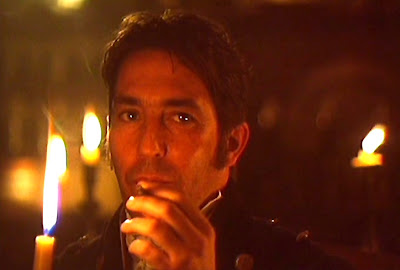 So, not only am I now a fan of this movie despite its defects, I'm thoroughly convinced of Ciaran Hinds' abilities as a romantic lead, and I can't wait to get my hands on a copy of the version of Jane Eyre that has him be Mr. Rochester!

The costumes seemed correct, most of them practical and not splendiferous.  Except the naval uniforms, those were quite lovely.  Everyone else had a lot of earth tones. 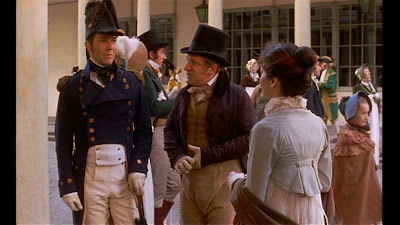 And this movie is very family-friendly and faithful to the novel -- no added scenes to spice things up, etc.  Oh, Wentworth did say d--n a couple of times.  But that's all you need be concerned about.
Posted by Hamlette (Rachel) at 10:27 PM