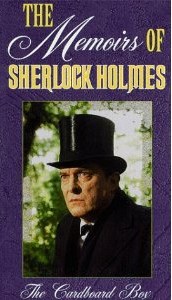 This is the very last episode of the very last Sherlock Holmes series starring Jeremy Brett -- he died a year later of a heart attack.  My husband and I have been watching our way through all of them in order, but I decided to watch this one out of order because Joanna David guest stars, and since I'd just watched her opposite Jeremy Brett in Rebecca, I thought it would be nice to see them play opposite each other again.

I'd seen "The Cardboard Box" before, back when we lived in Wisconsin and watched nearly all the Brett versions thanks to the lovely library system there.  I remembered the basic plot, but not the particulars.  And I was pleasantly surprised to find that Ciaran Hinds also guest-stars in it!  He turned in the sort of nuanced performance you would expect, elevating his character from a simple sailor and wronged husband into someone very sympathetic.

Okay, without giving too much away, here's the plot:  Miss Susan Cushing (Joanna David) consults Sherlock Holmes (Jeremy Brett) about the disappearance of her sister, Mary Browner (Lucy Whybrow).  She thinks Mary has run away with a man their other sister, Sarah Cushing (Deborah Findlay) pushed Mary into having an extramarital affair with.  Holmes says he can do nothing for her.  Later, at Christmas, Susan receives a horrible present:  a cardboard box containing two human ears.  Holmes is consulted by the authorities, and he and Dr. Watson (Edward Hardwicke) solve the mystery, of course.  Ciaran Hinds plays Mary's husband, Jim Browner.

I was sad to see Jeremy Brett looking so old and tired in this because we've been in the middle of the second series, filmed eight years earlier, and he's in much better health there than here.

I honestly don't know that much about period costumes, so I'll just say that the clothes in these Sherlock Holmes series have always matched my idea of Victorian styles.

Is this particular episode family-friendly?  Pretty much -- it involves an extra-marital affair and murder, but neither are discussed or shown in detail.  Not appropriate for small kids, though.
Posted by Hamlette (Rachel) at 7:26 PM