I'm giving away an unopened, brand-new copy of season one of Dr. Quinn, Medicine Woman (17 episodes on 5 dvds)!  Details after my review. 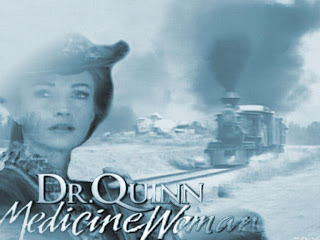 My mom, little brother, and I first started watching Dr. Quinn, Medicine Woman during its third season, in 1996.  We became devoted fans, and watched it every week until it ended in 1998.  (And I'll have you know I was a proud part of those viewer protests about its cancellation.)  It was the first modern TV show I'd ever watched, other than kids shows like Reading Rainbow.  Thanks to reruns on another channel, we did get to see a lot of the older episodes once we were fans, but I never saw the pilot until after I went to college and found it on VHS.  And it's the pilot I'm going to review here, as it's as long as two episodes and basically a little made-for-TV movie, very self-contained.

Michaela Quinn (Jane Seymour) is the youngest daughter of a Boston doctor.  Determined to follow in her father's footsteps, she earns her own medical degree at a woman's college despite resistance from her mother and society in general.  Her father makes her a partner in his medical practice, but when he dies, the patients stop coming.  So Michaela answers an advertisement for a town doctor in the frontier town of Colorado Springs, CO.  When she arrives, she learns that they are expecting a male doctor -- they thought she had signed her application Michael A. Quinn.  Being (to borrow a phrase from Jane Austen) an obstinate, headstrong woman, she stays and tries to convince the townspeople she's a qualified doctor.

At first, only two people take her seriously.  One is Charlotte (Diane Ladd), the local midwife -- she calls Dr. Quinn in to assist with a difficult birth, and Dr. Quinn performs an emergency C-section and saves both mother and baby.  She also helps Dr. Mike (as she comes to be known) learn how to survive and prosper without servants and other trappings of her privileged Boston upbringing.

The other person who takes Dr. Quinn seriously from the first is a man named Sully (Joe Land), a miner whose wife died in childbirth because the town had no doctor.  After his wife died, Sully went to live with the Cheyenne and now serves as an interpreter for them during parleys with the local Cavalry contingent.  He rents Dr. Mike his cabin and helps her out of several scrapes.

The pilot is very episodic, with Dr. Mike having adventure after adventure.  This helps introduce various townspeople, several of whom are not played by the same actors as they would be in the rest of the series.  Dr. Mike attends a few patients, and loses a couple of them because of lack of time or supplies, things she would have had plenty of back in Boston.  One of her patients, while dying, entrusts her three children to Dr. Mike's care, which thrusts her suddenly into the role of mother, one she's woefully unprepared for.

The whole series, but especially this pilot, reminds me of some of Janette Oke's books, though it's not as overtly Christian.  Still, in this episode alone, Dr. Mike leads her new family in prayer at the table and refers to Christmas Eve as the eve of Jesus' birth.  One of the main characters is a preacher, and Christianity is treated respectfully in the series as a whole.  However, the Cherokee religion is also treated respectfully -- this is a Hollywood production, after all, so you get about what you would expect.

The costumes in this series are a joy -- Dr. Quinn wears fancier clothes at first, then tones them down when she realizes that they are a) not practical on the frontier, and b) make all the other women in town envious.  One of her dresses has a V-neckline that plunges a bit far, but manages not to show off any, shall we say, decolletage.  Because this is an older show, and because I am a very silly person and don't have a screencap program, I don't have a lot of pictures for this post, but I hope the ones I did find can give you an idea of what the costumes are like.

Is this series family-friendly?  Mostly.  In this pilot, Dr. Mike treats a saloon girl for a "female problem" (the saloon girl's "activities" are alluded to, but only obliquely) and performs an emergency c-section on a laboring woman who is screaming until Dr. Mike administers some ether.  The c-section shows Dr. Mike's hands being bloody, but nothing else.  This pilot doesn't contain any swear words or other objectionable content, but I do recall that the series as a whole had an occasional swear word, and there are sometimes violent scenes -- this is basically a western, after all.  Later on, in season 4, Dr. Mike gets married, and a few scenes between her and her husband get a leeeeeetle steamy, but not gratuitous.

Now for the GIVEAWAY!!!! 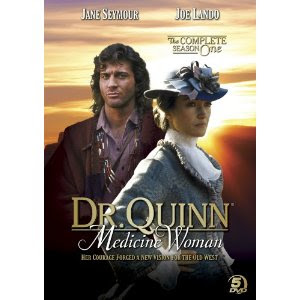 Yes, I am giving away the complete first season of Dr. Quinn, Medicine Woman!  I have the complete series myself, but I acquired an extra copy of season one, and it could be yours for free!  (These are Region One DVDs, just so you know.)  Besides the original 17 episodes, the discs also include am A&E biography of Jane Seymour, an "interactive tour of 19th century Colorado Springs," and other goodies.

Please note:  if you are under the age of 18, PLEASE get your parents' permission to enter this giveaway.  Obviously, I can't enforce such a request, but I'd hate for someone to win this set and then have their parents object for whatever reason (like the fact that you'll have to give me a mailing address).  So just do yourself a favor and be sure it's okay with them.

If you want a second entry, you can mention this giveaway on your own blog, and then comment here again with a link to your blog post about the giveaway.

That's it!  This giveaway runs from February 21 to March 7 -- I will draw a winner on the morning of March 8, and the winner will have 48 hours to send me their mailing address.  If they haven't replied within 48 hours, I'll choose a new winner from the other entries.
PLEASE NOTE:  THIS GIVEAWAY IS NOW CLOSED.
Posted by Hamlette (Rachel) at 5:53 PM