This Isn't Some Fairy Tale: Angel and Buffy

When people find out one of my favorite fictional characters is a vampire, they tend to give me funny looks. And I don’t blame them. When I was a teen, if you’d told me I was going to become a devoted fan of two shows involving vampires, slayers, and other seemingly scary stuff, I’d have given you the same funny look. After all, shows that feature vampires, demons, and magic… those kinds of shows don’t interest a Christian.
Or so I thought. 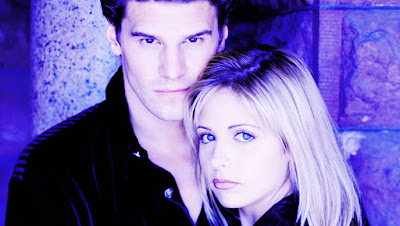 My sophomore year of college, all three of my roommates loved a show I’d vaguely heard of: Buffy the Vampire Slayer. They tried to explain it to me. I wasn’t interested. More than that, I was a bit suspicious. Like I said, the show sure didn’t sound like something a Christian would watch. Why would they go near it?
Then, I caught a cold a couple weeks into our fall semester. I had to skip my Tuesday evening self-defense class. I was too miserable to do homework. And my roommates gathered in front of the TV to watch the season premiere of that dreadful-sounding vampire show, followed by the series premiere of its new spin-off, Angel. Sick and sleepy, I blearily watched it with them. They spent every ad break explaining things to me so I wouldn’t be so confused. By the end of the two hours, I still wasn’t interested, but the guy playing Angel (David Boreanaz) was tall, dark, and oh-so-handsome. And the shows weren’t as scary or weird as I’d thought. I agreed not to get upset if they watched more episodes in my presence.
The next week, they taped both shows and re-watched them around me later on. I admitted the acting and writing were above-par. And then, episode 3 of Angel arrived. It was funnier than the previous installments, so I paid a bit more attention than I had the week before. In it, two other vampires captured Angel and tortured him for information. My heart still pounds when I remember the first time I watched that scene. One bad guy wanted Angel to tell him what he truly wanted more than anything else in this world. He asked over and over, inflicting more pain with each repetition, and after a bunch of flippant answers, Angel finally admitted that what he desired more than anything was… forgiveness.
I think I forgot to breathe. With one word, Angel had my full and complete attention. By the end of that episode, I was beyond hooked. I needed to know what kind of monster would desire forgiveness. The more I delved into the shows, the more Angel’s character arc fascinated me. An idle wastrel in the 1750s, he succumbed to a woman’s temptations and, instead of a few moments of carnal delight, gained a monstrous immortality. She turned him into a blood-sucking fiend who spent a hundred years terrorizing whoever crossed his path. Then some gypsies cursed him by returning the soul he lost between his death and rising. In the show, the soul contains the conscience, and with that restored, Angel was wracked with guilt over the innumerable atrocities he’d committed.
His journey from there astounded me: his search for redemption, his backsliding, his struggle to change his very being and overcome his desires for blood and destruction. They made Angel a compelling picture of the war within each of us for mastery of our own souls. Sadly for Angel and the other characters on both shows, Christianity in their fictional world is reduced to symbols, stripped of Christ and his saving sacrifice. They can only hope they pile up enough good deeds to appease The Powers That Be. Still, at least both shows talk about souls, about hell and heaven being literal places. They declare that evil is a real thing and put a stake in moral relativity. They even state that no human is good, which is so refreshing in today’s humanistic society that prattles on about people’s inner goodness.
Yes, most of the theology in both shows is off. Angel himself has a major works-righteousness theme going on, with him trying to save enough “innocent” people to make up for all the people he killed, tortured, and tormented when he was evil. There’s a lot of magic in both shows, used for good and evil; I am definitely uncomfortable with that. I also don’t agree with the lifestyle choices characters make, but I appreciate the fact that, more than any other shows I’ve seen in recent history, Buffy the Vampire Slayer and Angel demonstrate over and over again that actions have consequences, that doing the wrong thing will lead you down a dark path, and that doing the right thing might not be easy, but you need to do it anyway.
Once upon a time, the idea of vampires filled me with disgust. Now the memory of that disgust causes me to shake my head. I’m not saying everyone should run out and watch these shows, as they contain adult themes and have other content issues that make them inappropriate for some viewers, but I’m glad I gave them a chance, because they’ve taken me on a beautiful journey, one that has helped me appreciate my own faith and Christian freedom all the more. They gave me Angel, a complex, fascinating character I’ll never tire of studying.

(This post originally appeared in the Halloween 2014 issue of Femnista magazine.)
Posted by Hamlette (Rachel) at 8:00 AM