This weekend was the sixtieth anniversary of Combat!'s television premiere!!!  Time to celebrate!!!
I’ve had the same favorite show since I was fourteen: Combat!, a little-known drama from the ‘60s set in France during WWII. For twenty years, I have joyously slogged around muddy Normandy with a squad of grungy American GIs, fighting Nazis and coming to grips with hard truths about the way the world works. 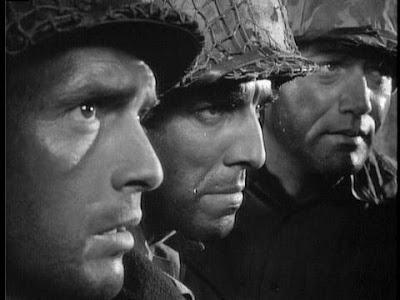 A gritty WWII drama might not be the kind of show you’d expect a fourteen-year-old girl to love, I suppose. Ahh, but I was learning to appreciate good writing and good acting, and Combat! has an ample supply of both of those. By the end of my first episode, I’d fallen in love with the show and one of the main characters, a sergeant named Saunders.
Combat! had two stars: Vic Morrow as Sgt. Saunders and Rick Jason as Lt. Hanley. In an interesting departure from many dramas of the time, Morrow and Jason shared top billing by alternating weeks as to whose title card appeared first and who would have the most screen time.
Saunders leads a squad composed of several regular characters, and most episodes also involve some replacement soldiers who either die off at the first opportunity or are played by a guest star and have a crucial role in the episode’s plot. The regulars included a lithe Cajun (Pierre Jalbert), a wise-cracking city boy (Jack Hogan), a giant farmer (Dick Peabody), a medic (Conlan Carter), and a perpetually naive youngster (Tom Lowell). Together, they did everything from saving babies to rescuing downed pilots to blowing up bridges.
It’s the seven regular characters that set Combat! apart from all other shows, for me. None of them are cardboard cut-outs or caricatures. Throughout the show, they’re allowed to explore various facets of their personalities, grow, and change. Friendships form and dissolve, wounded people get healed, whole people crumble around the edges.
And as for Sgt. Saunders… I could spend an entire article rhapsodizing about him. When I was fourteen, he embodied all the traits I wanted to have myself: courage, strength, determination, and loyalty. Now, he represents a whole different set of virtues I’m seeking: kindness, gentleness, compassion, and willingness to sacrifice himself for others. But before you dismiss him as a boring saint, I should mention he is also stubborn, short-tempered and has a hard time changing his mind about people. Like real people, he’s full of contrasts: patient and demanding, caring and harsh, comforting and deadly. A complex and rewarding character to study, indeed.
Unlike most shows set in WWII, Combat! doesn’t shy away from tough subjects like collateral damage, cowardice, civilians fraternizing with the enemy, and even death camps. While it never touches directly on the Holocaust, since the setting never changes from Normandy, they do manage a story involving Polish prisoners shipped there to build things for the Nazis. Some episodes grapple with the problem of soldiers receiving orders they feel are morally wrong. Others deal with the worth of human life, the definitions of courage and cowardice, and the role of women in a changing world. Even the enemy soldiers are portrayed as real people, not paper targets, and the question of whether enemies can work together for a better good is addressed many times.
As you might expect, a show with storylines and acting of that caliber boasts a massive number of big-name guest stars. Actors asked their agents to try to get them a slot on Combat!—such as Robert Duvall, Lee Marvin, Charles Bronson, James Caan, Leonard Nimoy, and many more. It was a meaty show that serious actors wanted to be a part of; many of them specifically wanted to work with Morrow, who was widely respected as a contemplative, giving actor. Future Oscar-winner Robert Altman directed ten episodes in the first season, most of which are spectacular. Richard Donnor helmed one as well, long before he became famous for directing and producing movies like Superman, and Lethal Weapon.
As for the look of the show, the production crew did a fantastic job trying to make everything look as real as possible. They used actual war footage in many episodes, realistic period weapons and uniforms and vehicles, and as many actual German-speakers to play the “Krauts” as they could. In fact, one of the most realistic things about the show is how the German soldiers speak German and the French speak French, and with only one episode as an exception, there are no subtitles for them—the audience remains as uninformed about what they’re saying as the American characters, though much of the French does get translated by the Cajun soldier.
All five seasons are available on DVD, and the show has a thriving fandom. There are many episodes on YouTube if you want to try a few. I recommend the two-part episode “The Long Way Home” as a good place to start—thanks to a longer story, you get to spend more time getting to know the regulars. If you enjoy deep writing, excellent acting, character-driven drama, or the WWII era, I can’t recommend this show strongly enough.

(This post originally appeared in the September/October 2014 issue of Femnista magazine.)
Posted by Hamlette (Rachel) at 10:07 AM