I've reviewed several episodes of the delightful Granada television productions of Sherlock Holmes cases starring the masterful Jeremy Brett, but I haven't really talked about the music much in any of those reviews.  So I'm here to rectify that today. 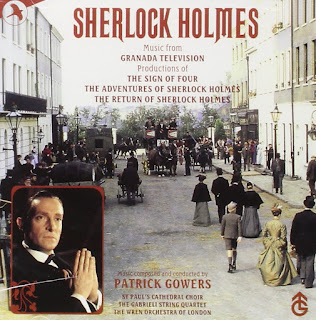 A recording of music used in Sherlock Holmes (1984-1994) was released on CD a decade or so ago.  (Granada did two TV movies and four miniseries, all under different names, over ten years.  They're now all just lumped together and called the Granada Sherlock Holmes.  Because Granada insists upon being DiFfErEnT about everything, I guess?)  ANYWAY, the soundtrack is lots of fun to listen to if you're a fan of the show, but I've pulled out a few tracks that I think you'll enjoy even if you haven't watched it.
By the way, if you're a BBC Sherlock fan, the opener for The Abominable Bride (2016) mimics the opener of the Granada Sherlock Holmes series.  Which I find absolutely endearing.  Anyway!  Here's the main theme for the series, all energetic and mysterious and ready for adventure:
Since we're entering the Christmas season now, I thought it would be fun to share "Mr. Henry Baker's Christmas," which is from the episode "The Blue Carbuncle."  I like how it brings in traditional Christmas carols like "God Rest Ye Merry, Gentlemen" and "Silent Night," but winds them around its own sprightly themes as well.
And I really like "Irene Adler" from "A Scandal in Bohemia" because it's wistful and yearning, but not maudlin.  It's elegant, even, but with a sprinkling of humor, and builds through some very minor parts to a satisfying, quiet conclusion.
The score uses a LOT of violins and other strings, for obvious reasons, since Holmes himself is a violin devotee.  You can listen to the score here on YouTube, and it's not terribly hard to track down a reasonably priced copy on CD either.

I'm contributing this post to the Celebrate Jeremy Brett Month event hosted all through November by Carissa at Musings of an Introvert.  Check out her post here to see the other entries.
Posted by Hamlette (Rachel) at 8:10 AM