When I think of awesome modern western film scores, one name instantly pops into my mind: Bruce Broughton. Sure, he's composed for plenty of non-westerns, like The Blue and the Gray (1982), Young Sherlock Holmes (1985) and Homeward Bound: The Incredible Journey (1993), but he's done such a masterful job scoring westerns like Tombstone (1993), Texas Rising (2015), and Silverado (1985) that I can't help but connect him with them in my mind. (Of course, a lot of this is because I love westerns -- your mileage may vary!) 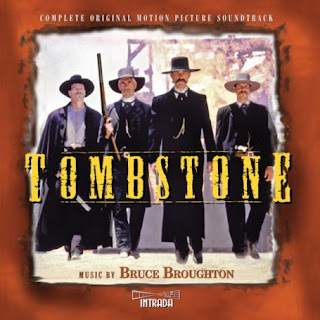 Today, I'm focusing on the soundtrack for Tombstone. I'm going to start things off slow and easy, with "A Family," a tender track that highlights the bond of kinship between Wyatt Earp and his brothers as they reunite in Tombstone, Arizona, looking ahead to a happy and peaceful life with their wives. It's hauntingly sweet, especially since we know their dream of peace will be short-lived.

Much of this soundtrack is minor, sometimes strident, and distinctly modern in flavor. Here's a good example of that:

Although that sort of music usually leaves me edgy, sometimes annoyed, I do like the chaotic flavor of this because it accurately portrays the lawlessness depicted in Tombstone.

This last selection is from the very end of the movie. It begins tentative and hopeful, then transitions into a joyous and frolicsome romp. This is my favorite track from the whole soundtrack, because it has all the major themes in it, and because at 2:30, in comes that chilling, wonderful drumbeat, those triumphant trumpets -- it's a fanfare, a call to arms, and a celebration all at once, and I love it. This plays while the end credits roll, so it's pretty long, and that is A-OK with me. Eventually, it ebbs back into quieter music, then ends with a bold flourish.

(This review originally appeared here at J and J Productions on July 28, 2015.)