That Thing You Do! (1996) came out right when I was starting to pay lots of attention to current movies. Although I didn't get to see it in the theater, I rented it as soon as I could. I was already a huge fan of Apollo 13 (1995), and I loved how Tom Hanks incorporated lots of names from it into this movie, which he wrote, directed, and had a pivotal role in. 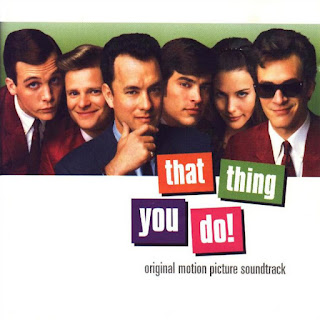 Tom Hanks set this film in 1964, which he said was the last summer of American innocence, before the country began to divide over issues like the war in Vietnam. He even co-wrote many of the songs for it! Here are a few of my favorites.

This is the title song (written by Adam Schlesinger), the one that makes small-town band The Wonders into a short-lived sensation. It's a smile-inducing song, like a sweet popsicle on a hot summer day.

"Dance With Me Tonight" (by Scott Rogness and Rick Elias) is my other favorite number on the soundtrack -- I used to dance around my room to it when I was a teen. I love how well it captures the feel of '60s music, which I spent my teen years listening to instead of what was on modern radio at the time.

The Wonders can do slow and tender too, like in "All My Only Dreams" (by Scott Rogness and Rick Elias).

Not all the music in the movie is '60s-style pop, though. Check out this cheerful jazz number (by Steve Tyrell and Robert F. Mann):

I hope you dug some of this music, and if you have never seen That Thing You Do!, do yourself a favor and give it a whirl. It's sweet and funny, and great for a quick end-of-summer escape.

(This review originally appeared here at J and J Productions on July 22, 2015.)