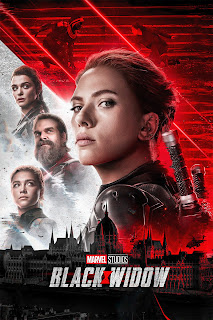 The Marvel Cinematic Universe is at its best when it brings all its shiny machinery to bear on something very, very human: a relationship.  Think of the greatest MCU movies out there, and then notice how they entirely revolve around what happens when two people become friends, become enemies, discover they're related, discover they're not related, and so on.  That's what the MCU understands that the DC franchise seems to miss.  It's not about the explosions or the fight scenes or the mind-blowing CGI effects.  It's about people dealing with other people.  Loving them or hating them or being annoyed by them or wanting to thrash them or wanting to save them.  Relationships are the key.

And that's what made me love Black Widow.  The entire story revolves around the fake family Natasha Romanoff (Scarlett Johansson) briefly had as a child, then lost.  Her little sister Yelena (Florence Pugh), her pseudo mom Melina (Rachel Weisz), and her pseudo dad Alexei (David Harbour) are all ripped from her one by one, but she never lets go of the love she had for them.  Not through all her torture and reprograming in the Red Room that turned her into a superspy.  Not through finding a new family in the Avengers and then losing them too (this takes place between Captain America: Civil War and Avengers: Infinity War).  Not even though she's convinced herself that the love she felt for them was as fake as the family they were pretending to be.

Is it cool that she gets to take down Dreykoff and atone for a few of those red items in her ledger?  Yup.  Were there abundant cool fight scenes?  Yup.  Did stuff blow up about ever five minutes?  Yup.  Did any of that come even close to mattering as much as the deep, rich emotional journey that Natasha goes on here?  Nope.  Not at all.

And I think that's pretty genius, really.  Pull the audience in by promising them a summer blockbuster with lots of bang-bang-shoot-em-up thrills and laughs, and then give them so much more.

Anyway, I've tried not to be spoilery in this.  I know a lot of people have decided this is the movie that will pull them back into the theater for the first time in how ever many months.  I applaud that decision, just like the audience in the theater with me this afternoon applauded at the end of this movie.  It's a great experience (and it is NOT as dorky as the trailer made it appear, though there is a lot of humor, and some of it is dorky or kinda stupid -- but intentionally so).

Is this movie family friendly?  Um, there's quite a bit of cussing, some juvenile humor, and a LOT of non-gory violence.  I wouldn't recommend it for people under like 15.