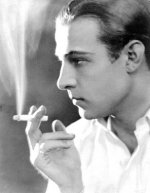 Yesterday would have been Rudy's 126th birthday.  I thought I'd just share a few of my favorite photos of him, even though it's a day late, and links to the films of his I've reviewed.  It's been a while since I reviewed any of his, so maybe I can make time to rewatch one and review it soon.  I'd like to do a proper review for The Sheik sometime, maybe even do a double feature with The Son of the Sheik?  Mmm, I like that idea. 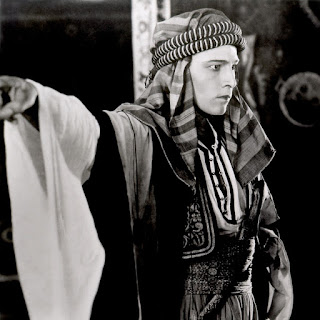 I've been a Valentino fan since early 2004.  He's long been one of my ten favorite actors, in fact.  He projects this amazing blend of playfulness and smolder and vulnerability that's just... entrancing.  It's hard to explain how magnetic he is with just words and pictures -- you have to see him in action.  I found this cute video of Rudy that's kind of summer-themed, him in a bathing suit and romping around on the beach, bits of movies where he swims and so on.  I hadn't seen it before, and it made me grin (even though the song is annoying), so I'm sharing it here:

Anyway, here are the four reviews I've done of Valentino's movies.  Well, The Sheik post is kind of a mini-review, but better than nothing. 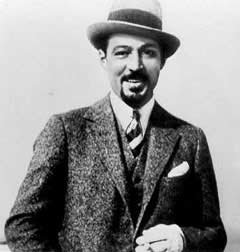 Happy (slightly belated) birthday, sweet Rudy!  Thanks for all the joy you've brought me :-)
Posted by Hamlette (Rachel) at 5:58 PM