Today is Memorial Day here in the USA, which means I'm taking some time to thank God for all the brave people who have laid down their lives in defense of our country and our freedom.  It's the sort of day when I'd like to pull a movie off my shelves that honors and memorializes such sacrifices.  I've put together a list of my ten favorite movies that feature an American soldier paying the ultimate price, just in case you're looking for ideas of something to watch today. 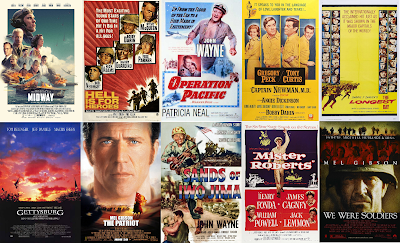 None of these films glorify war.  Instead, they show the terrible price paid by so many men and women to ensure that our freedom is kept safe, and to help free others around the world.

Historically accurate, dazzling, elegant presentation of the early Pacific Theater of Operations during WWII, from the attack on Pearl Harbor on December 7, 1941, through the Battle of Midway June 4-7, 1942.   One of the best movies I have ever seen.

One small American squad (Bobby Darin, Steve McQueen, Fess Parker, James Coburn, Bob Newhart...) holds off a Nazi attack thanks to lots of clever ruses and some spectacular sacrifices. This was written by Robert Pirosh, who also created my beloved Combat!, and this whole movie almost feels like a long episode of the show.

Commander Duke Gifford (John Wayne) leads a submarine crew on a bunch of adventures (most of them based on actual WWII events) and tries to win back his ex-wife (Patricia Neal).  This was my son's favorite movie when he was six.

Darkly tragicomic story of Captain Newman (Gregory Peck), an Army psychiatrist trying to help American soldiers deal with and overcome mental and emotional trauma they've sustained during the war.  Some, he helps.  Some, he can't reach.  Angie Dickinson and Tony Curtis play a nurse and an aid, while the troubled soldiers are played by people like Bobby Darin, Robert Duvall, and Eddie Albert.  Although there are no actual battle scenes, at least one soldier who is healed enough to return to combat is later killed, which lends a lot of gravitas to the story.  Important note: Bobby Darin received an Oscar nod for his role in this.

The story of the D-Day invasion, told from many viewpoints, with one of the most impressive casts ever assembled: John Wayne, Richard Burton, Robert Mitchum, Henry Fonda, Sal Mineo, Richard Todd, and a very young Sean Connery, to name a very few. Until we had kids and lost our big chunks of movie-watching time, Cowboy and I used to watch this together every D-Day.

The story of the battle that tipped the balance of the American Civil War in favor of the Union Army.  It's loaded with wonderful actors like Martin Sheen, Sam Elliott, C. Thomas Howell, and Tom Berenger.  This movie introduced me to one of my personal heroes, Colonel (at the time) Joshua Lawrence Chamberlain (Jeff Daniels).

A widower (Mel Gibson) refuses to take up arms in the American Revolution for a long time, but his son (Heath ledger) fights valiantly for the Patriot cause, and his father eventually realizes he must take his own stand for freedom.  I haven't been able to watch this since we lost Heath Ledger in 2008, but I'm hoping I'll be able to again one day.

We get to know a squad of Marine recruits, led by Sgt. Stryker (John Wayne), as they prepare for the assault on Iwo Jima.  The recruits view Stryker as a cold-blooded bully, but when they actually hit the beach, they understand at last what he was trying to teach them.

Mister Roberts (Henry Fonda) wants to get off the Navy cargo ship where he's assigned and onto a battleship so he can take part in WWII before it's over.  But his cruel captain (James Cagney) refuses to sign his transfer papers.  Other sailors, including Ensign Pulver (Jack Lemmon) and Doc (William Powell), have their own agendas.  This is kind of a dark comedy.  Lemmon won an Oscar for his supporting role.

The story of American forces preparing for and enduring their first major battle in Vietnam.  Mel Gibson, Sam Elliott, Greg Kinnear, and Barry Pepper all turn in unforgettable performances.