I can still remember the first time I saw this movie.  My family was staying in a hotel, back when I was in my early teens, probably on vacation.  The hotel had AMC, which once upon a time actually showed classic American movies, as its name would lead you to expect.  And we sat in that hotel room and watched most of this movie -- I think we missed the first few minutes, but not much at all.  I was probably fourteen, which means my brother was nine, and we got such a kick out of how the different officers would repeat orders into the loudspeaker system that every time anyone did that, we would repeat it too, using pens as our radio headset thingies.  We made sure to watch it all the way to the end so we could find out what it was called, because boy, did we like that movie and want to see it again.

Fast-forward twenty years, to right now.  I've seen Operation Pacific probably twenty times in those twenty years.  It's my second-favorite John Wayne movie.  It's my favorite war movie.  It never fails to make me smile.  And when my six-year-old son asked me, earlier this week, if he could please watch a movie about World War II, I knew exactly which movie we would watch.  There's not a single objectionable word in this movie, there's nothing scary, there are no undertones that I might have to hope he'd just not catch on to.  It's a straightforward, simple, charming story of the crew of the U.S.S. Thunderfish, a submarine captained by Ward Bond, with John Wayne as his second-in-command.  They fight the Japanese, they blow up ships, they solve problems.  A few characters die, in heroic and non-gory ways.  There are a few chaste kisses.  Most of the characters live happily ever after.  The perfect war movie to show to my six-year-old so and four-year-old daughter, who have seen only a couple other live-action movies before (Mary Poppins and The Absent-Minded Professor and parts of The Sound of Music) and are still frightened by things like Marshmallow in Frozen and the Heffalumps and Woozles in The Many Adventures of Winnie-the-Pooh.

But don't think this is a childish movie.  It's got great stuff going on, exploring themes like friendship, envy, pride, and duty.  And the romance between John Wayne and Patricia Neal's characters, who are divorced but still in love, is one of my favorites in all movies.  It's tender, but not mushy. 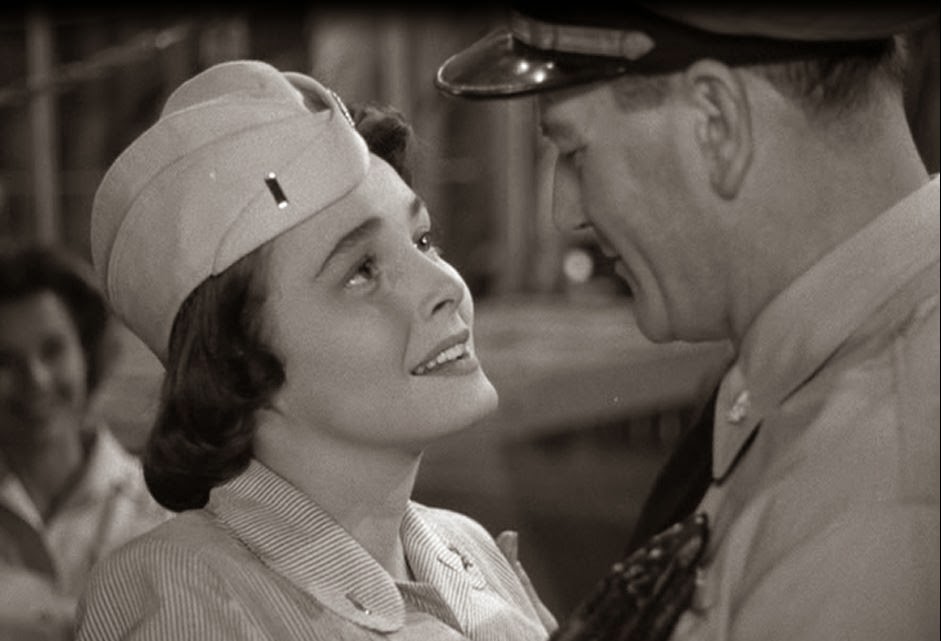 Intriguingly enough, I've recently learned (thank you, internet!) that several of the things that happen in this movie happened in real life during WWII.  I'm not going to say just what so as not to spoil things for anyone who hasn't seen this yet, but you can check Wikipedia's page for more info.

The whole movie looks to be available on YouTube, and I also bought a brand-new copy on Amazon for under $10.

Is this movie family friendly?  Yes, indeedy.
Posted by Hamlette (Rachel) at 7:53 PM