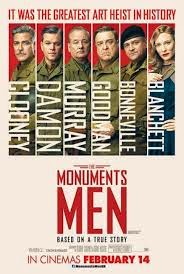 I didn't know they made movies like this anymore!  Seriously, this could have been made in the '60s, back when they were making The Guns of Navaronne and The Dirty Dozen and Where Eagles Dare.  Like those classic WWII movies, Monuments Men is unabashedly heroic.  There's none of the moral uncertainty or post-modernist hand-wringing that plagues many recent war movies.  And I think perhaps that's why this movie was not beloved of the critics.  It does not feel like a modern war movie.  In fact, it's something of an anachronism -- a quiet, gentle movie in many ways, but still a war movie too.  No wonder the critics disliked it -- it's not exactly like every other movie being made right now!

And the characters.  So many nice people, these characters!  I liked them all, definitely want to be friends with most of them :-)  Also, some of them reminded me a lot of characters from Combat!, which definitely added to my enjoyment.  Frank Stokes (George Clooney) had that debonair officer thing going on, just like Lt. Hanley (Rick Jason).  Jean Claude Clermont (Jean Dujardin) was the jaunty, charming, French-speaking outsider, quite like Caje (Pierre Jalbert).  Walter Garfield (John Goodman) was the round guy who likes to cheer others up, rather like Braddock (Shecky Greene).  In fact, the movie as a whole would have worked pretty well as a Combat! episode, a two-parter like "The Long Way Home."  In fact, I was reminded several times of one C! ep in particular, "Heritage," which guest-starred Charles Bronson and involved the squad finding a bunch of stolen artwork hidden in a cave.  I'm guessing that ep was inspired by the events this movie portrays.

Because this is based on a true story, you know, of soldiers trying to rescue artwork from the Nazis.  The movie poses the question of whether or not a "priceless" painting or statue is worth a person's life, and it kind of leaves it up to the viewer to decide, though it's pretty plain what the filmmakers think.

My favorite character was absolutely James Granger, and not just cuz he was played by Matt Damon, though that did factor in a great deal :-)  He's kind, sensible, helpful, nice -- exactly what I like in a character.  (SPOILER!) Granger is a married man, and he gets to know this French woman, Claire (Cate Blanchett), and she makes it plain she'd like to sleep with him without saying it in so many words, and he turns her down, remaining very gentlemanly but firm.  (END SPOILER)

Is this movie family friendly?  More than most modern movies!  There's a fair amount of cussing, on par with a late-60s-or-early-70s war movie, and a woman very obliquely asks a man to sleep with her, but it's all implied, nothing stated in so many words.
Posted by Hamlette (Rachel) at 9:10 AM