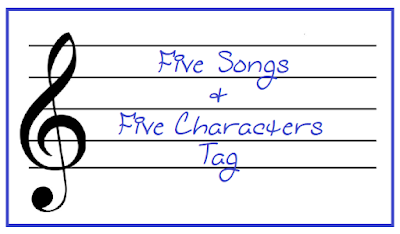 1.  Pick five songs that you relate to fictional characters somehow.  They can be characters from books, movies, shows, myths, etc.  If you're a writer, they can be your own characters.
2.  Share the songs somehow -- embed them in your post or link to them.
3.  Explain why those songs connect to those characters for you.  Is it lyrics?  The melody?  What?
4.  Tag some friends to play too.

Here are my five!  They're in order of how long I've been associating that song with that character.

I first heard this song my sophomore year in college, which is also when I got introduced to the shows Buffy the Vampire Slayer and Angel.  The two quickly became connected in my mind.

To be perfectly honest, this reminds me of Angel's stormy relationship with Buffy more than only Angel himself.  But that's all tied up in who Angel is now, who he used to be, and who he's becoming.  Buffy and Angel both suffered a lot for each other, and at each others' hands.  Finally, Angel realized that he feels like he can't live without Buffy, but she will be better off without him, and so he really can't live at her side either.  He leaves... but he's still waiting for her too, just from a distance.  The waiting is painful, but he's willing to endure it.

I'd known this song for years and years before I started watching Lost.  It's one my husband introduced me to after we got married, and I listened to it a lot while writing my first novel.

It makes me think of Sawyer in a really personal way because when I became a fan of Lost, I got very obsessed with the show, and Sawyer in particular.  I would count the minutes until my two little kids would go to sleep every afternoon so I could watch as much Lost as possible before they woke up.  Whenever I wasn't watching it, I was thinking about it, especially Sawyer, and I would sing this song in my head, about him.  Sawyer liked to project this Southern good-ol'-boy vibe a lot of the time, so the "country man" moniker totally fits him.  And, yeah, I missed him when I wasn't watching Lost.  And sometimes minutes felt like days when I was waiting for my chance to watch the next episode.

(WARNING: THIS SONG HAS THE WORD "h*ll" IN IT REPEATEDLY.)


The first time I went to see Days of Future Past (2014), this song was on the tape (yes, cassette tape) my husband had in the tape deck of the car I drove to the theater.  I listened to it over and over that summer because it instantly reminded me of that movie and how happy I was for Wolverine at the end of it.  The chorus of "Don't need to be alone/No need to be alone" in particular made me think of him in that film, but also his overall journey over the course of the X-men movies, from total loner to the glue that holds a team/family together, to the guy willing to die to protect others.


The first time I heard this song, it gave me images of a very sweet, gentle romance.  It's all about finding the sweetheart you've been waiting for, and it's just a soft, lovely song.

Well, I wrote a book last year called Dancing and Doughnuts about Jedediah Jones, a drifting cowhand just looking for a temporary job.  He ends up finding love with a girl who's not necessarily looking for love either.  And the imagery of magical trees runs all through that book too, because it's a retelling of "The Twelve Dancing Princesses."  As I wrote that book, I listened to so much of Bobby Darin's music that I ended up dedicating the book to his memory, and I realized during revisions that I'd actually written the sweet, gentle romance that this song always makes me imagine.

#5
"Hurt" performed by Johnny Cash
reminds me of Hamlet in Hamlet, Prince of Denmark

I actually did a whole post about this last year, so I won't delve deeply into it here.  Basically, I was on my way home from seeing the Benedict Cumberbatch version of Hamlet at the theater when I listened to this song, which I have loved ever since Johnny Cash's version was released in the early 2000s, and I was struck by how much the lyrics related to Hamlet.  Hamlet spends a lot of time remembering everything and wishing he didn't, trying to figure out if the pain he feels is helpful or something he wants to end, and pondering what he's become.

Time to tag a few friends!  I hereby tap the following bloggers on the shoulder to see if they want to play:

DKoren at Sidewalk Crossings
Eva at Coffee, Classics, and Craziness
Heidi at Along the Brandywine
Katie at I'm Charles Baker Harris (And I Can Read)

Play if you want to!  And hey, if you're reading this and want to do this tag, but I didn't name you, go ahead and consider yourself tagged!
Posted by Hamlette (Rachel) at 10:12 AM