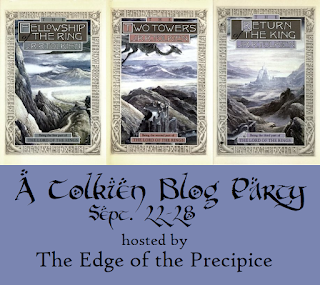 This year, I decided to do something a little different for the Tolkien Blog Party tag.  It's a "would you rather" tag!  I've finally grabbed a minute to answer them myself.  You can join the party yourself in the kick-off post here on my book blog, where you'll also find links to everyone else's posts, my giveaway and games, etc. 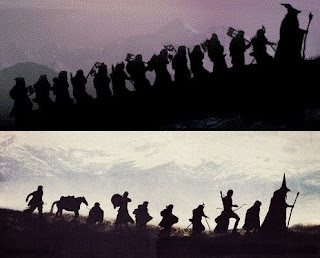 1. ...join Thorin's Company or the Fellowship?

The Fellowship.  I love Bilbo and Gandalf, and I like the dwarves in Thorin's Company (even if Thorin himself exasperates me), but I love every member of the Fellowship and would happily spend as much time with them as is given to me.

I love horses, so I choose Shadowfax.  He's amazing. 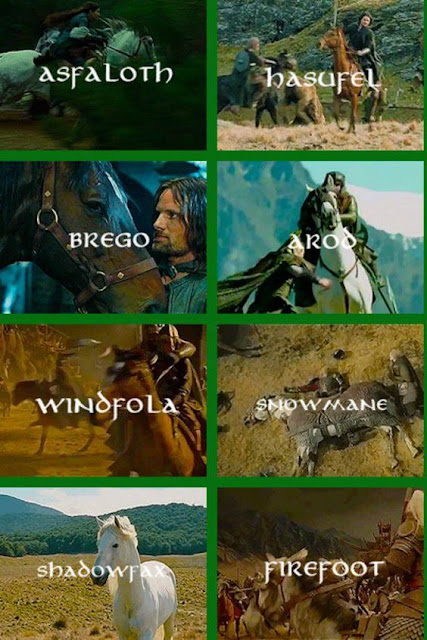 3. ...travel through Moria or Mirkwood?

Moria, all the way.  Sure, there's a Balrog.  And orcs/goblins.  And they have a cave troll.  But there are giant spiders in Mirkwood and I am not having that, thank you very much.

Elvish rope.  Rope is infinitely useful, but chain mail is kind of only useful in a battle.

Smaug.  Saruman has that power to sort of hypnotize you with his voice, so there's no way I'd come out of that a winner.

Besides, where there's Smaug, there's Bard. 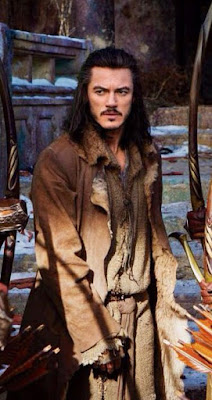 6. ...spend an hour with Grima Wormtongue or Denethor?

There's always at least one question in these tags that I KNOW I'm going to have a terrible time answering, even though I created the questions.  This is that one for this year.  I mean, a Hobbit wedding would be extremely fun, with the eating and dancing and eating and general abundance of cheer.  But... a wedding between Gondor and Rohan, with all those beautiful Rohirrim horses in attendance... wow.

Okay, I'm just going to have to go with loyalty on this one and choose Samwise's because he's my second-favorite LOTR character. 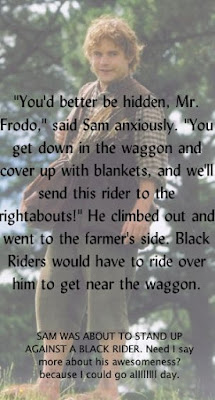 8. ...have to care for the One Ring or the Arkenstone for a day?

The Arkenstone.  Dragon Sickness appears to be pretty easy to cure/avoid, unlike the all-corrupting influence of the One Ring.

Bilbo!  I have a lot in common with Bilbo, and I admire him greatly.

10. ...fight alongside Boromir or Eomer?

I mean, Eomer is awesome and, presumably, if I was fighting beside him, I'd be a Shield Maiden of Rohan, which has been the desire of my heart for many a year now.  But...

Boromir.  Is my beloved.  Always.  Forever.  As he goes, so goes my nation.  I will always choose Boromir. 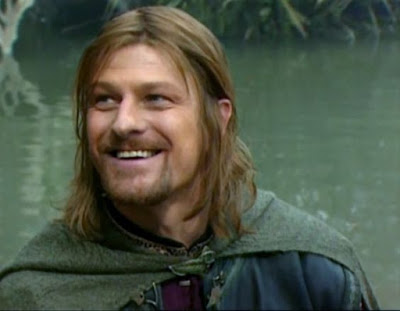 By the way, the giveaway ends tonight, so if you haven't entered that yet, you have a few more hours to do so!
Posted by Hamlette (Rachel) at 6:06 PM