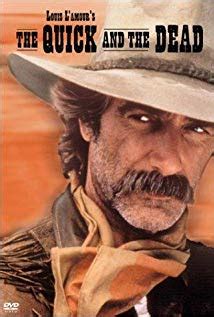 Okay, so I know this is an '80s HBO movie.  I'm cutting it a lot of slack on the strength of that fact.  And honestly, for being made-for-TV in the '80s, the production values are pretty solid.  Nice locations shooting, good cast, okay script.

But man, it really felt like a cheesy '80s take-off of Shane (1953).  Only they took all the things I love about that story and reversed them.  Whyyyyyyyyyyy?

At it's core, it's got the same basic story-line: quiet, inscrutable stranger wearing a fringed buckskin jacket meets a little family composed of husband, wife, and young son, and repeatedly helps them avoid death and destruction.  So far, so similar.

I'm not saying this is a bad movie.  It's not.  It's got some fun twists, and Sam Elliott is always a good time.  If I didn't have both the book and movie of Shane so deeply ingrained in me, I might have a cheerier disposition toward it. I'm going to have to find the book this is based on, cuz it's by Louis L'Amour, and I'm wondering if it feels less like a Shane do-over than the movie does.  We shall see.

Is this movie family friendly?  Um, not exactly?  One of the bad guys says early on that he has first dibs on the woman, because it's been a long time since he's had a woman who smelled good, and he's pretty focused on finding and attacking her, though the word 'rape' never gets mentioned.  (Spoiler alert:  he never gets a chance to touch her.)  There's some kissing, and there's one scene where Kate Capshaw is taking a shower under a waterfall in a very see-through white cami and petticoat or bloomers, I forget which, and Sam Elliott walks in on her and is appreciative of the sight, though he doesn't approach her.  There's some bad language of the cable-tv-in-the-'80s variety, and some western violence.
Posted by Hamlette (Rachel) at 6:43 PM