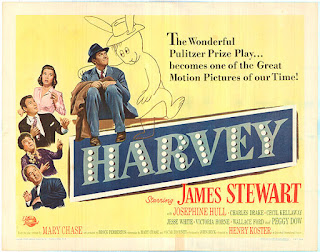 Elwood P. Dowd (James Stewart) has an unusual friend:  a six-foot-tall, invisible rabbit named Harvey.  Only Elwood can see or hear Harvey, though Harvey can see and hear everyone else in the world just fine. 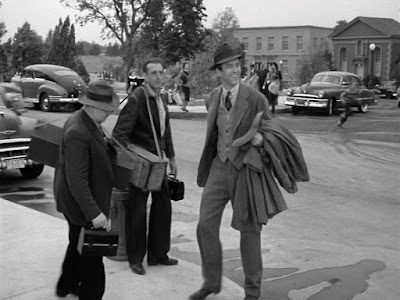 Elwood is a gentle, kindly fellow who is always ready to make a new friend.  And he always introduces his new friends to Harvey very properly.  Whether or not the new friends stick around much longer than that is up to them, not Elwood. 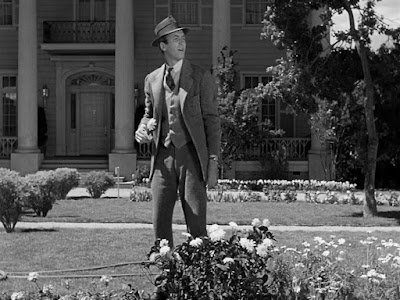 Now, Elwood lives with his widowed sister, Veta Louise (Josephine Hull), and her daughter, Myrtle Mae (Victoria Horne).  Veta Louise is desperately trying to marry her daughter off well, but Elwood's eccentricities scare away many people, including potential suitors for Myrtle Mae.  Elwood's insistence on Harvey's existence is the bane of Veta Louise's life -- they can't even keep maids for long because of it. 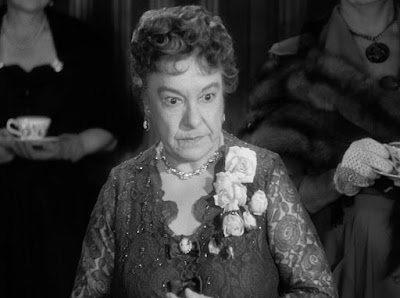 Elwood spends much of his days down at a local bar.  Is this because he enjoys alcohol?  Certainly.  Is this also because the bartender and the other tipplers there talk nicely about Harvey, while everyone else keeps insisting Elwood is being ridiculous?  Probably. 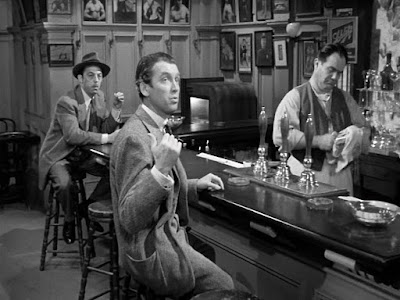 Elwood's odd behavior has convinced Veta Louise that he is insane, and she decides that the only way Myrtle Mae will ever find a good husband -- or any husband -- will be for Elwood to be taken to a sanitarium and "cured." 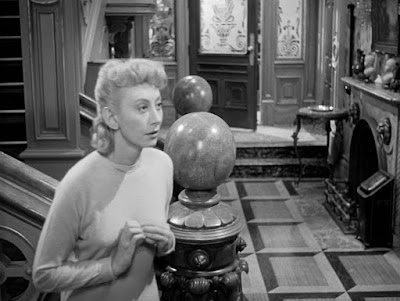 Several comical mix-ups occur at the sanitarium, but eventually they're straightened out, whereupon the movie goes from somewhat silly and whimsical to tender and bittersweet.  Elwood decides that, if him going to the sanitarium will make his sister and niece happy, then he will go, even though he is certain he's perfectly sane, and Harvey is perfectly real.  To please and help them, he even agrees to have an injection that will make him just like everyone else in the world.  He understands that this means he won't see and hear Harvey anymore, but he always wants to make Veta Louise happy and take good care of her, so he agrees.

But then... something very unexpected and lovely and wonderful happens.  I won't spoil exactly what it is, just in case you haven't seen this or the stage play and would like to.  But I absolutely love the ending of this movie. 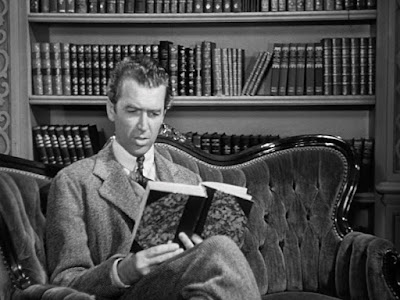 James Stewart sells Elwood's belief in Harvey in a beautiful way.  He's never ridiculous, never winking at the audience saying isn't this character nutty?  His Elwood P. Dowd is very real, very grounded, very sweet, and he makes this movie poignant in so many ways. 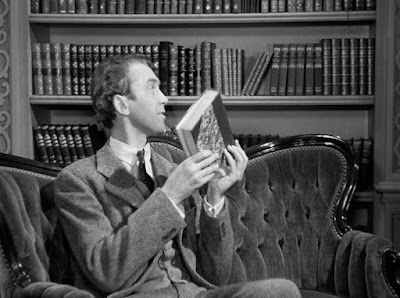 Harvey was originally a stage play, written by Mary Chase.  It won the 1945 Pulitzer Prize for Drama, and deservedly so.  It ran for more than four years on Broadway, and James Stewart played Elwood P. Dowd on stage for part of that run.  He later reprised the role in a West End production in the 1970s.

Is this movie family friendly?  ABSOLUTELY.  It's also a great way to introduce children to the idea of psychiatric disorders and show that people who may behave a little strangely do not need to be scary.  And it teaches that people who view the world a little differently from you should be treated with kindness and understanding. 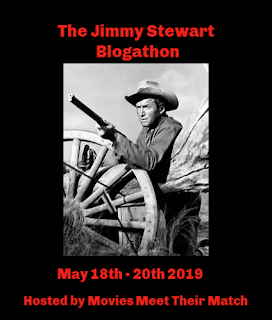 This has been my contribution to the Jimmy Stewart Blogathon hosted by Movies Meet Their Match.  Today would have been James Stewart's 111th birthday!  Happy birthday to an actor who has been dear to my heart for decades :-)

Find out what blogathons I'll be hosting or participating in on my Upcoming Blog Events page!
Posted by Hamlette (Rachel) at 12:15 PM