Eva asked me to come up with some suggestions for people who like the Indiana Jones movies, so here we go! 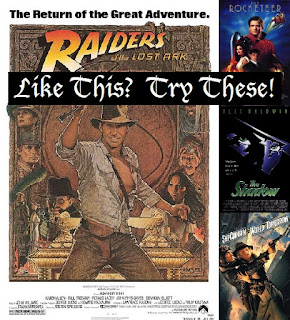 You probably know that the Indiana Jones movies were inspired by the serial adventure stories from the 1930s and '40s, stories told both on screen and in pulp magazines.  If you like their blend of rollicking adventures, historical settings, and a twist of sci-fi or the otherworldly, you might like any of these:

+ The Rocketeer (1991) -- In 1930s Hollywood, a pilot (Billy Campbell) finds a rocket pack and uses it to become a super hero, save the girl he likes (Jennifer Connelly), and defeat some Nazis.  It's based on a graphic novel.  (This one has non-gory violence, some low-cut dresses, suspense, and some mild cussing, as I recall -- I've only seen this twice, and that was several years ago.) 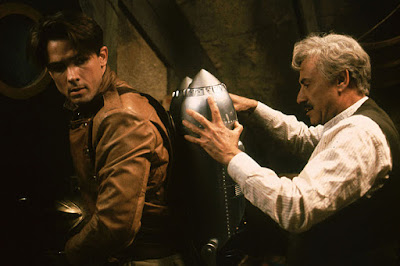 + The Shadow (1994) -- In 1930s New York City, the wealthy, sophisticated man-about-town Lamont Cranston (Alec Baldwin) uses his mystical ability to cloud men's minds to fight evil and rescue the father (Ian McKellen) of his companion, the lovely Margo Lane (Penelope Ann Miller).  It's based on a radio show (one of my favorites) from the 1930s that also spawned a lot of pulp magazine stories.  (This one also has some revealing dresses, actiony violence that's mostly non-graphic, mild profanity, suspense, and some creepy stuff.  Also a shot of a man in bed with multiple women who are asleep.) 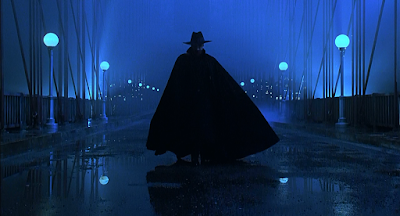 + Sky Captain and the World of Tomorrow (2004) -- In 1930s New York City, a gutsy reporter (Gwyneth Paltrow) teams up with her ex-boyfriend, an adventurous pilot (Jude Law), to stop giant robots, rescue missing scientists, and generally save the world.  No idea what this is based on, sorry.  (This one has implied nudity in a non-sexual context, non-gory violence, a little mild profanity, and suspense.) 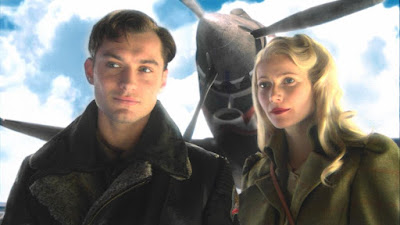 As always, I hope this helps you find some movies you might enjoy.  If you've seen other movies with this same flavor, I'd love to hear about them, because I really dig this style of retro fun.  And as always, let me know if you have any movies you'd like me to base recommendations off :-)
Posted by Hamlette (Rachel) at 5:58 PM