Last fall, I harvested seeds from my heirloom marigolds and nasturtiums.  LOTS of seeds.  This weekend, I've planted what I need for this year, and I have seeds left over.  So I thought I'd see if anyone would like them!  I have about fifteen nasturtium seeds left, and more marigold seeds than you would believe.  So if you'd like some free seeds, let me know by the end of April, and I'll send them to you!  Better than them going to waste, right?  This is totally first-ask, first-serve (and I don't know if anyone will even want them), but I can't imagine I would run out of marigold seeds because I have gazillions.

I probably should not send these seeds out of the country -- I know different countries have different regulations about non-native plants and seeds, so I'm afraid I can only offer these to US residents.

Here's what they looked like.  The nasturtiums are in the left white pot, and not flowering in this photo.  The marigolds are the tall things in the right white pot, with blooms. 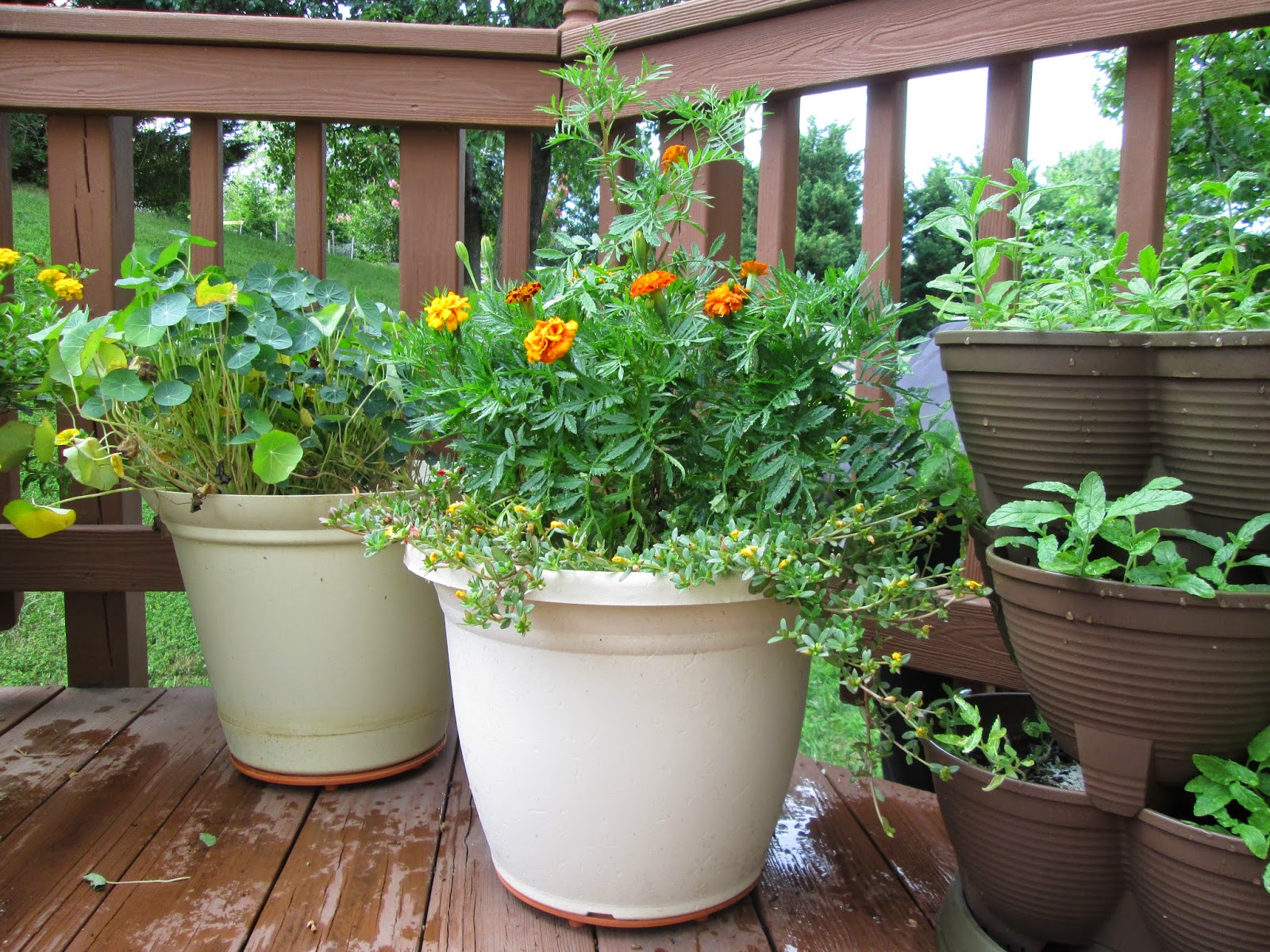 These are "Empress of India" nasturtiums (Tropacolum majus), which are described as having "cascading waves of distinctive, blue-green foliage... with vibrant, vermilion flowers from late spring 'til frost."  Mine came from here, though I bought them at a museum in Iowa, not online.  You can read more about them here.  For me, they produced yellow, orange, and red blossoms and lots and lots of seeds.  I've learned that nasturtiums actually prefer poor soil, and will bloom less if you have good soil, so I like to use them in pots that had something else the year before and have soil that's been a bit depleted. 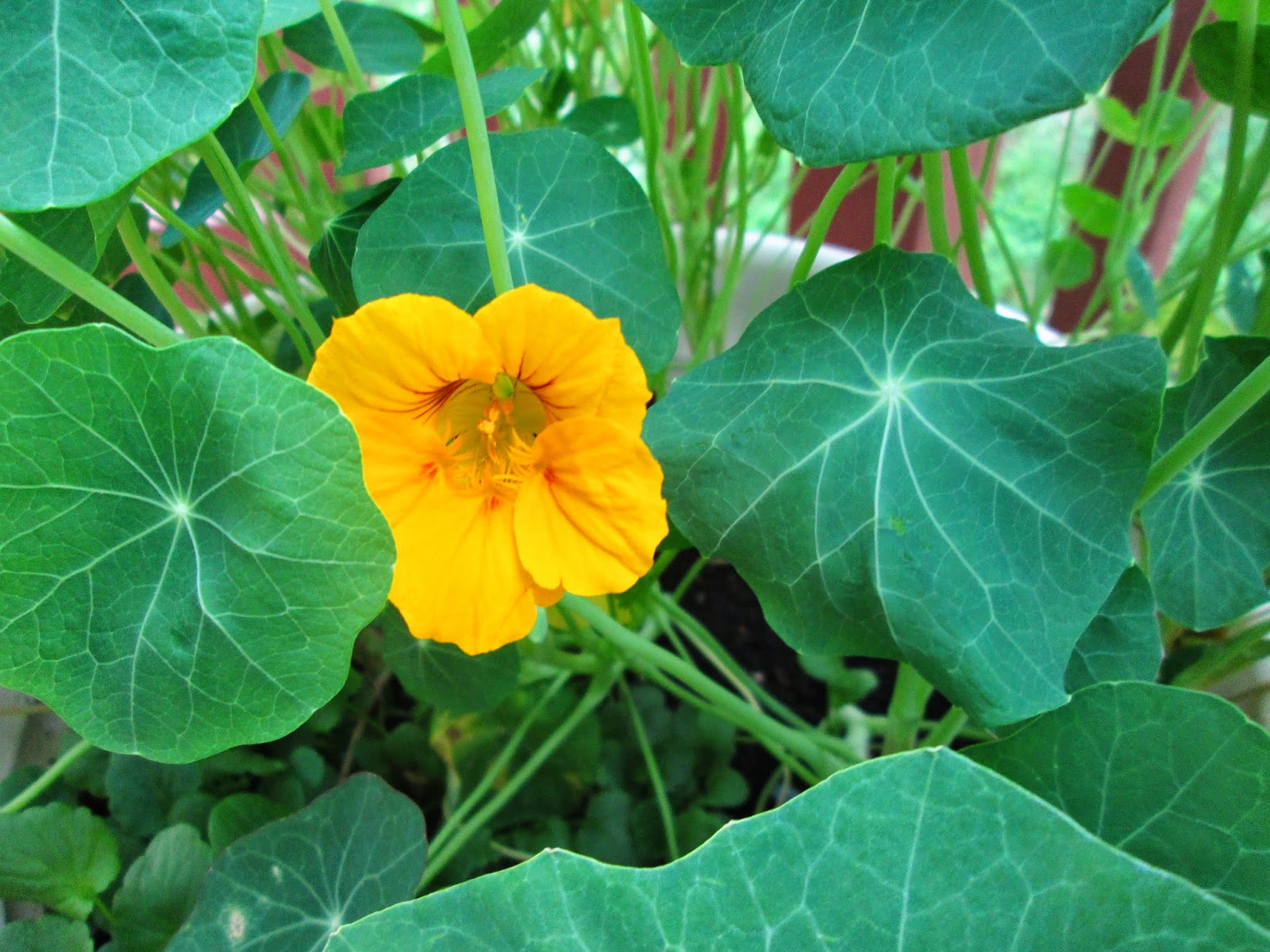 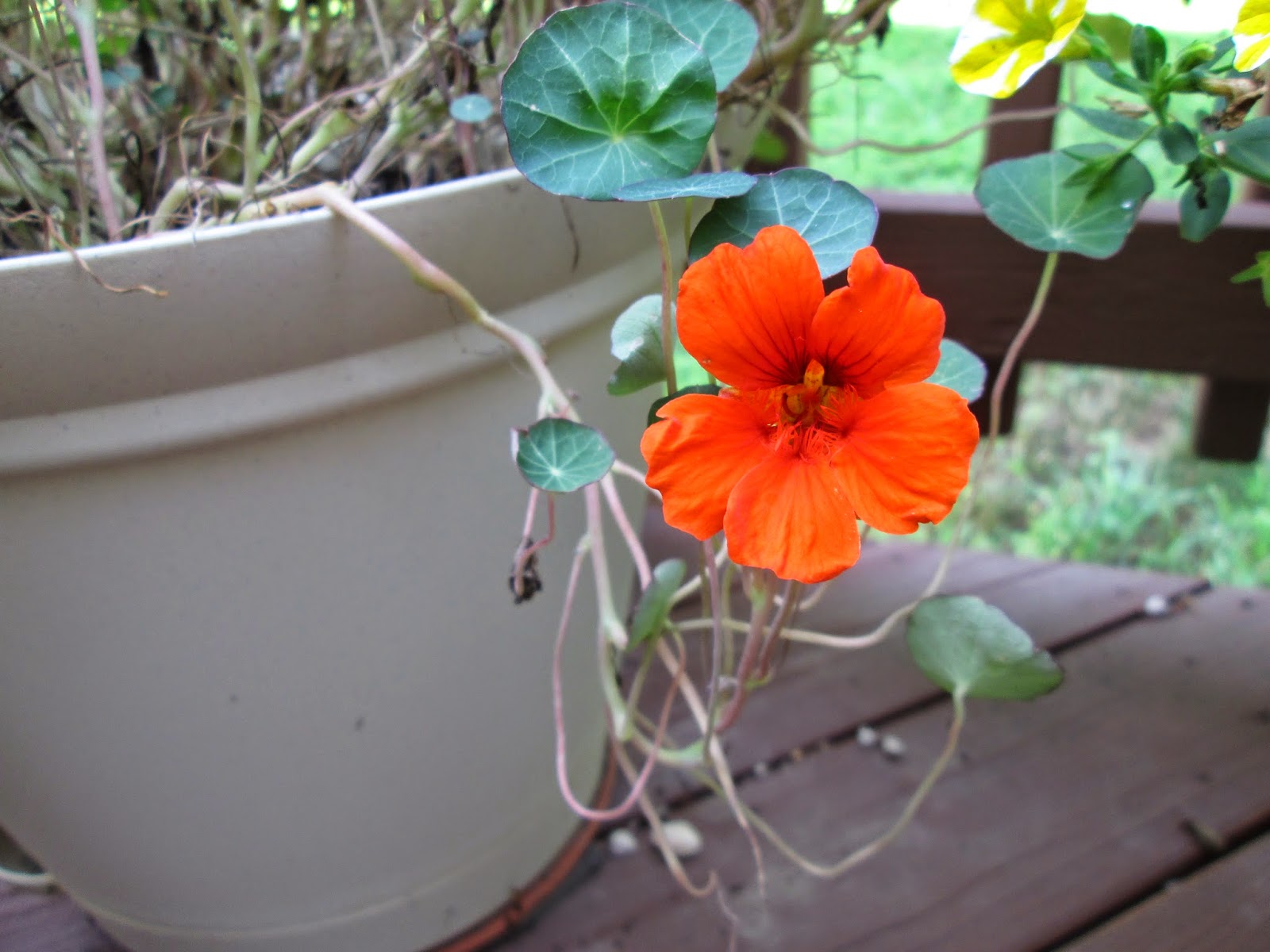 The marigolds are a "French Marigold -- Brocade Mix" (Tagetes patula), which are described as an "early, continuous bloomer bearing 2" bi-colored blossoms of gold and mahogany red."  Supposedly, they repel insects and nematodes.  They also come from here, as I bought them at the same time and place as the nasturtiums.  You can learn more about them here.  For me last year, these produced an amazing abundance of yellow, light orange, and deep orange blooms, and I am planting even more of them this year because they were so vibrant and lovely.  They also got very tall last year -- most of them were around 2 feet tall by the end of the summer, and a couple reached 3 feet! 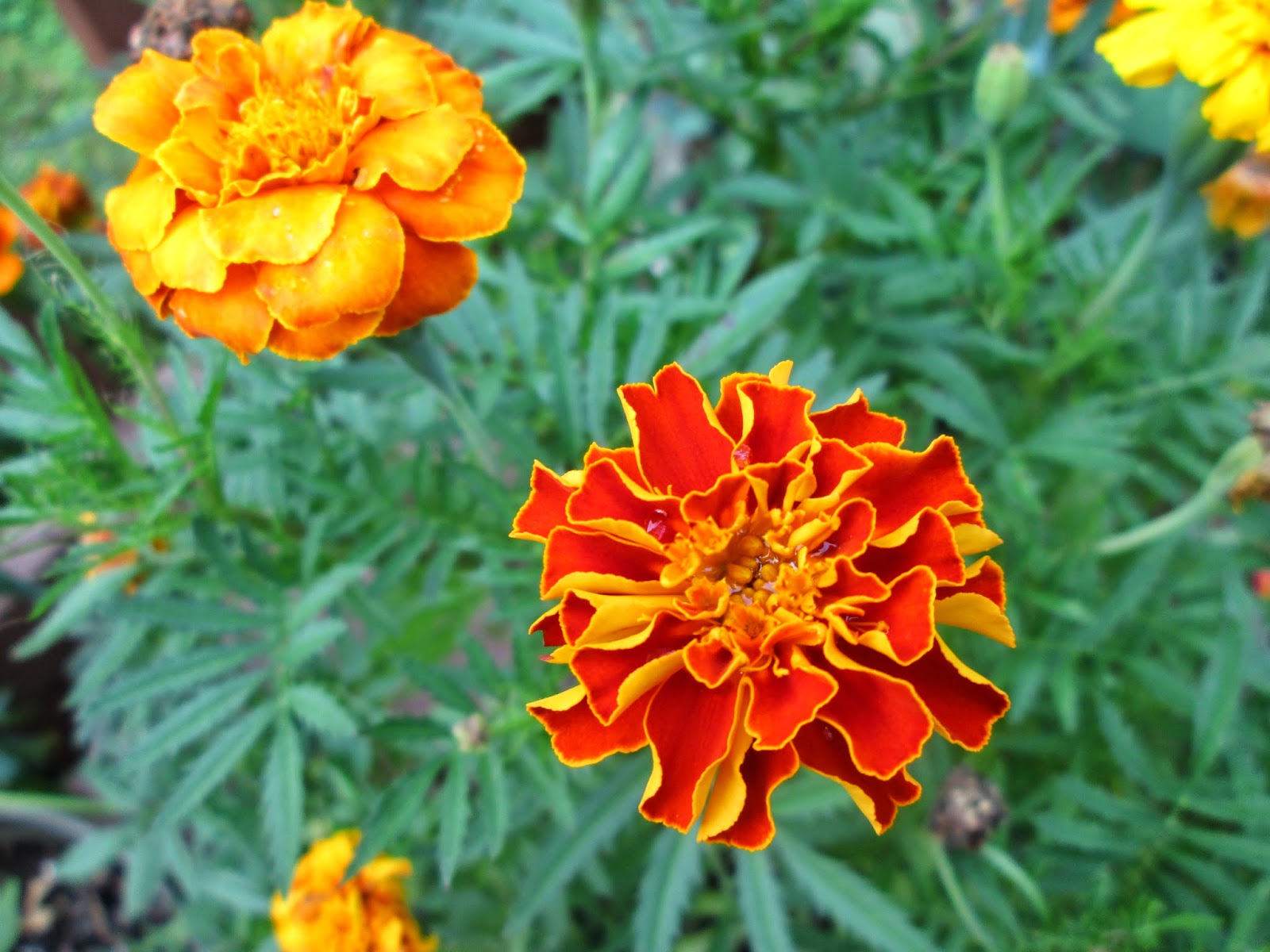 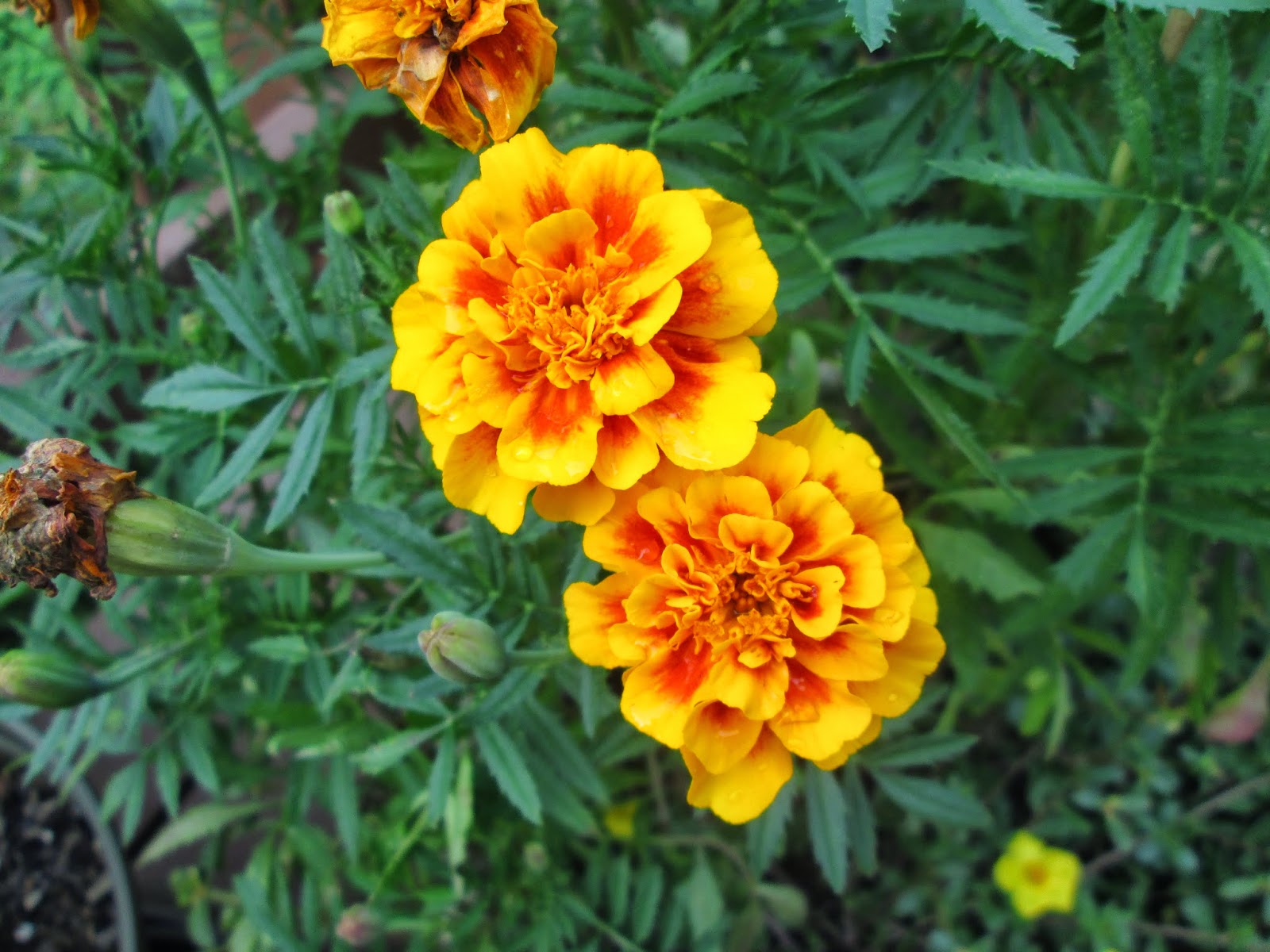 Here in Virginia, I have planted these in containers this weekend, though of course you'd want to check to make sure when to plant them in your own zone.
Posted by Hamlette (Rachel) at 2:50 PM

Email ThisBlogThis!Share to TwitterShare to FacebookShare to Pinterest
Labels: flowers