MEMM Day 18 - "The Hobbit" character you relate to the most

This is something of an anomaly for me.  And not just because, quite unexpectedly, he has become my favorite Middle Earth character, ousting Boromir from that spot.  I never thought that would happen, and it kind of shocked me when it did.  But the real anomaly here is that the character I identify with the most is also my favorite.  That's not usually true.  Almost always, the character I relate to the most is my second-favorite.  Sam in LOTR.  Willow Rosenberg on Buffy the Vampire Slayer.  Victoria Barkley on The Big Valley.  Dr. Watson in pretty much every incarnation of the Sherlock Holmes world.  Kate Wallace on Five Mile Creek.  Dr. Mike on Dr. Quinn, Medicine Woman.  Billy Nelson on Combat! is more like my 3rd-favorite, but I would so be him in that show.  And on and on.  Only rarely is my favorite character also the one I see myself in.

The other two instances I can think of right now where my favorite character is also the one I identify with are hugely important to me:  Wolverine in the X-Men comics and movies, and Lucy in While You Were Sleeping.  Those are the only two I can think of.  And I think that's why Bard shot so quickly to the top of my Middle Earth Favorites list.  Because for me to start out going, "Bard is my favorite Hobbit character" after DOS, and then in TBOTFA identify so strongly with him -- that's potent.

I just looked in my journal, and after my second viewing of TBOTFA, on January 3rd, I wrote:


I definitely love this movie.  And Bard.  I identify very strongly with him, more than any Tolkien character besides Sam.  Possibly more.  I'm not sure.  Very close kinship.

After my third viewing, on January 18th, I wrote:


I realized, after I got home at 12:45am, that I now love Bard the Bowman more than Boromir.  I am shocked.  But it's true -- I love movie-Bard better than any other Tolkien-world character.  Book-Bard is too underdeveloped -- he's just grim and sensible, and happens to be able to understand birds.  But movie-Bard is stalwart and pure-hearted and noble and honorable and upright and brave and selfless and yeah... total love.

So yes, I think it was the realization that I identify with Bard so strongly that really catapulted him past Boromir.  But why do I relate to him so much?

Because everything he does, he does to protect his family.  They are his number-one priority.  Why does he set out to slay Smaug?  Because little Tilda asks him if they're going to die.  Why does he lead the survivors of Laketown to find shelter in Dale?  Because he needs to shelter his children.  Why does he fight so fiercely and valiantly in the ensuing battle?  To protect his children.  In fact, the movie makes this really explicit -- if you'll recall, Alfrid asks Bard why he's doing all these thrilling heroics, and Bard looks at his kids. 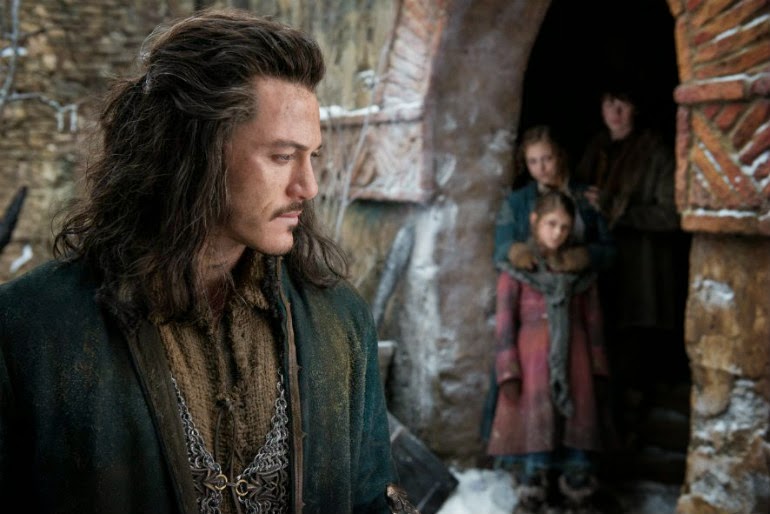 And I soooooooooo identify with that.  My family is also my number one priority.  Protecting my children is a huge part of my life.  Happily, I don't have to battle any orcs or trolls to do so, though I would if I had to.  Instead I have to battle the world around us, my own selfishness, and anyone who would try to influence them in a way I deem wrong.  I also try to protect them from things like falling head-first off the playground equipment or getting run over by cars or touching hot pots and pans or sticking keys into electrical sockets or standing on top of toy trucks to reach something or or or or....  My days are filled with protecting my children.

There are a bunch of other reasons I identify with Bard, like that he's helpful, he tries to convince people not to be stupid, he reluctantly becomes a leader because somebody has to do it, he gives people second chances, he doesn't just go along with what powerful people tell him, and he's really good at keeping secrets.  But it's that unwavering commitment to protecting his family that speaks to me the most.
Posted by Hamlette (Rachel) at 7:51 AM