Good mornin' to ya!  (Try to hear that in Billy Connolly's voice, okay?)  I've decided to try a new series of sorts.  I'm always reading blog posts I want to share with more people, and I run across various other cool things online that I think other people would enjoy, but that I don't have time or inspiration to do a whole blog post on them.  So I'm going to try collecting those all through the month, and share them with you all at once.  What do you think?  Let me know if I should continue this sort of thing!

This Soviet animated version of Winnie-the-Pooh from 1969-1972.  Oh my goodness, these make my kids laugh so hard, even when no one is around to read them the English translation subtitles.  They're much closer to A. A. Milne's original books than the Disney movies (even the classic version, made about the same time, which I love dearly).  Do yourself a favor and try one -- they're great fun.

And here's a video that is completely different.  It's Luke Evans and James Nesbitt singing a Dean Martin song together, live.  I don't exactly love Luke's voice, but I love that he can sing, and the way he sings.

Now, back in February, I stumbled on this video of Luke Evans singing "Delilah," and I emailed DKoren going, "Oh my goodness!  Luke Evans can sing!  And he has that sort of casual 'Oh, this is so easy' thing going on that Dean Martin does!"  And then I found this video of him singing "The First Time Ever I Saw Your Face," and was like, "ACK!  This song!  I've loved this song for decades!"  Swooooon.  Not to mention, it's in X-Men:  Days of Future Past.  Swoon again.  And then I found the above video, which is him dueting with James Nesbitt on an actual Dean Martin song, and I had to write DKoren again going, "Um, you know how I just compared Luke's singing to Dino's?  Whaddaya know...."  So anyway, I've been listening to these three songs a lot over the last 2 months.  What I especially like about this one is that James Nesbitt is the real-life dad of the two girls who play Luke's character Bard's daughters in the Hobbit movies, so yeah, seeing them together in this is awesome.  Not to mention, about 24 seconds in, Luke does this leeeeeeean on his microphone stand that is pretty deadly.  Those 3 songs are also directly responsible for me writing a new short story over the last couple months, so um... yeah, even though they're not something I found in March, I'm including them.

Moving right along, here are some blog posts I ran across in the last month that I found particularly thought-provoking or amusing or just generally share-worthy:

"From Atheist to a Lutheran Pulpit" on The First Premise.

"How to Gossip like the Period Drama Ladies" on Wonderland Creek.

"Why You Should Learn to Stop Worrying and Start Loving the Title Cards" on Silent-ology.

And here is the one thing I found on Pinterest all month that has continually amused me.  (From my Take Me to Middle Earth board.) 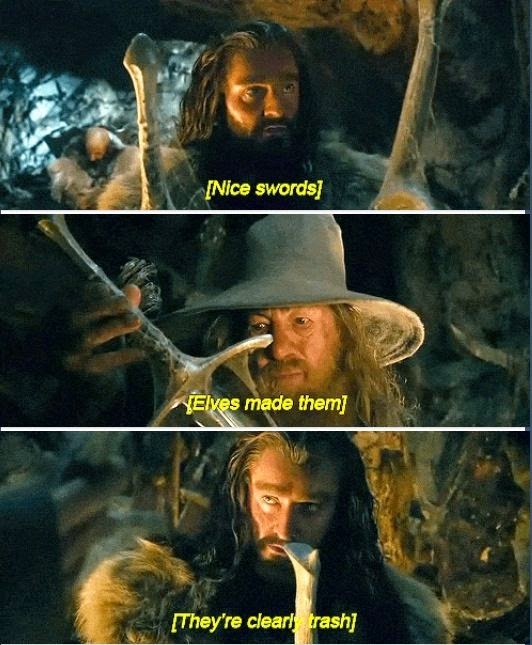 I kind of have been saying, "They're clearly trash" all month as a result.  I can totally hear that line in Richard Armitage's voice, which is why it cracks me up so much.

Happy April!
Posted by Hamlette (Rachel) at 9:19 AM