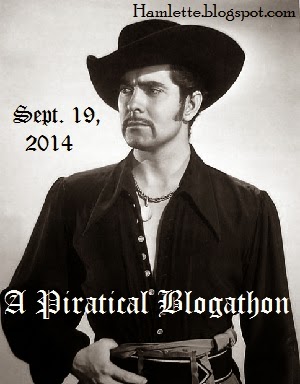 This is my contribution to the very first blogathon I have ever hosted :-)  Click here or on that button to find the list of all the other entries and read those too!

I first saw this a few years ago, before I really had seen Tyrone Power in much of anything.  Oh, I'd seen him in two or three movies, but none of them recently.  This is the movie that made me sit up and go, "Zowie!  I need to see more Tyrone Power movies!"  In fact, most of the time I can't actually remember Tyrone Power's name -- I think of him as "Jamie Boy," his character in this movie.  (Also, I just learned I've been pronouncing "Tyrone" wrong all these years.  At least, according to the trailer for this movie.)

Anyway, on to the pirates!

The Black Swan opens with Captain Jamie Waring (Tyrone Power) and his band of pirates descending on a sleeping Caribbean city and carrying off all the treasure, wine, and women they can hold.  But Captain Waring (called "Jamie Boy" by those who love him) gets captured by the Spanish soldiers, and the governor of Jamaica puts him on the rack and tries to torture him into revealing where notorious pirate Henry Morgan is.  Of course, Jamie Boy just spits insults at him until his pirate crew comes to free him, and they stick the governor on the rack instead.

And that's when Lady Margaret (Maureen O'Hara) sweeps imperiously down the stairs, points a pistol at Jamie Boy, and demands to know where her father is.  Turns out she's the daughter of some British lord they'd just tossed in a dungeon. 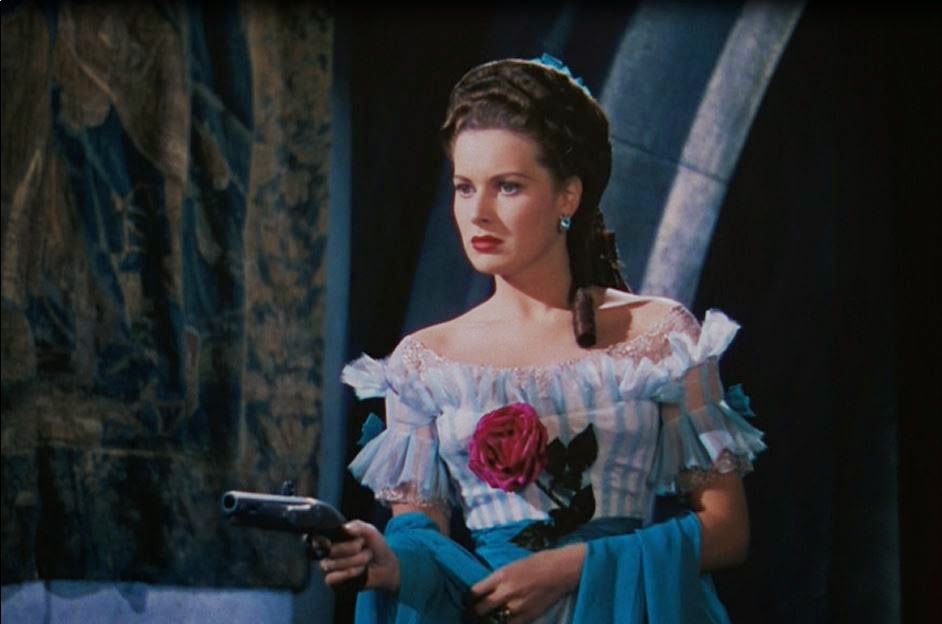 Jamie Boy tells his crew he's claiming her as "captain's share" of the loot, then salutes her with his sword and trades insults with her for a bit. 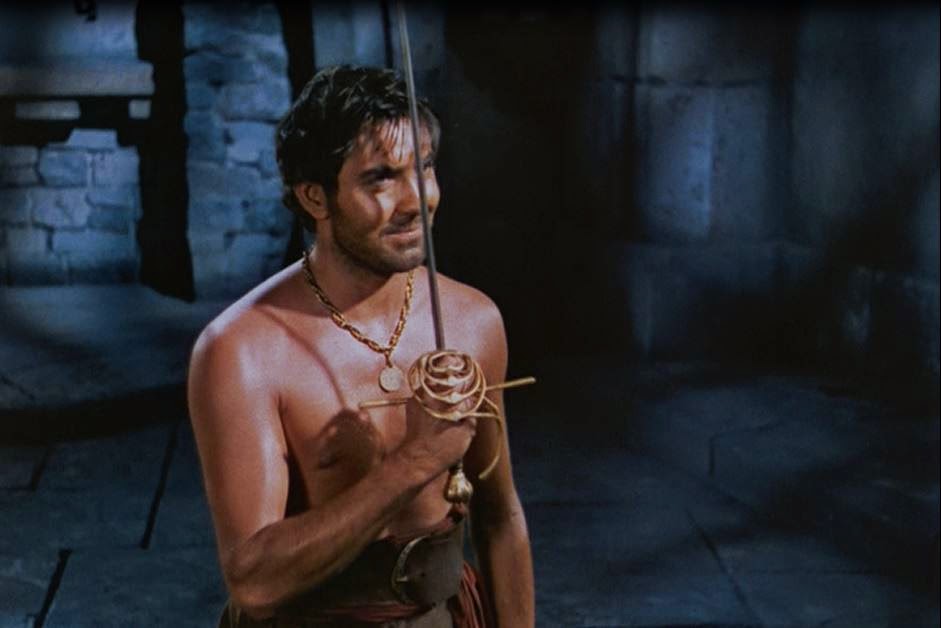 Frankly, if I'd been confronted by a shirtless, scruffy Tyrone Power brandishing a beautiful sword, I probably would have swooned on the spot to make myself easier to tote.  However, Lady Margaret is made of sterner stuff than I (being played by Maureen O'Hara, after all), and instead she tries to threaten her way free.  He disarms her handily, then tries to kiss her, saying he always samples a bottle of wine before he buys it.  When he does manage to kiss her, she bites him, so he does what any self-respecting pirate would:  slugs her and prepares to carry her off to his ship. 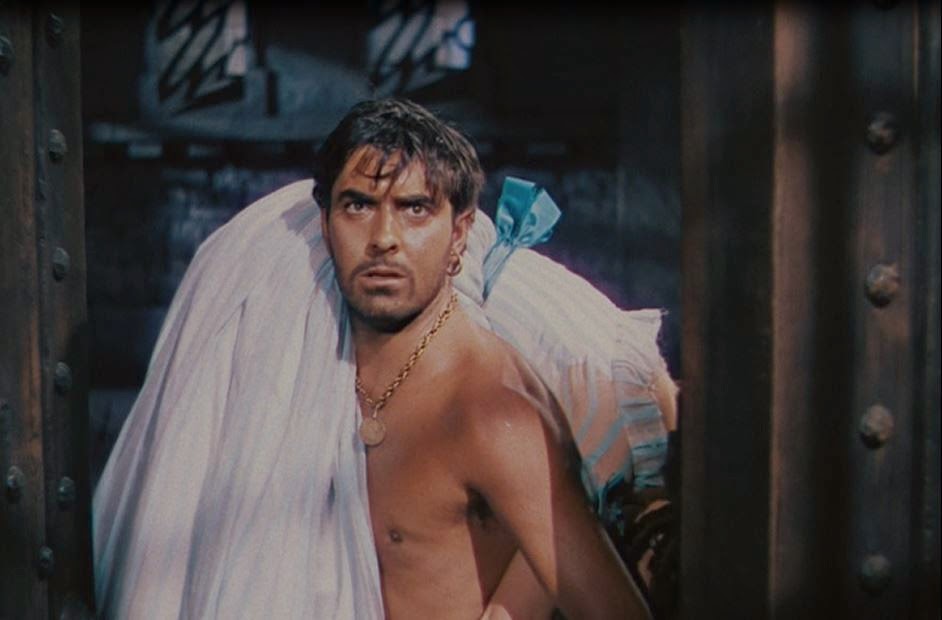 But when he opens the door, what to his wondering eyes should appear but Captain Henry Morgan (Laird Cregar)!  Freshly pardoned by the English government and set up as the new governor of Jamaica! 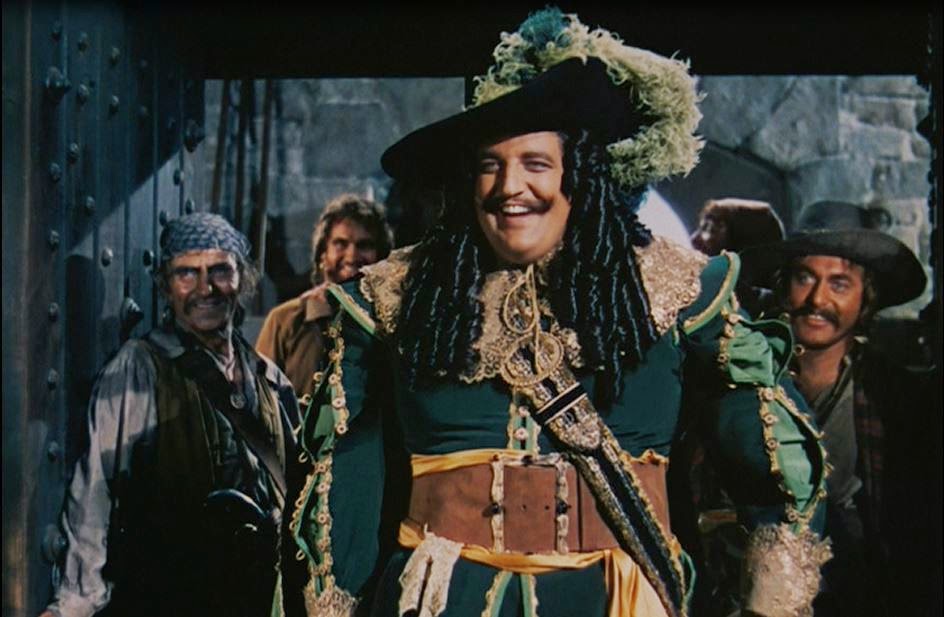 Captain Morgan announces that peace has been declared between England and Spain, and that as governor, he's giving all pirates the choice of either stopping their piratical ways and settling down on land he'll give them, or else leaving the Caribbean for good. 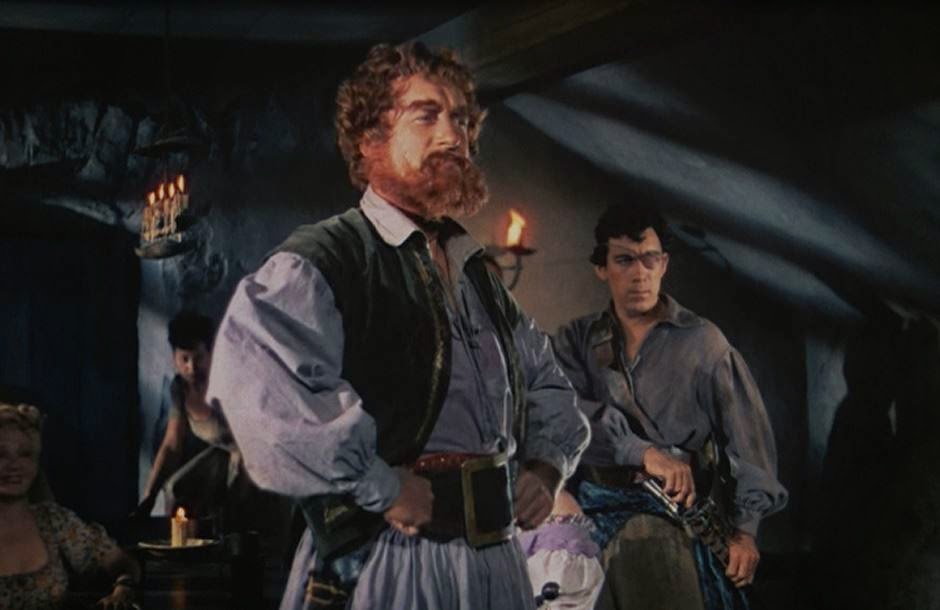 Of course, that doesn't sit well with every single pirate, particularly Captain Leech (George Sanders) and his menacing pal Wogan (Anthony Quinn).  They declare they think that Morgan is an English spy and that they're going to continue pirating if they darn well please, and don't start ordering them around!

But Jamie Boy agrees to stop being a pirate and instead become Governor Morgan's right-hand man.  And then we have the ceremony where Morgan gets installed as governor publicly, and Lady Margaret is very upset by having a pirate as a governor, especially since it means Jamie Boy is around to bother her now.  AND he's sleeping in her old room at the governor's palace.  She flounces out into the garden, Jamie Boy follows her, and we have my favorite scene in the whole movie. 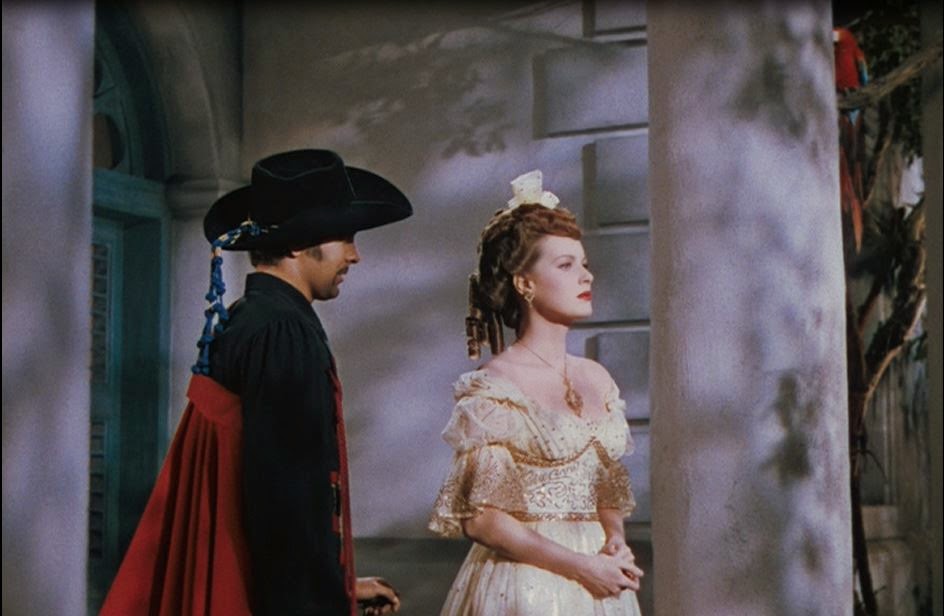 Jamie Boy tells her that he's learned a whole new set of manners, and that now, instead of hugging and squeezing a woman into loving him, he's going to try his hand at being a gentleman. 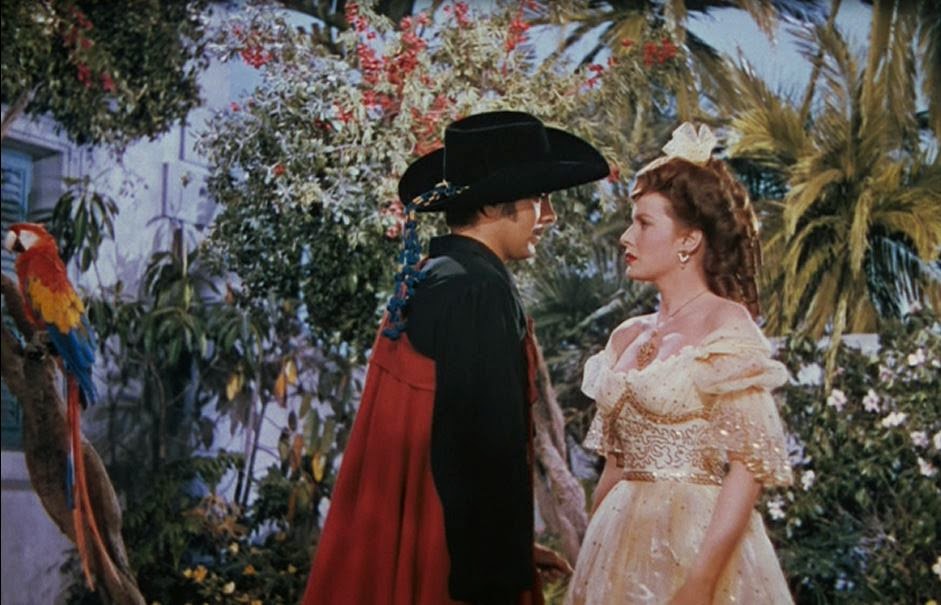 And even with him looking this splendid, she still keeps glaring and yowling at him! 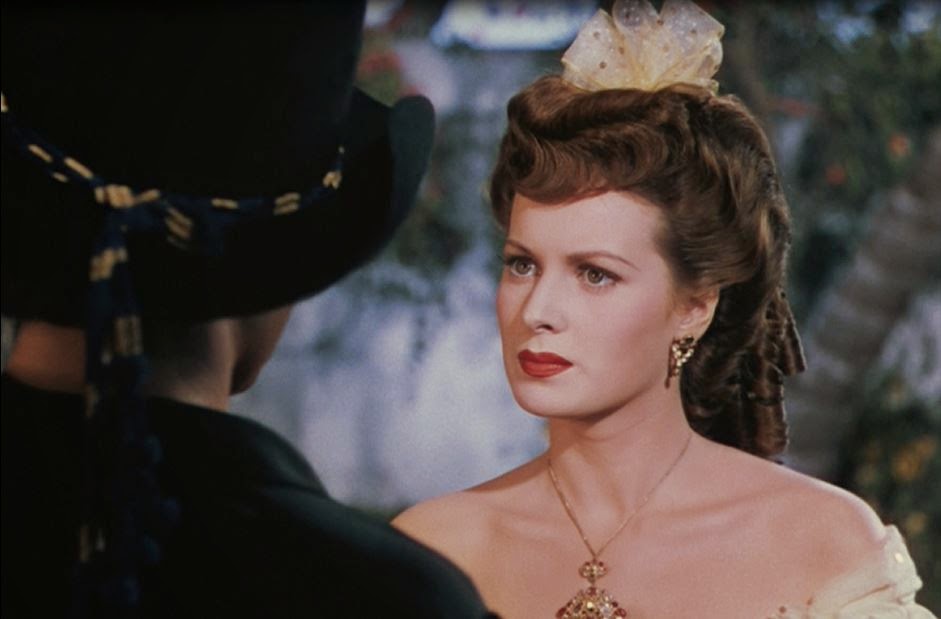 How on earth she can resist him in this outfit, I don't know.  But she does.  Like I said, sterner stuff than I'm made of. 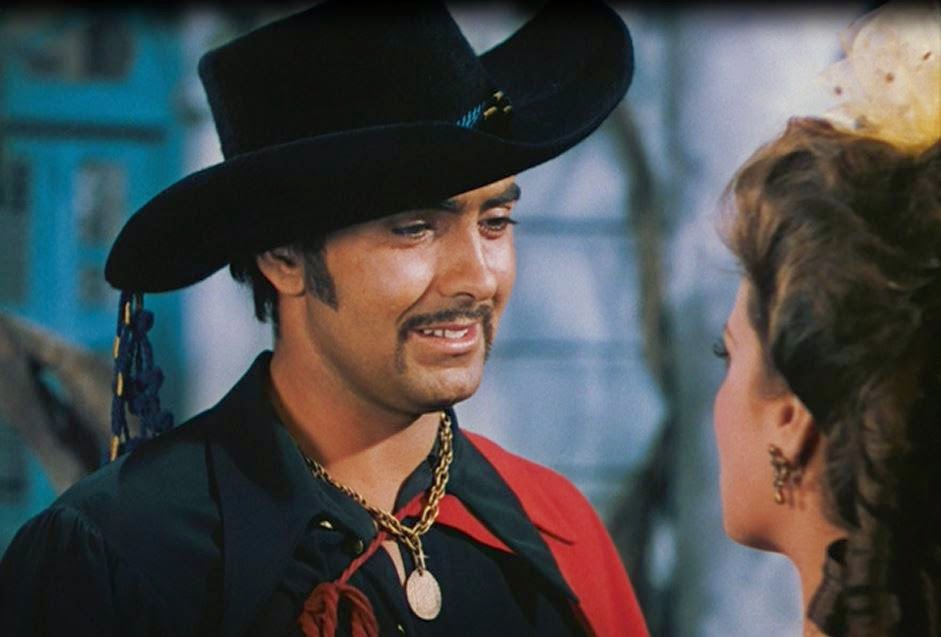 Actually, that's what I like best about this movie -- the way these two characters grow.  They're both very selfish and proud, and they both have to learn to think about someone other than themselves before they can find love and happiness.  It's a very sweet moral, for a pirate movie, but don't worry -- it's not all about the romance.  It's mostly about the swashbuckling, and they have a sword fight every ten minutes or so just to keep things peppy.

Lady Margaret has a fancy-pants fiance named Roger Ingram (Edward Ashley), who Jamie Boy refuses to duel with because he's promised not to kill any tame rabbits today.  Which is important to the plot, but also, I wanted to mention him so I could show you this shot of how awesome Jamie Boy's cape is: 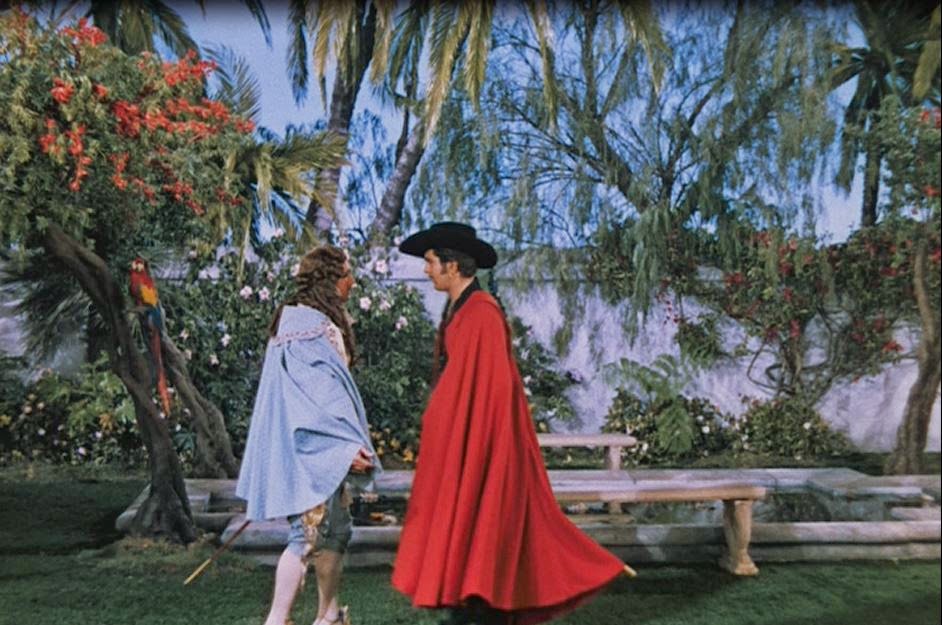 That rascally Captain Leech continues pirating all around the Caribbean, and the people of Jamaica think Governor Morgan is feeding Leech information, so Morgan sends Jamie Boy and a couple other trustworthy captains out to find Leech in Tortuga and bring him to justice. 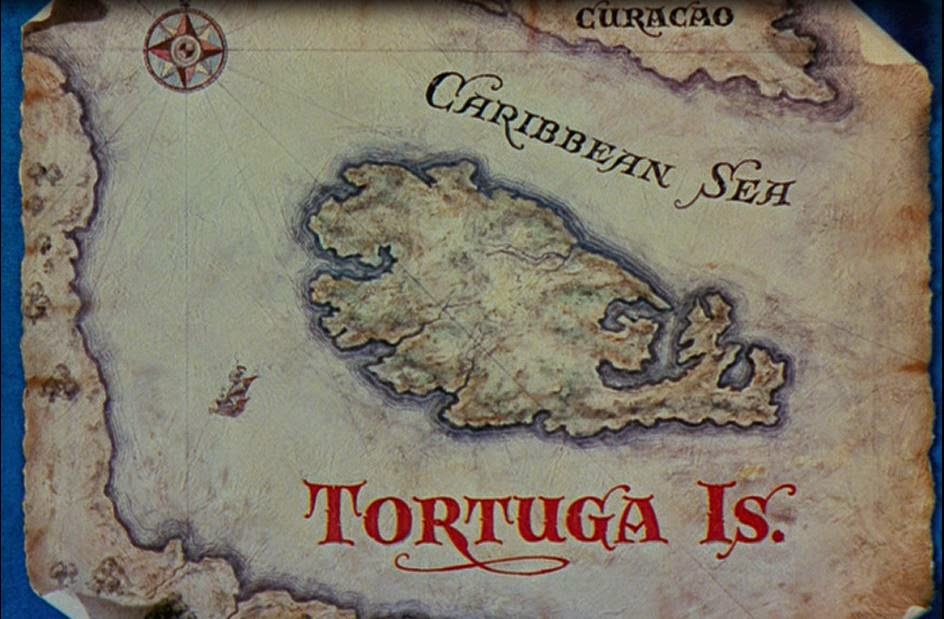 Leech does have a spy on Jamaica, so he knows to run away from Tortuga before Jamie Boy ever got there.  Jamie Boy heads back to Jamaica to figure out who the spy is, and stomps into the assembly room or whatever it is, looking fearsome and delicious again.  The Jamaican gentry think it's either Morgan or Jamie Boy who's the traitor, and Jamie Boy gets really angry and declares he'll find Leech and stop him or die trying.  Or something like that -- I get distracted by the jaunty angle of Jamie Boy's hat and don't pay close attention to dialog in this scene. 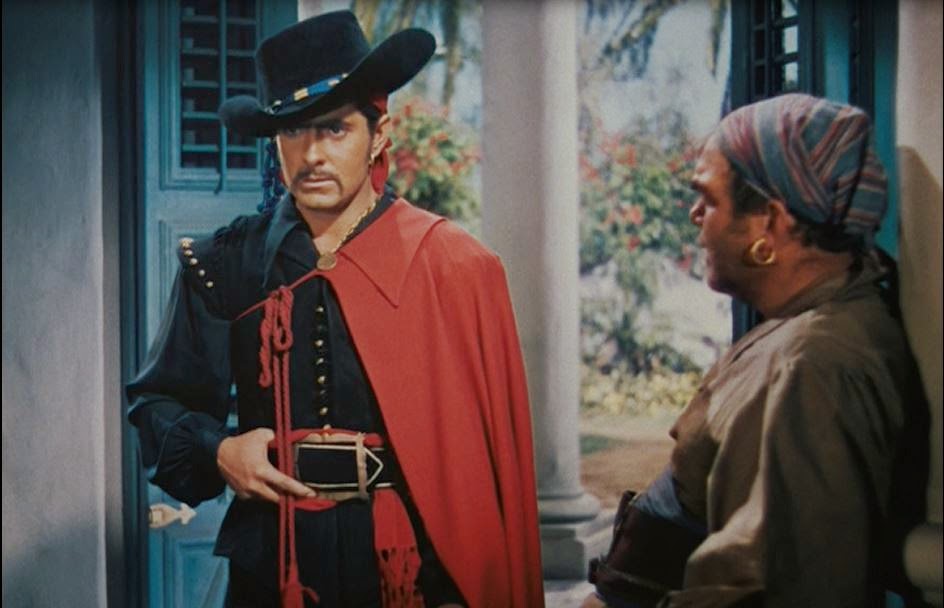 Before he sets sail, Jamie Boy kidnaps Lady Margaret on the eve of her wedding to the tame rabbit, with the help of his trusty sidekick Tommy Blue (Thomas Mitchell).  Tommy Blue calls her a "flouncy wench" and declares she's more trouble than she's worth, but he helps anyway. 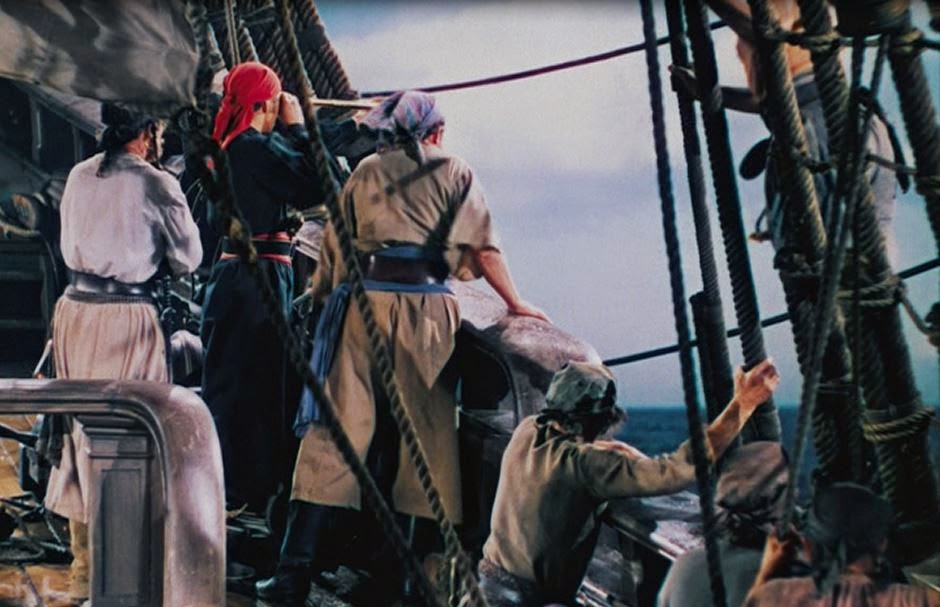 They set off to find Leech, but he finds them first and prepares to attack.  Jamie Boy decides the only way to save himself, his ship, and Lady Margaret is to pretend he's gone back to piracy and join up with Leech.  When Lady Margaret comes out on deck, there's a delightful shot of her confronting the Jolly Roger as they're preparing to run it up. 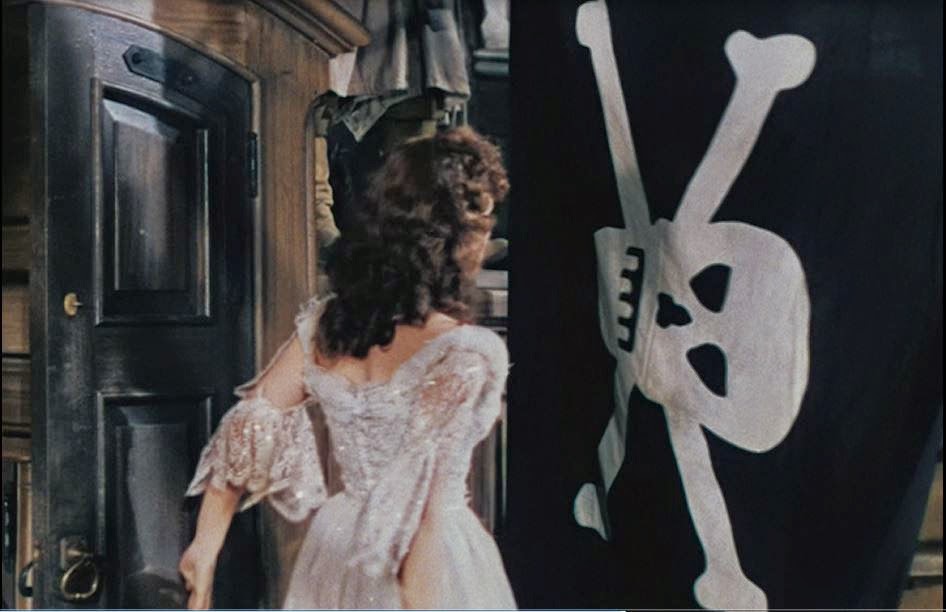 Leech sees their flag and comes over to parley, but he's not convinced.  Jamie Boy claims he and Lady Margaret are married, and she has the good sense to not disagree.  Leech signs articles with Jamie Boy, but insists Jamie Boy and Lady Margaret come sail on Leech's ship, the Black Swan, as an assurance of their loyalty. 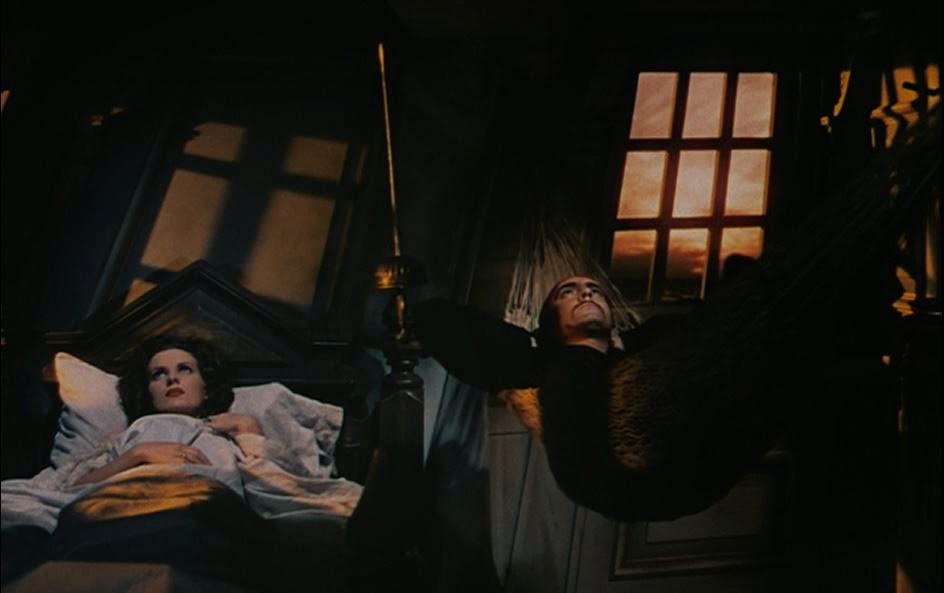 They have to share a cabin on the Black Swan, but Jamie Boy courteously cedes the bed to her and sleeps in a hammock.  And looks all wistful and dreamy.  Honestly, has there ever been a more handsome pirate?  I think not. 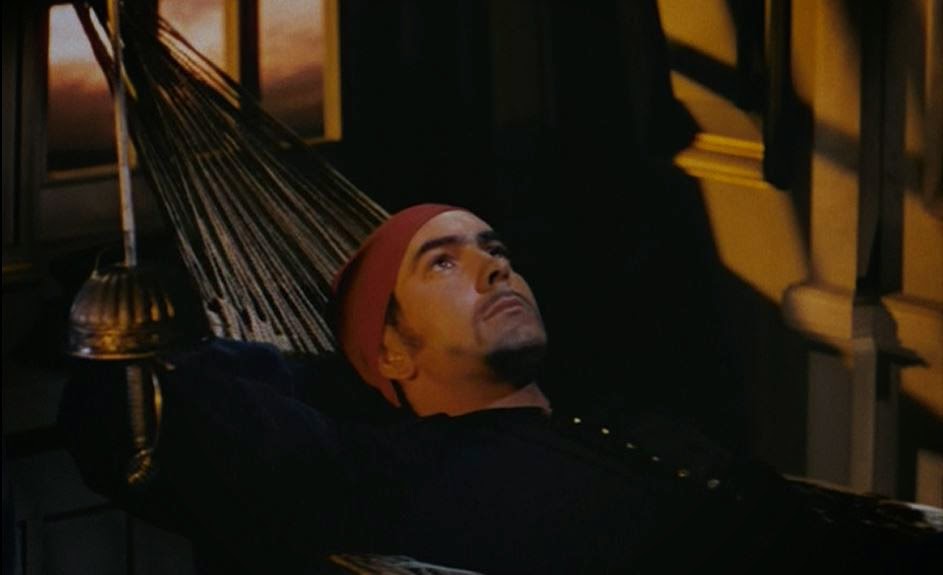 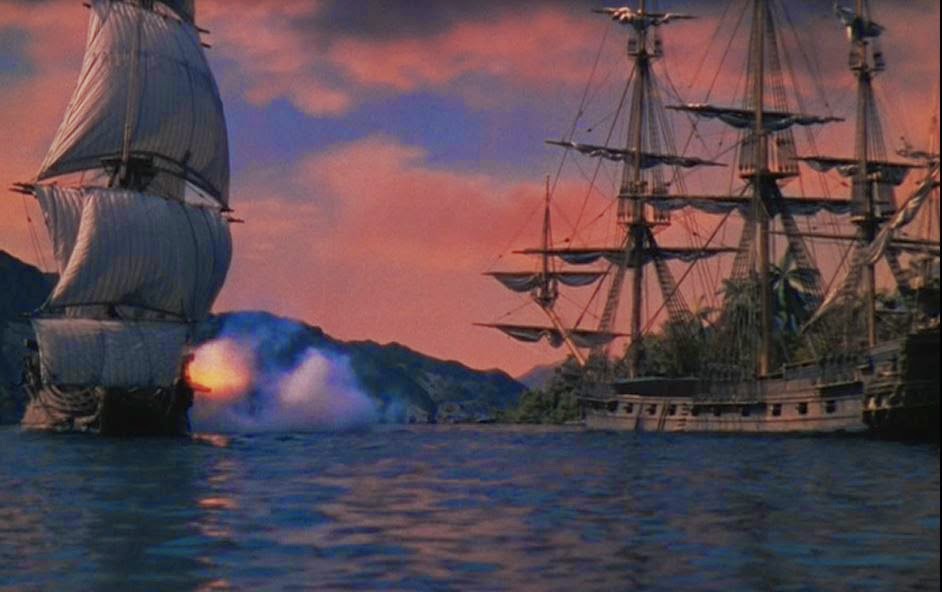 I'm not going to tell you exactly how it ends.  Watch it for yourself to see if Jamie Boy finally wins the affections of Lady Margaret, or if he dies in glorious battle with Captain Leech, or what.  Seriously -- this is a must-see pirate movie, and it's not hard to find on DVD.  You can pick up a used copy on the Barnes & Noble website for $7, or a brand-new one on Amazon for under $20.  Also, any self-respecting library should have this.

Is this movie family friendly?  Well, I'm not going to show it to my six-year-old just yet, but that's because I think the scene with Jamie Boy on the rack might worry him.  The action is all non-bloody, even when someone gets run through with a sword.  Lady Margaret does have her (non-bare) ankles and calves felt up on a couple of occasions, not to mention Jamie Boy forcing a kiss on her, but that's as racy as it gets.  And there are zero bad words.

Now, let's discuss those costumes a minute.  Specifically the glory and splendor that is Jamie Boy's black outfit with the swooshy red cloak/cape.  This is, hands down, the best pirate costume I have ever seen.  A screenshot can't show you how awesome the cloak in particular is.  I wish I knew how to create a GIF so I could show you how he can swoop the long right end of it up and over his left shoulder -- it's so supremely cool that if I had a cloak like that, I would wear it All The Time. 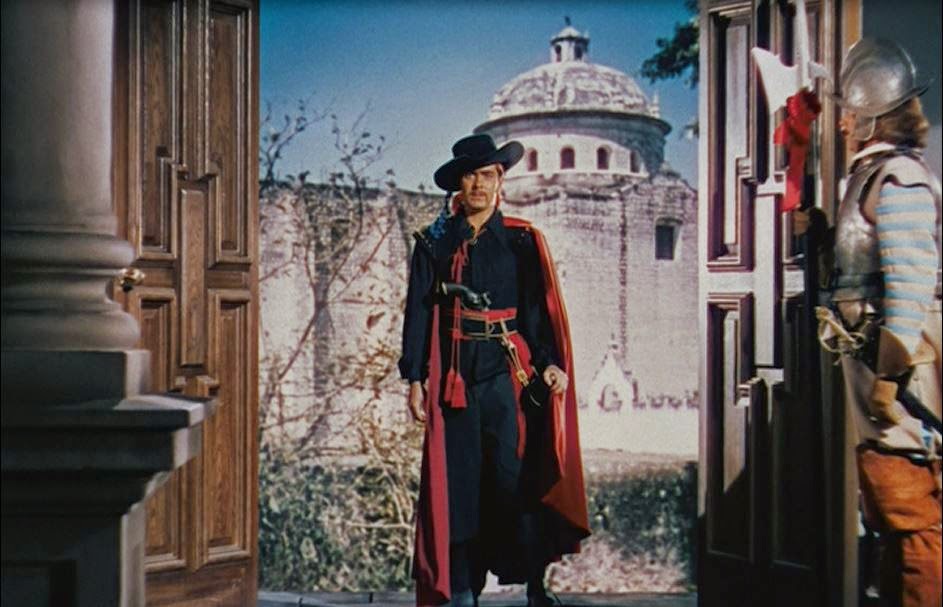 I probably should have screencapped a few more of Lady Margaret's costumes, but I did get long shots of a couple.  This one makes her look a little bit like Glinda the Good Witch, but it's sparkly and looks soft, and I would wear it if I had the figure for it.  Or a really good corset.  I don't much care for the little poofy bow on top of her head, but she pulls it off.  Because she's Maureen O'Hara. 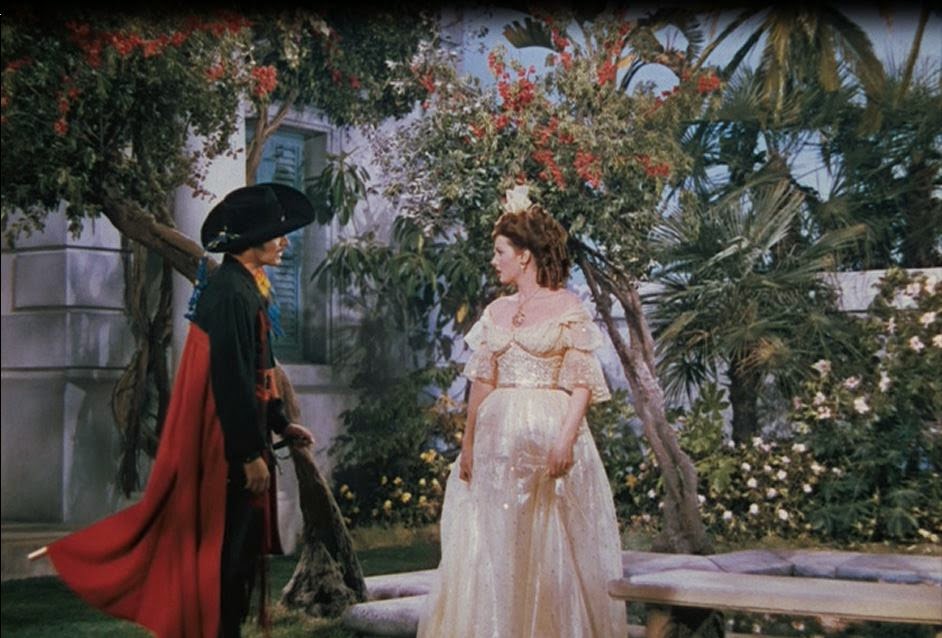 I like this dress of hers best, with its layers of sheer and flimsy stuff, and that trailing scarf/wrap thingie.  It's the one she gets kidnapped in.  She has a couple others that are not a pale peachy color too, but I couldn't get good long shots of them. 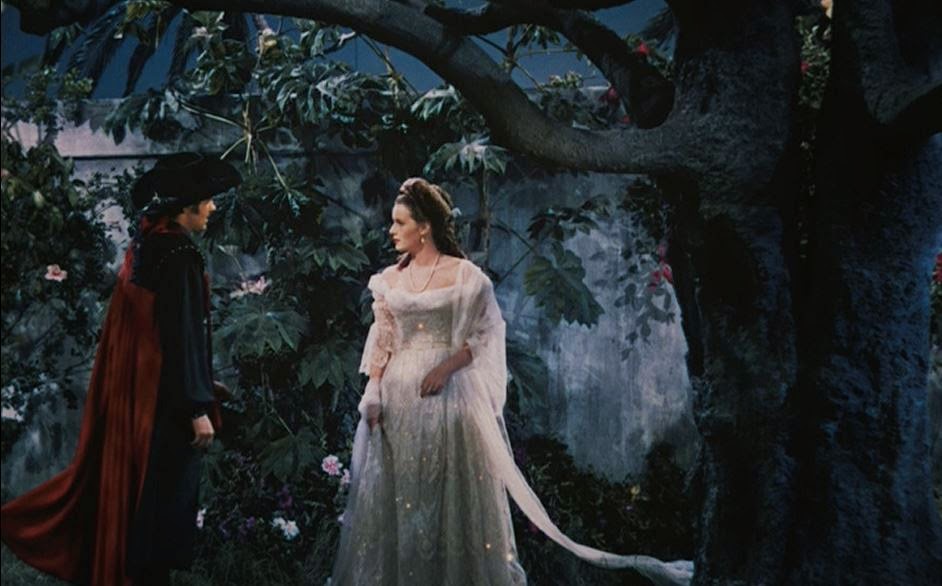 Here's the trailer, if you want a sample this bottle of wine before you buy it: