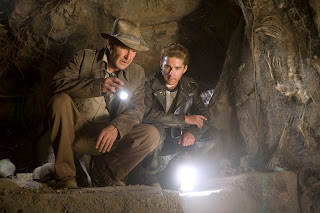 Um, yeah, so... wanna know my reactions to Indiana Jones and the Kingdom of the Crystal Skull?

Giddiness. First and foremost, there's giddiness. It was all I could do not to actually cheer when the Lucasfilm logo appeared on screen and I truly realized I was about to see Indiana Jones on the big screen for the first time. On the way out of the theater, I had to try very hard not to start skipping. Or jumping up and down. Even now, nearly 24 hours later, I'm still giddy when I think about it, full of giggles I can't suppress. I'm actually thinking about ordering an Indy t-shirt online. Yeah.

It's not a perfect movie -- it's nowhere near as brilliant as Raiders of the Lost Ark. But I'd put it on par with Last Crusade, and it's head-and-shoulders above Temple of Doom (which I've only seen once and, despite my devotion to both Harrison Ford and Indiana Jones, don't wanna see again). The plot is complex, but not convoluted, and my suspension of disbelief was only over-stretched once. I'll put more spoily comments below, but put them in white, so only highlight them if you've seen the movie or don't mind spoilage.

Okay, the only time my disbelief was stretched instead of suspended was when they went over the three waterfalls in their little WWII Duck-like vehicle. That did honestly make me go, "Yeah, right." Other than that, I could go with everything as much as any other Indiana Jones movie. The aliens, the weird power of the crystal skull to communicate if you look in its eyes -- I could deal with those. Even Indy surviving a nuclear blast by hiding in a refrigerator (and surviving being tossed around in said fridge a whole lot) -- I could accept that. This is Indiana Jones we're talking about, after all.

I went into this movie hoping to like it, and I did. In fact, I was pleasantly surprised to like Shia LaBeouf, who I was feeling the most iffy about pre-viewing. He had a good presence, good chemistry with Harrison Ford, he wasn't snotty enough to tick me off, but had a nice slightly rebellious thing going on. Plus, what a great entrance he had, so hat-tipping to Brando in The Wild One. I laughed out loud at that, which made a couple of people around me look at me funny, but it just tickled me.

So yup, I dug it, I hope to see it again next weekend with Johnnycake and Dimples ( who were supposed to come up this weekend, but J got a cold), and I expect to own it on dvd. It gets only one Warhead, so hooray for Indy!
Posted by Hamlette (Rachel) at 3:59 PM