Oh dear. I think I've got a crush on Peter Lawford. I just watched Easter Parade (1948), and oh my goodness! What is wrong with Judy Garland in that movie? Sweet, dashing Peter Lawford falls in love with her, and she refuses him because she's in love with Fred Astaire? Join me as I shake my head, squeeze my eyes shut, and say, "HUH?" Not that Fred wasn't playing a nice guy, but Peter's character was no slouch either. And I'm sorry, but Fred Astaire looks like some kind of insect, with a shiny head and sticks for arms and legs. Whereas Peter Lawford, especially at the tender age of 25, looks like... okay, the only comparison I'm coming up with is a slice of mocha cheesecake, smooth and rich and delectable. And did I mention he has dimples?

I admit it -- I'm a sucker for dimples. Cowboy has them, Dano's developing them, and yeah, if they're not doofy, over-emphasized dimples, but natural and only there when a guy flashes a roguish smile... bring me my swooning couch!

But wait a minute -- I've already got a fling going on this spring! I can't start crushing on Peter Lawford when I've been crushing on Joseph Cotten for a couple of months now! Ack! Too many handsome new men in my life! Ack! Whatever shall I do? 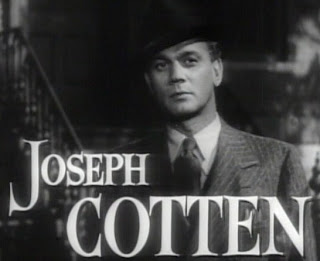 Yes, it's true, I got a thing for Joseph Cotten when I first watched Shadow of a Doubt (1943) a couple months ago. He's a bad boy in it, and he intrigued me, so I picked up Gaslight (1944) at the library the next week, and he was a good guy in it, and I was hooked. So then I watched The Third Man (1949) and decided I definitely need to find more of his movies. He's got this nice guy thing, mixed with a sort of lost puppy look sometimes, like a little baby Beagle that needs a home. Yes, definitely a Beagle. Whereas Peter Lawford is more of a sleek black Labrador.

I suppose I shall just have to deal with two new men in my movie life and keep finding more of their movies to watch. I do have Ocean's 11, so I can see Peter in that, and I have a couple of Joseph Cotten's movies recorded off tv that I've never seen yet, so I can keep seeing him as well.

Good thing my real love life is so uncomplicated!

Oh yeah, I liked Easter Parade a lot, although some of the numbers got a bit long and "why are we here?"-ish. But some, like "A Couple of Swells," were magical. I liked it a lot better than the first time I saw it back in high school, probably because I'm used to Fred Astaire now. This was the first thing I ever saw him in, and I didn't much care for it, being in a major Gene Kelly groove at the time. I still prefer Gene, but I'm used to Fred now. But of course, I mostly liked it better now because of Peter Lawford :-9
Posted by Hamlette (Rachel) at 2:37 PM