I expected to post a birthday greeting for Rudolph Valentino here today. And probably link to something nifty on YouTube that celebrates him. Like this montage of Rudy's smiling scenes. Who can resist that grin or those eyes? Swoon. Rudy certainly knew how to cast a spell.

What I didn't expect to post today was a complete reversal of my opinion of Dano's pediatrician. We've been to her twice before, and I fully intended to talk to the receptionists today and ask to switch to another doctor in the pediatric group, because this doctor and I just do not mesh well. The first two visits, she was all about telling me what to do, not discussing different options, and was just really brusque and... okay, I'll say it: she was too much of a Yankee.

But today, this doctor was all smiley and friendly. She called Dano "cutie" like nine times and complimented what a strong, healthy boy he is. She discussed possible new foods for him to try and a time-frame for him to try them, rather than handing me a sheet of instructions and saying, "Follow this." In short, I would be wondering if she was either bi-polar or had an evil twin, but for one fact:

She's now pregnant. With her first kid. And this seems to have made all the difference.

So I'm sticking with this doctor, at least for now, although she'll be on vacation the next time I need to take Dano in, so I'll end up seeing a different doctor anyway. But yeah... rarely have I had my opinion of a real person so utterly reversed. I change my mind about actors from time to time (usually when I find out someone I'd labeled "airhead" or "pretty boy" actually has talent), but I can't remember the last time I decided someone I had strongly disliked was actually okay after all. Probably because people I dislike rarely have such a marked reversal in attitudes and 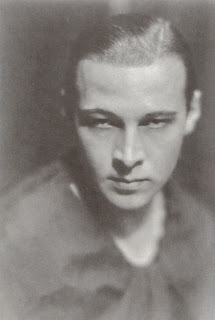 And okay, I need to link to one more Rudy vid: "The Shiek's Physique," a short he filmed during his big dispute with his studio. They refused to let him make any movies, but he was able to make this short, which kept him in the public eye. If you watch nothing else, watch 0:50-1:00 of this -- it cracks me up every time I watch it.

And okay, okay, one more.

If that's too much smooching for you, check out The Menace Collection.