I watched Jumbo (1962) yesterday. I think this must be my month for unusual casting, because first there was Peter Lawford in Easter Parade, then Clifton Webb in Stars and Stripes Forever, and now... Stephen Boyd?

Yes, ladies and gentlemen, he-who-played-Messala-in-Ben-Hur made a musical. He even sang a song, though I'm sure the voice was dubbed. And he actually looked quite at home, not just on the set of a musical, but in a circus tent! DKoren, if you've never seen this, you really should, because he is 100% lunchable here! He shows up in a turtleneck, and I normally loathe turtlenecks, because most people cannot 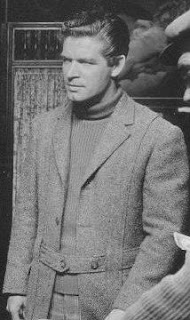 wear them well (Val Kilmer being a notable exception). But Stephen Boyd doesn't just wear that turtleneck well, he makes it look sexy! And that's a pretty rare feat.

So anyway, the Jumbo in the title is a trained elephant who's the star of a little family-owned circus. Jimmy Durante and Doris Day are father-and-daughter circus owners and performers back when circuses had one ring and paraded down main street of every small town they set up near. Jumbo is an exceptionally well-trained elephant that this other circus owner wants. A lot. This other owner, played by Dean Jagger (what? Dean Jagger as a bad guy? Noooo!), has tried repeatedly to buy Jumbo, or the entire circus, but Jimmy Durante always refuses, even though he's up to his famous schnozz in bills and has a gambling problem.

Enter Stephen Boyd in a turtleneck. From the first time we lay eyes on him, we can tell he is Up To Something, but it takes most of the movie for Doris Day and company to figure that out as well. Mostly because he keeps distracting everyone by walking tightropes or wearing tight white t-shirts that show off all those muscles he acquired by driving chariots a few years earlier. After some skulduggery and remorse and penitence, there is a happy ending, and when you get to the part where they start singing about spangles and stardust, just stop the movie. Because they go on for about ten minutes, singing the same song in an ever-more-elaborate parade of costumes. So just end it after one chorus, and all is well.
Posted by Hamlette (Rachel) at 10:22 AM