Way back when this movie came out, my brother and I pooled our money and bought the soundtrack together because we loved the movie so much. We listened to it All The Time. We especially thought it was awesome as background music when we were playing with our Star Trek action figures -- we memorized which tracks were which so we could cue up exactly what we needed for whatever was going on in our tiny fictional universe. 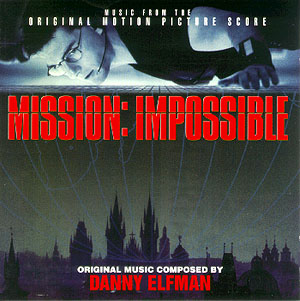 So, today I'm going to share my favorite tracks from the soundtrack. And I'm of course going to begin with the iconic theme song. It's an instant smile-inducer for me :-)
My mom had this book from the 1960s that had the sheet music for the theme song from the original TV show, and I figured out a jazzed-up version of it to match this one and memorized it. Did I mention that I really love this soundtrack (and movie) a lot? Thanks to this, Dick Tracy, and Men in Black, Danny Elfman was possibly my favorite composer in the '90s.
I think my favorite track of all is "Zoom B" because it's basically an adrenaline rush set to music.
But I also love "Betrayal." It's very minor, and feels shadowy, mysterious, kind of chilling.
Okay, that's it for today, my friends. As Jack Harmon says, hasta lasagna!
(This review originally appeared here at J and J Productions on August 15, 2015.)
Posted by Hamlette (Rachel) at 7:22 PM