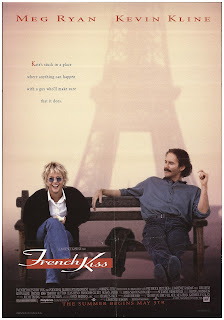 I have two very strong memories attached to this movie.  The first is being in my mid-teens and seeing it at the video rental store, and really wishing I could watch it because it starred Meg Ryan and Kevin Kline, and I liked both of them from Sleepless in Seattle (1993) and Dave (1993), respectively.  But with a title like French Kiss, this must surely be the sort of movie I could never watch with my parents.  In fact, I think I assumed it was rated R.  It took me a while to even work up the courage to read the back of it.  I read the backs of most video cases.  Obsessively.  Chalk up my vast knowledge of who is in what movie with whom, even if I've never seen the movie, to me spending hours at Walmart and the video store just reading the backs of video cases.  My mom would shop, or look for a movie to rent for the family, and I would read.
Okay, that's the first memory.  The second one is from my freshman year of college, when a friend invited me to go watch a movie in someone else's dorm room.  I almost never turned down such invites, unless I learned the movie was one I wouldn't feel comfortable watching, so I blithely headed down the hall to the watch party.  Popcorn was also involved, I remember that.  I can't actually remember whose room it was, even though I have a clear picture of it in my head, which means it wasn't a friend's room, but definitely a friend of a friend.
The movie we were going to watch?  French Kiss.  Cue a surprised me settling down near the door in case I found it to be an uncomfortable movie.  Any nakedity and I was out of there with a handy excuse about forgetting to study for something -- everyone knew I studied a lot, so it would be a little bit believed.  To my delight, although there was some innuendo and a breif trending-toward-sex-but-not-there-yet scene, the movie was actually only PG-13.  And it was WAY better than I had even hoped.  Why?  Because it was not just a rom-com, it was also a cat-and-mouse chase with a French detective hunting down a friend he thought had stolen some jewelry.
Um, yes.  So much awesomeness.
Kate (Meg Ryan) is engaged to Charlie (Timothy Hutton).  They are a cute and quirky couple living in Canada, getting ready to get married and buy a house together.  Charlie is Canadian, but Kate is American and working on getting her citizenship changed.  One assumes that will happen easily once they get married.
Charlie has to fly to Paris for a business thing.  Kate hates to fly.  No, Kate is terrified of flying.  She's even done fear-of-flying therapy sessions to try to get herself on a plane.  No can do.  So, Charlie flies to Paris for his business thing, leaving Kate in Canada to start the house-buying process without him.

And then, of course, it all falls apart because we wouldn't have a movie without it all falling apart.  Charlie calls from Paris, drunk, and breaks up with Kate.  He's met a French goddess (you must pronounce it goddess and not goddess -- it's a thing) and is in love with her now, and he's never coming back.

Does Kate cry?  Yes.  Does Kate mope?  Yes.  Does Kate get super duper angry, buy herself a plane ticket to France, and march herself onto an airplane?  Yes.  I mean, we have to have some way of getting Kate to France so that the double entendre of our title will be a double entendre instead of a single one.  (Did you know there IS such a thing as a single entendre?)
On this fateful flight to France, Kate meets Luc (Kevin Kline).  (By the way, you must pronounce his name correctly -- Leuuuuuuuuc, not Loook -- or he will frown at you with his heavy moustache and expressive eyebrows.)  Kate and Luc are total opposites.  Luc has a secret.  Kate is the opposite of secretive -- she tells Luc her whole sad story even though she can't stand him because he is French.  (Kate believes that 'French' is a synonym for 'liar with bad hygiene.')
Once in Paris, of course, Luc and Kate go their separate ways.  Luc runs into an old friend, Inspector Cardon (Jean Reno).  Luc, we discover, is a thief.  Cardon assumes he has stolen something and smuggled it into the country.  But, they're friends, and Cardon owes Luc a life-debt, so he just keeps a really close eye on Luc and tries to convince him to behave.  A lot.
Luc is not the behaving sort.
Kate and Luc run into each other over and over in Paris.  Kate has found her Charlie and his goddess, and she doesn't know what to do next because she never thought farther than showing up.  Luc needs Kate's unknowing help to transport something precious out of the city.  So, Luc starts to help Kate figure out how to interest Charlie and win him back, which will involve them following Charlie out of Paris.  And, of course, Kate and Luc start to like each other once they discover that one of them is not quite such an uptight American and the other is not quite such a hygiene-deficient Frenchman as they both first assumed.
(SPOILERS about the ENDING in the next paragraph...)
Without Luc knowing it, Kate keeps him out of major trouble.  Meanwhile, Luc helps Kate enchant Charlie, even though he secretly has become enchanted with her himself.  And it all ends up super happily at a vineyard in the French countryside.  Even Inspector Cardon gets a happy ending!
(END SPOILERS)
Is this movie family friendly?  Um, no... but it could be, with a filter.  There's a bit of bad language, mostly at the beginning, but some sprinkled here and there too.  There's quite a lot of innuendo and some suggestive dialog, but most of it is fairly oblique, including a recurring and humorous conversation about erectile dysfunction that never says outright what they're discussing in so many words.  And there is the aforementioned scene where two different couples wind up in bed, semi-unclothed and all over each other, though there is no actual "love scene."  That might be the hardest thing to edit out, as the way that scene ends is quite important to the plot, but it could probably be made to work. 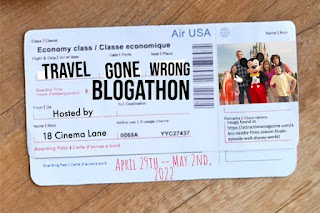 This review is my contribution to the Travel Gone Wrong Blogathon hosted this weekend by 18 Cinema Lane :-)
Posted by Hamlette (Rachel) at 5:39 PM