Gene Kelly has been a favorite of mine since my teens.  There was a time when he was one of my top favorite actors, and he's still in my personal pantheon, just a little farther down now.  Today, I present to you my ten favorite movies of his.  They're obviously mostly musicals... but not all! 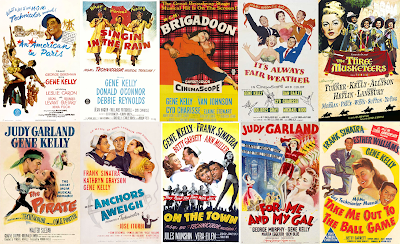 1. An American in Paris (1951)  An American GI (Gene Kelly) stays in Paris after WWII and pursues his dream of being a great painter.  He gets tangled up with two women, one (Nina Foch) who buys his art and things that means she can buy him too, and one who is a quiet dancer (Leslie Caron) engaged to another man.  I love the music in this movie so much -- George Gershwin is one of my favorite composers, and I love seeing how they fit so many of his famous songs into the story, making Ira Gershwin's lyrics move it along.  For many years, I didn't realize the songs weren't written FOR the movie, they fit so well!

2. Singin' in the Rain (1952)  A famous silent movie star (Gene Kelly) and his best friend (Donald O'Connor) and a nobody dancer (Debbie Reynolds) muddle their way through the transition from silents to talkies while trying to avoid the machinations of a scheming actress (Jean Hagen).  I got to take my kids to see this in the theater a few years ago, thanks to the TCM Fathom Events program of showing classics in theaters once a month, and now they love it too :-)

3. Brigadoon (1954)  Two Americans (Gene Kelly and Van Johnson) on a hunting trip in Scotland stumble into the enchanted village of Brigadoon, which appears on earth only once every hundred years.  Naturally, one of them falls in love with a girl (Cyd Charisse) from the village.  It's a soft, magical, mysterious movie, and I used to think it was boring when I was a kid, but I've grown into it.

4. It's Always Fair Weather (1955)  Three ex-GIs (Gene Kelly, Dan Dailey, and Michael Kidd) plan to reunite at their favorite NYC bar ten years after the war ends.  When they do, they discover than none of them is happy with who he's become.  As they get to know each other all over again, they come to realize what they do and don't like about themselves. Gene Kelly co-directed this gem, and it's one of the few times you get to see legendary choreographer Michael Kidd dance onscreen.  The dancing in this is spectacularly inventive -- Gene Kelly performs one glorious number by tap-dancing in roller skates!  This was supposed to make a sort of trilogy with Anchors Aweigh and On the Town, but Sinatra wasn't available, so it didn't.

5. The Three Musketeers (1948)  D'Artagnan (Gene Kelly) and his new musketeer pals (Van Heflin, Gig Young, Robert Coote) try to stop the evil Richelieu (Vincent Price) from taking over France.  This is not a musical.  Gene Kelly does not dance in it.  But he's the most graceful sword-fighter you'll ever see.

6. The Pirate (1948)  A young woman (Judy Garland) growing up in the Caribbean is obsessed with pirates, especially the infamous Macoco.  She meets some circus performers, one of whom (Gene Kelly) falls in love with her and pretends to be Macoco so she will fall in love with him too.  This is meant to be a spoof of the great pirate movies of the '30s that starred people like Errol Flynn, and if you don't take it seriously, it's great fun!

7. Anchors Aweigh (1945)  Two sailors (Gene Kelly and Frank Sinatra) are on leave in New York City.  And they have adventures.  Gene Kelly dances with the cartoon mouse Jerry.  That's pretty much all you need to know to make you want to see it, right?

8. On the Town (1949)  Three sailors (Gene Kelly, Frank Sinatra, and Jules Munshin) are on leave in New York City.  They have adventures.  They fall in love.  They are NOT the same people from Anchors Aweigh.  It is NOT the same movie.  But to tell the truth, I can never really remember what adventure happens in which movie.

9. For Me and My Gal (1942)  Two vaudeville entertainers (Gene Kelly and Judy Garland) fall in love.  He deliberately injures himself so he won't be drafted for WWI, but later joins up anyway.  It's lots of American patriotism wrapped up in song and dance, meant to encourage WWII audiences to support the new war effort, and I really like movies like that, to be honest.  This is also Gene Kelly's screen debut!

10. Take Me Out to the Ball Game (1949)  Two baseball players (Gene Kelly and Frank Sinatra) who are vaudeville performers when they're not playing baseball, get mixed up with gamblers trying to fix the World Series.  And there's romance involving the new lady owner (Esther Williams) of their baseball team.  This is a very fun and cheerful sort of movie, and I really should watch it more often.

This has been my contribution to the With Glamour and Panache: A Fred Astaire and Gene Kelly Musicals Blogathon hosted by Along the Brandywine.  What do you think of my picks?  Do you have different favorites?