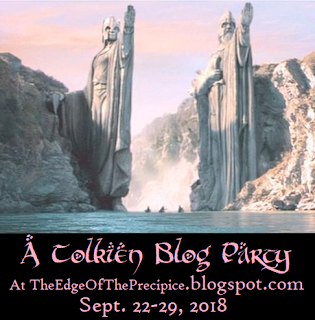 Time to join my own party!  Here are my answers to this year's Tolkien Blog Party Tag, as set forth on my book blog.  If you haven't joined the fun yet, please zip over there and do so!  I've got a giveaway going, and two blog games too.

The Fellowship of the Ring is dearest to my heart, especially the few chapters where the whole Fellowship is together.

2. Do you have a favorite subplot?

I love Sam's character arc.  He goes from quiet, retiring, and hesitant to fierce and even bold.  But who he is inside never changes.  Instead, his true self emerges into the light over the course of the story.

3. What's your favorite theme in Tolkien's books? (Can be in one specific story, or overall.)

4. Do you have a favorite weapon from Middle-earth?

I'm fairly partial to Glamdring and would love to own a replica one day.  Even a tiny letter-opener replica. 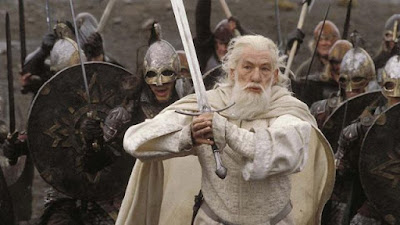 I think I would get bored.  Not enough books.  But I do love simple, gentle, quiet life with lots of gardening and baking and eating.  So maybe if I could be one of the few bookish hobbits, then yes, I would.

6. Do you have a favorite romance/couple?

Faramir and Eowyn are amazing, especially in the books.  Both broken, abandoned, lost people who find healing at the hands of Aragorn and each other.

7. What's your favorite Middle-earth creature? (Can be "real" or "imaginary.")

Ummmmmm... I look a bit like Sigrid, Bard's daughter (Peggy Nesbit) in the Hobbit movies. 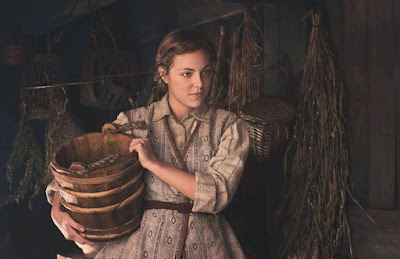 9. Are there any books about Middle-earth or Professor Tolkien (but not written by him) you recommend?

I learned a LOT from both The Lord of the Rings: The Mythology of Power by Jane Chance and Finding God in the Lord of the Rings by Kurt Bruner and Jim Ware.  Click on those titles for my full reviews of them.  I'm also getting a LOT out of A Hobbit, a Wardrobe, and a Great War by Joseph Laconte, which I plan to review for this blog party later this week.  Just have to finish reading it first.

10. List up to ten of your favorite lines/quotations from the Middle-earth books and/or movies.

There is a seed of courage hidden (often deeply, it is true) in the heart of the fattest and most timid hobbit, waiting for some final and desperate danger to make it grow (The Fellowship of the Ring, "Fog on the Barrow-Downs").

And seated a little apart was a tall man with a fair and noble face, dark-haired and grey-eyed, proud and stern of glance (The Fellowship of the Ring, "The Council of Elrond"). 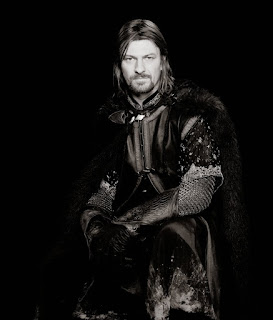 In Rivendell there was memory of ancient things; in Lorien the ancient things still lived on in the waking world (The Fellowship of the Ring, "Lothlorien").

He strode to the archway and stood for some time under the falling rain of the spring.  Then he laughed and shook himself, and wherever the drops of water fell glittering from him to the ground they glinted like red and green sparks (The Two Towers, "Treebeard").

The great horse tossed his head.  His flowing tail flicked in the moonlight.  Then he leapt forward, spurning the earth, and was gone like the north wind from the mountains (The Two Towers, "The Palantir").

The eyes were hollow and the carven beard was broken, but about the high stern forehead there was a coronal of silver and gold.  A trailing plant with flowers like small white stars had bound itself across the brows as if in reverence for the fallen king, an din the crevices of his stony hair yellow stonecrop gleamed (The Two Towers, "Journey to the Cross-Roads").

Proud and grave he stood for a moment as he spoke to the guard, and Pippin gazing at him saw how closely he resembled his brother Boromir -- whom Pippin had liked from the first, admiring the great man's lordly but kindly manner (The Return of the King, "The Siege of Gondor").

And then softly, to his own surprise, there at the vain end of his long journey and his grief, moved by what thought in his heart he could not tell, Sam began to sing (The Return of the King, "The Tower of Cirith Ungol").

Then the heart of Eowyn changed, or else at last she understood it.  And suddenly her winter passed, and the sun shone on her (The Return of the King, "The Steward and the King").

Sam blushed, but he looked gratefully at Frodo, for Rosie's eyes were shining and she was smiling at him (The Return of the King, "The Scouring of the Shire").

That's all for me!  And if you're a Tolkien fan, but haven't join the party yet, you can do that right here.
Posted by Hamlette (Rachel) at 10:48 AM