Happy birthday to one of my favorite actresses, Lauren Bacall!  Today would have been her 94th birthday! 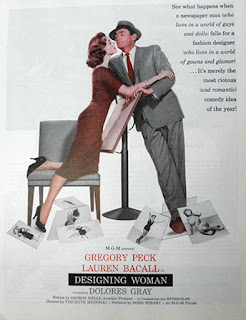 To celebrate, I rewatched Designing Woman for the first time in almost twenty years.  Don't take that number to mean that I don't like this movie much -- far from it!  The truth is, I saw this at a friend's house when I was in college, and I really, really dug it... but it wasn't available on video.  Also, I was a poor college student who couldn't buy every movie she liked.

I'm no longer a poor college student, but I still don't have enough money to buy every movie I like :-(  However, I DO have enough to buy quite a few, especially if I find them used at the thrift store or the local used book/movie store.  (And sometimes online too, yes.)  And a few months ago, I found a Lauren Bacall 4-pack of movies on DVD.  I already had two of them, but I was so excited to find Designing Woman at last that I bought the whole set just to get it.  I held onto it until just the right time for a rewatch, which turned out to be this weekend, in honor of her birthday.

Designing Woman is a gender-swapped Cinderella story.  One of the things that makes it funny is that the guy in the story doesn't realize it's a gender-swapped version until about a quarter of the way through the film.  I really love what this movie has to say about modern gender assumptions, women in the workforce, and the difficulty of striking a balance between personal life and work.  Those themes are just as relevant today as they were when the film was made 51 years ago, which is part of why it works so well still.

The other part, of course, is that the main characters are played by Lauren Bacall and Gregory Peck, both of whom could elevate any ordinary script into something delightful.

But this isn't an ordinary script.  This is a quirky, smart, sharply witty script with class and charm and sizzle.  You can tell from the opening scene that this is a story that doesn't take itself entirely seriously.  How can you tell that?

Easy.  The first scene has Mike (Gregory Peck) breaking the fourth wall, speaking directly to the audience as he explains that he's here to fill us in on the truth about the infamous goings-on up in New York City not too long ago.  Definitely quirky.

Marilla (Lauren Bacall) then gets her chance to assure us she'll be sharing her side of the story as well.  So do Lori (Delores Gray) and Zachary (Tom Helmore) and Maxie (Mickey Shaughnessy).  Throughout the rest of the film, these five characters will give us their thoughts on the story via voice-overs, some of which make me laugh more than the regular dialog.

It all starts in California at a raucous party where sportswriter Mike buys drinks for everyone in sight.  He's just won more than a thousand dollars betting on a golfing tournament, and he's feeling pretty good about himself.

The next morning, he's feeling much the reverse.  Especially when he realizes he can't remember if he filed his story about the tournament with the big newspaper in New York that has made him fairly famous.  He also discovers he only has a few dollars in his pocket -- what happened to that thousand?

Mike runs into a chatty woman by his hotel's pool -- she insists he gave her $700 the night before.  He imagines what that money might have been for and tries to elude her.  But she's persistent.  Finally, she manages to explain to him that she helped him write an article for his newspaper and file it, and he paid her for her assistance.  But she doesn't feel she ought to keep that much money, as surely one little newspaper article can't be worth that much.

He insists she keep it, she insists she can't, and they finally decide to just spend all of it together over the next couple of days before they both have to fly back  to NYC, where they both live and work.

Two days stretches into two weeks, and one quickie wedding later, they're flying back to New York as man and wife.

Mike is excited about the prospect of introducing his new wife to his well-paid, high-flying life.  He knows she's a working girl with a job in the clothing industry and assumes she shares a tiny flat with a friend and will be happy and excited to move in with him.  He's sure his apartment has plenty of room for two, plus whatever bits of furniture and clothes she brings with her.

Yes, Mike is convinced he's Prince Charming and has rescued Cinderella from her lowly city life.

It comes as quite a shock to him when he discovers that nope, she's a wealthy, glamarous, in-demand fashion designer with an apartment that could swallow his whole.  She has sophisticated friends, wears chic clothes, dines well, and is generally so high up the social ladder that they've never met because his associates are beneath hers.  (The whole film was dreamed up by costume designer Helen Rose, and it includes a vast variety of gorgeous '50s clothes.  I could devote a whole blog post to the costumes alone.  Maybe someday I will.)

In other words, she's Princess Charming and he's Cinderelliot.  He takes this reversal remarkably well, all things considered.  He doesn't seem to spend much time obsessing over the fact that his wife is better-paid than he is.  But he clashes with her over her friends, going so far as to make crass assumptions about the sexual orientation of choreographer Randy Owens (Jack Cole, actual choreographer for the film).  The moviemakers upend those expectations too -- Randy Owens may dance like a loony bird, but he has a wife and football-player sons and ends up saving the day at the very end of the film with some inventive fighting-ballet.  (Sorry, probably should've said Spoiler Alert there.)

Mike keeps publishing articles about a mobster who is fixing prizefights.  The mobster doesn't like this.  Mike shrugs off his threats at first, but eventually, his editor convinces him to go into hiding until he's gathered enough evidence for the authorities to step in and take the mobster down.  Mike has a big fight with Marilla right before he leaves -- she found a picture of Lori (Delores Gray), an old flame of Mike's, and thinks he's still carrying on with her on the side.  Mike doesn't tell Marilla where he's going, or what danger he's in, he just leaves, taking along an ex-fighter named Maxie (Mickey Shaughnessy) who is permanently punch-drunk.

Maxie is strange and endearing and as loyal as a bulldog.  He protects Mike against anyone who looks cross-eyed at them.  And the funniest part of the film, to me, comes along while Mike and Maxie are holed up in a hotel, but I won't spoil that bit for you.  Just know that it makes me laugh aloud.

Of course, everything gets resolved eventually.  Marilla's friends help Mike beat the mobsters, Marilla and Mike make up, and the whole film winds up with the main characters assuring us they're all perfectly happy now... or as happy as they can be.

Especially Maxie, the boxer, who's making a come-back, you know.

If Bacall seems a little less than sparkly in this film, I chalk that up to the fact that her real-life husband, Humphrey Bogart, was dying of cancer while they filmed this; he died before it was released.  Bacall more ascerbic and serious than cute and flirty through much of the film, but the chemistry between her and Gregory Peck more than makes up for this.  The two became lifelong friends while filming this movie, and their genuine affection for each other shines.

This is one of those movies where I get a big kick out of spotting familiar faces in small roles.  Dean Jones (That Darn Cat!, The Love Bug, Clear and Present Danger) has an uncredited bit part as a stage hand.

Edward Platt (The Chief from Get Smart) pops up as a mobster.  Richard Deacon (Mel on The Dick van Dyke Show) has a small role as another newspaperman.  But my favorite, by far, is Chuck Connors, whom I love so much as Lucas McCain on The Rifleman, though you  might know him better as the dad in Old Yeller.  He's playing a heavy here, but he's still great fun.

Is this movie family friendly?  Yes.  Marilla does have a habit of nibbling on Mike's ear, and there's a bit of light innuendo here and there that should fly over the heads of kiddos.  No bad language.  A little mild violence in the form of fistfighting.  Cigarette smoking throughout, some alcohol consumption.  I would let my kids watch this. 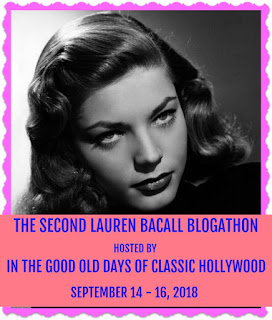 This review is my contribution to the Second Lauren Bacall Blogathon hosted by Crystal at In the Good Old Days of Classic Hollywood.  Follow this link to see the list of all the blogathon entries and celebrate this remarkable, versatile actress!
Posted by Hamlette (Rachel) at 7:38 PM